Guatemalan Stews With Mayan Roots, at Ix in Brooklyn 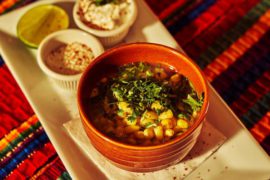 Jocón, a Guatemalan stew, can be so green you’d imagine it had its own Pantone color. As with many Central American stews with Mayan origins, called recados, its body is thickened with ground seeds. When freshly made, it feels almost frothy.

At Ix in Prospect Lefferts Gardens, Brooklyn, the broth varies in color, but always leans French: The chef, Jorge Cardenas, simmers a chicken stock for 18 hours and strains it three times, adding fresh bones and vegetables with each round. Vegetarian customers can opt for the vegetable stock, fortified with cilantro and carrot tops, similarly cooked and strained.

Your chosen broth thins out a verdant purée of pumpkin seeds, cilantro, tomatillo, scallions and green peppers. When the bowl of jocón arrives at the table, it wears a garnish of green beans, a visual hint of the stew’s essence. Hiding inside are white rice, potato chunks big as meatballs and featherlike shreds of chicken. (Some dishes can be made vegan, to order.) Even on a hot day, it’s wildly refreshing.

Mr. Cadenas opened Ix (pronounced eesh) in November 2017 with his cousins Brenda Castellanos and Ana Prince, who opened Taquería El Patron Mexican Grill next door in 2015. (Mr. Cadenas credits his cousins with providing the knowledge necessary to open and maintain a restaurant in New York.) 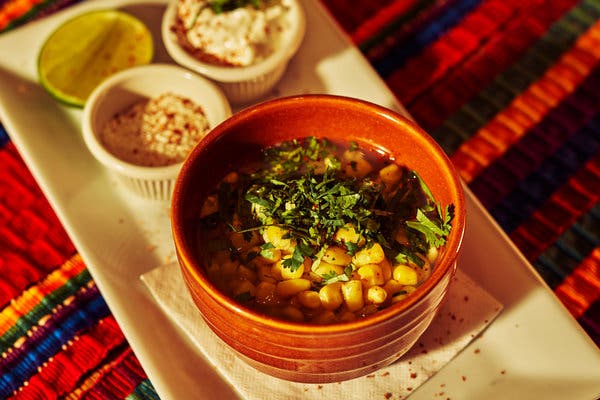 At Ix in Prospect Lefferts Gardens, Brooklyn, the Crazy Corn in a Cup is all about the garnishes: crumbled cheese, mayonnaise and a spritz of lime.CreditAn Rong Xu for The New York Times

The restaurant takes its name from Mayan astrology: Mr. Cadenas’s nahual, or sign, is the ix, a jaguar. This explains the technicolor jaguar that lies in wait on the restaurant’s back wall, its mouth more a smile than a roar.

The casual all-day cafe is a block from Ocean Avenue, the eastern edge of Prospect Park, near the subway station. Its front windows open onto the street, offering neighbors a glimpse of a long coffee bar and a pastry case full of tres leches cake, alfajores and sea salt-caramel lava cake. Here you can buy Guatemalan cacao drinks: pure, unadulterated chocolate or variations like a rose-scented brew studded with toasted coconut shreds.

Mr. Cadenas, a musician who grew up in a family of artists in Quetzaltenango, Guatemala, attended culinary school in Berlin and moved to New York three years ago. He immediately started talking to Ms. Castellanos and Ms. Prince about opening a restaurant, and had already created his ideal menu: a fusion of Latin, French and Japanese cuisines.

“But I moved here and I realized, everybody is doing fusion,” he said. So he cooked the dishes of his childhood — jocón, he said, is a specialty of his hometown — the pre-Hispanic stews and soups (caldos) he grew up eating.

They include pepian, which many consider the country’s national dish. It glows red with roasted tomatoes and toasted guajillo and pasilla chiles; its body comes from toasted tortillas and sesame seeds, which nearly thicken into a sauce when blended.

You can order cacao drinks, inspired by similar beverages in Guatemala, including a frozen version and a rose-scented brew studded with toasted coconut shreds.CreditAn Rong Xu for The New York Times

The stew’s dense smokiness benefits from some of the restaurant’s hot sauce, a recipe from Mr. Cadenas’s mother. It relies on Cobanero chiles, toasted with garlic in a dry pan, then ground together with black salt and drowned in olive oil, which takes on the mixture’s brooding heat. (You’ll need to ask for it; you can also buy a small jar on your way out.)

When doctored up with a spoonful of the hot sauce, a bowl of pepian takes on a curative quality: I imagine it could ax through a particularly stubborn cold, or even a gnarly hangover, though I haven’t tested either theory.

The initial plan for a globalized menu still remains. Pork belly, rubbed in brown sugar and spices and confited, skin-on, in duck fat, shows up next to housemade kimchi in both sandwich and soup. The latter is less fiery, and less red, than many Korean kimchi soups, but its broth still leads with the condiment’s lively pucker, and lets Mr. Cardenas’s chicken stock show off. Smashed between sliced ciabatta in the beleza sandwich, the pork’s soft skin stands out, tearing apart willingly, splitting the difference between the kimchi’s crunch and the belly’s lushness.

Mr. Cadenas is a joyful cook who takes pride in playing with his food. He has special dishes written out on playing cards, which he rotates every once in a while. (To order them, just ask for the secret menu.) Recently there was a spicy cucumber salad with ponzu sauce; rosemary churros; and alphabet soup, a way to keep his youngest customers happy.

Sometimes recipes come to Mr. Cadenas in the middle of the night — he writes down his inspirations and tests the dishes in the morning. Later this summer, he said, he will debut a menu of “stuff that I dream.”

FacebookshareGoogle+sharePinterestpin it
How Much Nature Is Enough? 120 Minutes a Week, Doctors SayA Fractured Ankle Turned Me Into My Father
Latest