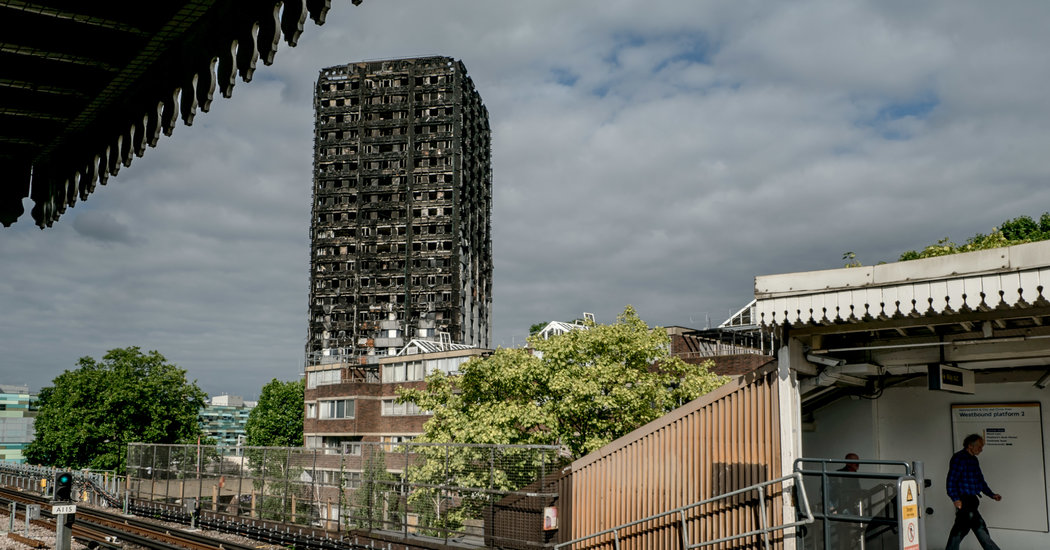 LONDON — A toxic cocktail of chemicals released by the Grenfell Tower fire still contaminated the London area around the building almost a year and a half later, and could pose a serious health risk to local residents and survivors of the blaze, new research has found.

Researchers from the University of Central Lancashire analyzed soil, debris and char samples within 140 meters, or about 460 feet, of the tower in West London and found “significant environmental contamination,” including cancer-causing chemicals and other substances that can cause respiratory and nerve problems.

“There is undoubtedly evidence of contamination in the area surrounding the tower, which highlights the need for further in-depth, independent analysis to quantify any risks to residents,” said Anna Stec, a professor in fire chemistry and toxicity at the university who led the independent study.

“It is now crucial to put in place long-term health screening to assess any long-term adverse health effects of the fire on local residents, emergency responders and cleanup workers,” she said.

Professor Stec’s research found that soil samples within 100 meters of Grenfell Towers contained six toxic chemicals at levels around 160 times higher than those typically found in soils from urban areas. Some of the samples also contained materials used in insulation foams and upholstered furniture that are potentially toxic to the nervous system.

More than 17 months after the fire, researchers found dust and a yellow oily deposit in an apartment 160 meters from the tower containing potent irritants that can cause asthma and other respiratory problem.

In the aftermath of the June 14, 2017, fire that killed 72 people, local residents reported health problems like coughing and vomiting, which they attributed to breathing air polluted by the fire. But public health officials said they had been assessing the air quality since the fire and had found the health risk to be “consistently low.”

Last October, Professor Stec published the preliminary findings of her research that showed high concentrations of potential carcinogens in the area, prompting the government to announce plans to conduct comprehensive soil analysis to check for contamination.

“We take Professor Stec’s findings extremely seriously, and fully appreciate the ongoing health concerns,” the Ministry of Housing, Communities and Local Government said in a statement on Thursday.

“We have established a comprehensive program of environmental checks to fully assess the risks and take appropriate action,” the statement said. “Professor Stec is part of an independent group of scientists overseeing this work and her findings will inform the checks we are conducting.”

The ministry urged residents with health concerns to speak to their local doctors, saying they would arrange for additional health checks.

The shift in the government’s attitude parallels that seen in the United States after the Sept. 11, 2001, attacks.

Rescue and cleanup workers at the World Trade Center were at first allowed to toil there without respirators, and both New York City and federal officials were later accused of playing down the risks from inhaling dust and smoke from the site. In the following years, studies firmly linked the ailments of hundreds of people to that exposure.

Near the Grenfell site, residents responded to the latest evidence of contamination with anger and frustration, saying the findings of the study had confirmed their longstanding health concerns that were consistently dismissed by the authorities as paranoia.

“I have questioned what immediate and long-term heath screening was being put in place to monitor what was locally becoming known as the ‘Grenfell Cough,’ yet the response from officials has always been that the area was safe and that local G.P.s had not reported any increase in symptoms,” said Judy Bolton, a former nurse and local resident.

“Now, in March 2019, we are being told that our health has been put at risk and is likely to be in the future,” she added. “Who is being held responsible and accountable for, yet again, ignoring the entirely valid concerns of local residents? The authorities in question should hang their heads in shame.”

On Thursday, residents were informed that a multiagency government program would carry out further testing and provide health screenings, but local activists said the government’s lack of urgency on the matter was unacceptable.

“For far too long, this community has been repeatedly ignored,” Justice4Grenfell, a community group working for the survivors, said in a statement. “Apologies will not do it now — how many more lives are they willing to put at risk?”