Grace Notes: At Lord & Taylor, Everything Must Go. A Daughter’s Guilt Will Remain. 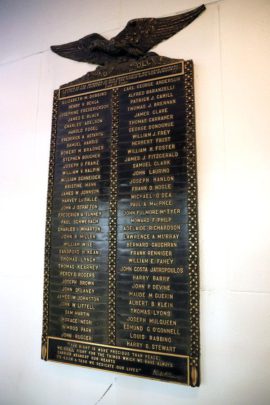 These are the less-than-elegant last days of what, in the days when department stores were destinations, was one of New York City’s most elegant: Lord & Taylor, a fortress on Fifth Avenue.

The everything-must-go signs have been up for weeks. They promise huge markdowns, but there is not much left to pick over. Whole floors have been emptied.

The building opened when Woodrow Wilson was president. It is being sold to the office-sharing start-up WeWork.

But this is not a requiem for the store. It is the story of a mother, a daughter and the daughter’s guilt.

The daughter is Jennifer Robinson. The guilt had to do with two plaques at Lord & Taylor and a promise to her mother that she did not keep.

The plaques are in the lobby. Her mother, Barbara, had an eye for details and noticed the plaques, one on either side of the revolving doors. The plaques honored 68 Lord & Taylor employees, men and women, “who answered the call of our country to make the world safe for democracy.” So says the inscription at the top of each plaque. Scratched into their gold borders is the word “Matthews,” an indication the plaques were the work of a company in Pittsburgh that made honor rolls and World War I monuments.

“She always zoomed in on those plaques,” Ms. Robinson, 54, recalled, adding that she herself was struck that “Lord & Taylor took the time to put their names up there.” 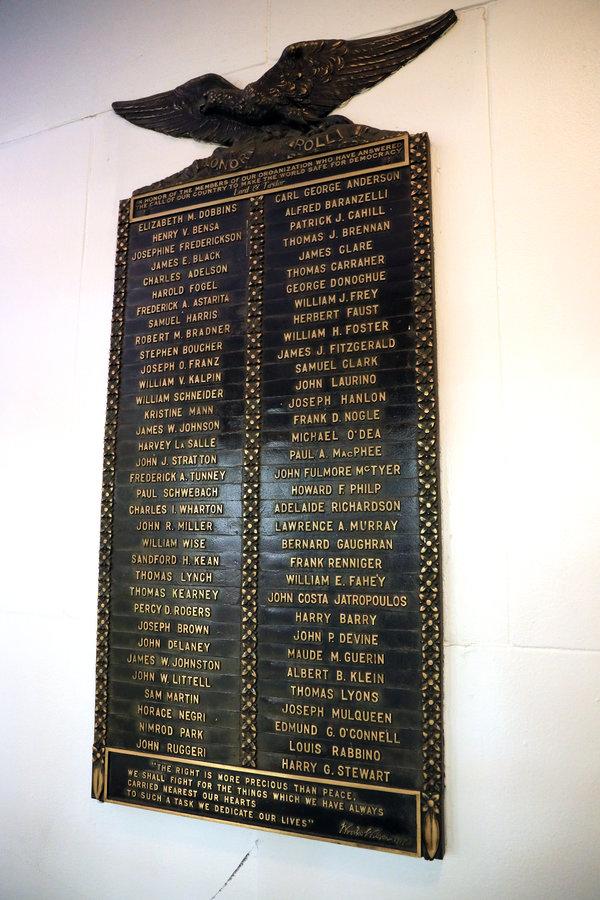 The department store displays plaques in its lobby that bear the names of employees who served in the military.CreditJames Barron/The New York Times

She said her mother, who was a child during World War II, respected those who had served in the military and felt that the plaques deserved more attention. “She was frustrated that there was no light on them on Memorial Day, no recognition, no banner, nothing,” Ms. Robinson said.

So in August 2015, her mother decided to send a letter about the plaques to Hudson’s Bay, the Canadian retailer that had acquired Lord & Taylor in 2012.

“My daughter and I had been shopping for hours, taking advantage of the sales,” she began. “It was Memorial Day, and not even one flower was placed there to honor them. They were completely forgotten. The sale was the thing. It was shameful. I want these honor rolls moved to a prominent location, perhaps near the first floor elevator bank. If there is no wall space — then build one.”

Mrs. Robinson told her daughter to print it and send it.

By then, her mother was frail — she had cancer. Every so often, she would ask about the letter to Hudson’s Bay. “I didn’t have the heart to tell her I didn’t do it,” Ms. Robinson explained. More than once, she simply said she had not received a reply.

If Mrs. Robinson saw through her daughter’s prevaricating, she did not let on.

Just before Christmas, the daughter went through Lord & Taylor for a last look at the plaques. There was also some reminiscing about shopping trips with her mother and about how shopping has changed. Why go to stores these days, anyway?

It did not help that Lord & Taylor had aged, maybe too gracefully. It lacked the trendsetting appeal of, say, Bloomingdale’s in the 1970s and 1980s. Lord & Taylor “was the last of the stores that didn’t have loud music,” Ms. Robinson said. “It wasn’t blaring noise. It wasn’t so hipster.”

Lord & Taylor had long since dropped its everything-under-one-roof strategy, and departments like the cut-flower and plant section and the piano section disappeared. But some throwbacks remained. Ms. Robinson remembered Lord & Taylor’s coat check, and she remembered checking more than a coat.

“I checked my guitar once,” she said, mentioning playing in a band called Killdeer. “It was so nice to dump it and go buy something.”

The holiday display window at Lord & Taylor, whose first store opened on the Lower East Side in Manhattan in the 19th century.CreditJeenah Moon for The New York Times

The coat-check room was way up on the eighth floor, in the same nook as gift wrapping, another department-store tradition. In its earliest days in the 19th century, when it was on the Lower East Side, Lord & Taylor had a rule about how it wrapped customer’s purchases. Anything that cost more than $1 got fancy paper. Items that cost less went home in plain old newspaper.

Lord & Taylor’s own start is worthy of the frilly paper. Its beginnings read “like an episode from a Victorian novel,” John William Ferry wrote in his book “A History of the Department Store.” There was the man before the ampersand — Samuel Lord, the youngest of nine children and orphaned when he was 6, who went on to work in an iron foundry and married the boss’s daughter.

The boss was James Taylor. After Lord emigrated from England in 1825, $1,000 from a Taylor relative financed a store he opened near the Bowery. Soon Lord formed a partnership with yet another of his wife’s relatives, and Lord & Taylor was born.

As the city migrated uptown after the Civil War, Lord & Taylor followed, arriving in 1914 in the store Ms. Robinson knew so well. The light fixtures that hung from the ceiling on the first floor were originally old-fashioned gas lights, according to a sign in the store. “Converted to electric!” the sign said. The fixtures are being sold for $1,000 each.

Lord & Taylor continued some decidedly American traditions after it was acquired by Hudson’s Bay. Even as it conducted its store-closing sale, it played “The Star-Spangled Banner” over the public address system before allowing customers inside, as it has done since the 444-day Iran hostage crisis that began in 1979. The store’s chairman at the time ordered the national anthem played “because, with all its problems, this is still the greatest country in the world.”

But when Ms. Robinson stepped into the elevator and pressed the button for the eighth floor, a passenger, Cynthia Williams, lamented another tradition that would end with the store’s closing: the windows that were decorated for the holidays.

“It’s like it’s over,” Ms. Williams said, “even though there will be the other Lord & Taylors. They’re not the same. This was part of the Christmas experience.” Ms. Robinson nodded.

The other stores in the Lord & Taylor chain are not closing. And Hudson’s Bay, which originally said it would maintain a Lord & Taylor presence in the Fifth Avenue building, has decided not to, a spokeswoman said.

If Ms. Robinson is still feeling guilt about her mother’s unsent letter — her mother died in September 2016, at age 76 — at least there is this. The spokeswoman for Hudson’s Bay, Tiffany Bourré, said the plaques would be preserved and taken care of after the store closes for the last time on Wednesday.