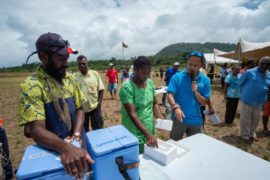 In the village of Cook’s Bay, on the remote side of the remote island of Erromango, in the remote South Pacific nation of Vanuatu, 1-month-old Joy Nowai was given hepatitis and tuberculosis shots delivered by a flying drone on Monday.

It may not have been the first vial of vaccine ever delivered that way, but it was the first in Vanuatu, which is the only country in the world to make its childhood vaccine program officially drone-dependent.

“I am so happy the drone brought the stick medicine to Cook’s Bay as I don’t have to walk several hours to Port Narvin for her vaccines,” her mother, Julie Nowai told a Unicef representative. “It is only 15 minutes walk from my home.”

Even paradise can be tough on vaccinators. Vanuatu is an archipelago of 83 volcanic islands. Many villages are reachable only by “banana boats,” single-engine skiffs that 12-foot waves sometimes roll over or smash into cliffs. Other villages are at the end of mountain footpaths that become bogs when it rains, which it does a lot.

Also, many vaccines need refrigeration, and most villages have no electricity.

For those reasons, about 20 percent of Vanuatu’s 35,000 children under age 5 do not get all their shots, according to the United Nations Children’s Fund.

So the country, with support from Unicef, the Australian government and the Global Fund to Fight AIDS, Tuberculosis and Malaria, began its drone program on Monday. It will initially serve three islands but may be expanded to many more.

In the future, that expansion may run into some unusual turbulence — Vanuatu is one of the few places where “cargo cults” are still active, and the drones match their central religious dogma: that believers will receive valuable goods delivered by airplane.

That will have to be handled carefully, a Unicef representative said.

Unlike military drones — which fly high and sometimes fire missiles — commercial drones must venture in low, dodge trees, land gently and even return with payloads, such as blood samples.

As drones have improved, their potential uses in global health have rapidly increased, and many countries and charitable groups are considering them. 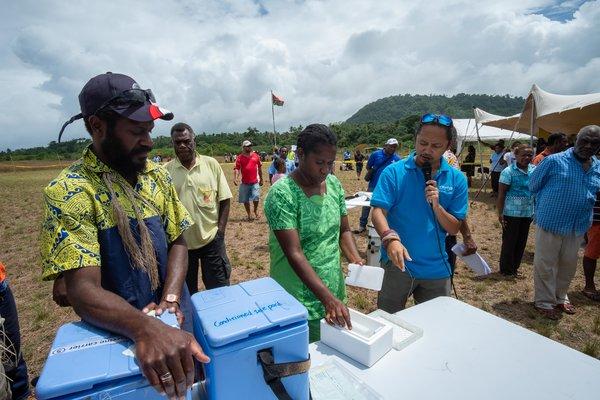 Dr. Ridwan Gustiana, right, with nurses Roslinda Narawayan and Dominic Bule, demonstrated how to pack vaccines for a test flight of one of the drones on Vanuatu.CreditJason Chute/Unicef Pacific

Since 2016, Zipline, a California company, has piloted more than 8,000 flights over Rwanda, delivering blood for transfusions. Its drones are launched by catapult and do not land at their destinations, but fly low over head and drop their payloads by paper parachute.

Zipline has plans to start delivering vaccines in Rwanda within weeks and in Ghana early in 2019.

Emergency drops of rabies vaccine for children bitten by dogs will be the first priority, said Dr. Seth F. Berkley, chief executive officer of Gavi, the Vaccine Alliance, which joined the package delivery company U.P.S. in supporting the Rwandan effort.

Since last year, Unicef has run a “drone test corridor” in the southern African nation of Malawi to test delivery of humanitarian supplies, including vaccines.

But this is the first commercial contract for routine childhood vaccines. Swoop Aero, an Australian start-up, will be paid only for shipments that arrive safely, Unicef said.

Swoop won the contract after proving its drones could fly 30 miles over islands and land within a six-foot target circle. Inside the drones can hold just over five pounds of vaccine, ice packs and a temperature monitor to prove the vials stayed cold in flight.

As the drone arrived on Monday after at 25-minute flight, Cook’s Bay villagers did a welcoming dance around it waving banana leaves.

Its population is small and widely spread out, the government is enthusiastic, and there are “no issues with crowded skies,” as in bigger island countries like Indonesia, he said.

But “we don’t want to over-promise,” he added. “We want to start slowly.”

Miriam Nampil, the 55-year-old nurse who gave the shots, lives in Port Narvin, a coastal town whose clinic has a solar-powered refrigerator.

“This drone will change my life,” she said through a translator. “Normally, I must trek about two hours over the mountain each way, and the vaccine carriers are heavy.”

Round trip by boat is about $70 — too much for the health ministry budget, she said, and only safe on calm days.

With its eight-foot wingspan, the white Swoop drone resembles a robot albatross. But it lacks that bird’s calm, ghostly floating flight pattern.

Instead, it shrieks with the enraged buzz of a disturbed hornets’ nest as it shoots straight up in the air and zooms off forward at up to 60 miles an hour.

It can maintain 500 feet of altitude in the hot tropical climate and can handle rain and 30-mile-an-hour gusts, said Eric Peck, a former Australian Air Force pilot who founded Swoop with Josh Tepper, a drone racer and robotics expert.

The drone will soon be doing 80-mile round trips, Mr. Peck said, and because it communicates with the Iridium satellite network, it can be piloted from anywhere in the world and will fly even if local cell networks go down, which happens frequently.

Dr. Gustiana showed the Swoop Aero drone’s return-to-base button, which sends the drone back to where it originated.CreditJason Chute/Unicef Pacific

Eventually, he said, Swoop will train local pilots and help the health ministry build its own drones by attaching mail-order engines to carbon-fiber wings that can be produced on a 3-D printer.

“We need to make sure people aren’t spooked by a buzzing thing in the sky descending on them,” Mr. Yett said. “We want to make sure some kid with a catapult doesn’t shoot it down.”

Swoop’s drones are fairly hardy, Mr. Peck said. In Australia, aggressive wedge-tailed eagles have knocked large mapping drones out of the sky, but Vanuatu has no birds of prey that big.

Another issue that will require gentle handling: Vanuatu still has adherents of the John Frum movement, one of the South Pacific cargo cults whose adherents pray for valuables arriving from the sky.

The cults date back more than 100 years, but reached their zenith during and after World War II.

Islanders whose ancestors had been kidnapped by whites to work on plantations in Australia and Fiji watched “silver birds” flown in by the Japanese and American militaries disgorge vast amounts of “cargo” — food, medicines, tools and weapons — which was sometimes shared with them.

The legend spread that the cargo was gifts from the ancestors, but that it had been intercepted and stolen by the foreigners. After the war ended, the cults built airstrips and model planes to lure the “birds” back.

John Frum, a messianic figure, is sometimes portrayed as a black American sailor or sergeant (“John from America”) whose symbol is a red cross like that on military medical tents and whose return will trigger an apocalypse, deliver vast piles of cargo, and make whites and Melanesians change places in the power hierarchy.

On Vanuatu’s Tanna Island, the Frum movement was so powerful that it spawned a political party. During the 1970s independence movement, it opposed the creation of a national government and espoused a return to traditional Melanesian customs.

The health ministry plans to eventually fly drones on Tanna, which may provoke unpredictable responses.

But the right people to do that “are local leaders, not Americans with fancy degrees,” he said. “Our goal isn’t to put our thumb on the scale of local belief systems; it’s to make sure kids are immunized.”