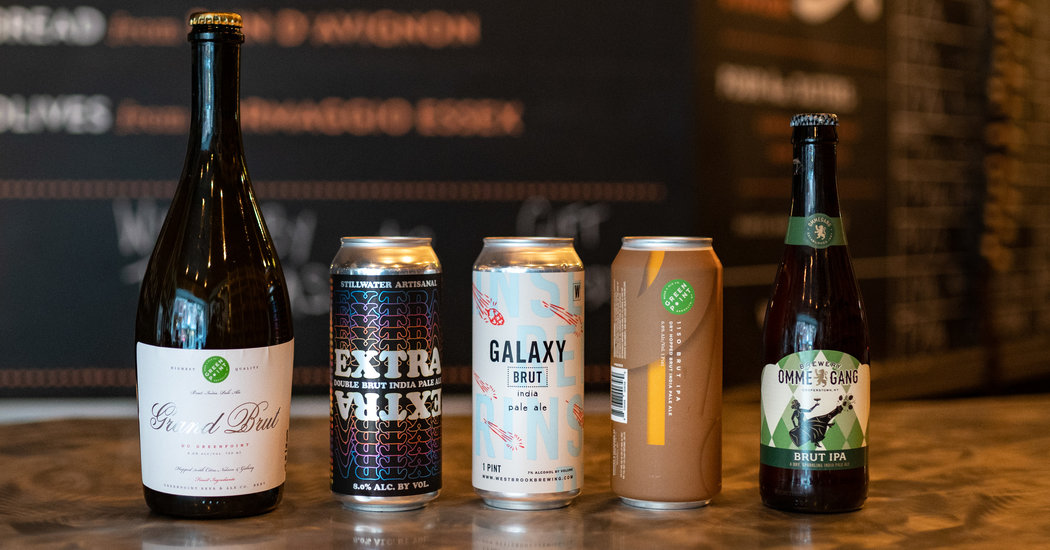 It’s taken a little over a year for Brut I.P.A., a new style of India Pale Ale, to sweep through the craft-brewing community. The name is a reference to brut, a dry Champagne. By all accounts, it was created by Kim Sturdavant, the brewmaster of Social Kitchen and Brewery in San Francisco, who used amyloglucosidase, or AMG, to remove the sugars in an I.P.A. AMG is an enzyme usually added to make light beers and to balance big beers like imperial stouts. Some New York brewers — including Sixpoint, Five Boroughs, Greenpoint, and Ommegang in central New York — are now making Brut I.P.A.s. Sam Adams introduced its Brut I.P.A. in June, and it also makes a rosé Brut I.P.A. There are now hundreds of them being made nationwide. Stylistically, there are variations in flavor, color and texture, but most are crisp, light and somewhat citric. A glass of the bubbly, golden Brut I.P.A. would not be out of place for a toast at the ball drop. “They’re the opposite of juicy, sweet New England I.P.A.s,” said Kevin Brooks, the manager of the Lower East Side beer store Top Hops, which carries several Brut I.P.A.s. “With national brands like Ommegang, you’ll see them everywhere; it’s a new all-American style,” said Chris Chou-Messina, who is the director of craft innovation at Anheuser-Busch. Ms. Chou-Messina will lead a class in Brut I.P.A. at Top Hops on March 12.