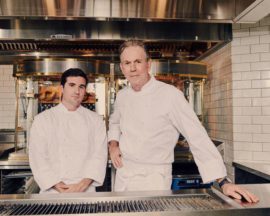 On March 15, a new dining hub will open on the western edge of Midtown Manhattan in Hudson Yards, from 10th to 12th Avenues and 30th to 34th Streets. Many of the restaurants involve familiar names like Thomas Keller, David Chang, Michael Lomonaco, Costas Spiliadis and José Andrés, among others, with some restaurant imports from England and California.

The developers, Related Companies and Oxford Properties Group, are counting on the restaurants to give the former rail yards — now bristling with shiny towers like some futuristic San Gimignano — a sense of neighborhood geniality to appeal to those who visit, live and work in the new complex. Most of the dining options are clustered in a central one-million-square-foot, seven-story building, the Shops & Restaurants at Hudson Yards. A huge, vibrant Spanish food hall, coyly named Mercado Little Spain, is the most dynamic addition to the area and even to the city itself.

Scattered throughout are familiar casual spots like Sweetgreen, Maison Kayser and Shake Shack. The Neiman Marcus store will have several dining areas.

At the Shops & Restaurants at Hudson Yards, the most prestigious restaurants are on the higher floors. “When you go down to four, three and two, you get more democratic brands,” said Kenneth A. Himmel, the president and chief executive of Related Urban, a division of Related Companies, which also developed the Time Warner Center at Columbus Circle. The success of the restaurants there “convinced chefs and restaurateurs that they could thrive in a vertical setting.” There are no major dining areas on the ground floor of the Hudson Yards centerpiece, where only luxury brands like Cartier can afford the rents. “Expense is a hurdle,” Mr. Himmel said. He is hoping to find an Italian restaurant for a vacant space on the fifth floor.

The towers at 30, 35, 50 and 55 Hudson Yards will also have restaurants. An area called the Western Yard, from 11th to 12th Avenues, is still in development, but is expected to have several restaurants, mostly casual. 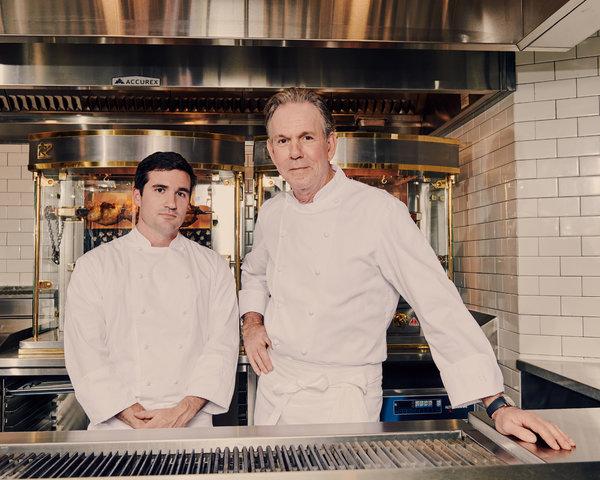 Jarrod Huth, left, and Thomas Keller, in the kitchen of TAK Room.CreditVincent Tullo for The New York Times

The chef and restaurateur Thomas Keller is “taking a page out of history” for TAK Room, which represents a return to “continental” dining, the fancy style of the 1940s and ’50s, featuring European-style dress-to-impress food like lobster thermidor, beef Wellington, green beans amandine and Dover sole filleted tableside. It opens after a successful tryout for the idea at the new Surf Club Restaurant by Thomas Keller in Miami. Jarrod Huth, TAK Room’s 34-year-old chef de cuisine, will be in charge of the kitchen in New York. The restaurant seats 180 in a plush setting, divided into several dining areas with leaded windows, greenery and touches that evoke the Art Deco era. “More intimate spaces are better for the guests and for service,” Mr. Keller said. A glass-enclosed conservatory room, an outdoor terrace and a lounge are some other elements. “My goal is to find a Bobby Short to entertain,” Mr. Keller said. On the fifth floor, at the entrance to the restaurant, there’s a sweeping staircase to the dining areas and an intimate bar with a couple of rooms, forest-green faux alligator upholstery and a working fireplace. It was all designed by Simon Rawlings of David Collins Studio in London, which has done work at Harrods. A small Bouchon Bakery will also open on the fifth floor of the building: takroomnyc.com.

Sweeping views are part of the new Milos restaurant.CreditVincent Tullo for The New York Times

This is a branch of Costas Spiliadis’s uptown and international Greek seafood restaurant. The curved 230-seat dining room, with splendid views of the Hudson River and the Vessel, the complex’s central sculptural signature, will offer a typical Milos menu, though there are several distinctive new features, including an outdoor terrace, a big open kitchen and a glass-enclosed room where all the fish will be handled. To one side is a wine bar, with a raw bar in the middle. Milos Wine Bar, on the fifth floor, has a focus on Greek wines, and includes a yogurt bar and a retail counter selling Greek products and serving meze: estiatoriomilos.com.

The chef Eunjo “Jo” Park runs the kitchen at Kawi, the latest Momofuku restaurant from David Chang.CreditVincent Tullo for The New York Times

David Chang’s windowless restaurant features a bustling double dining room seating 130, half with a bar and half with an open kitchen, a chef’s counter and several booths. The menu has a Korean influence, notable for dishes involving chewy rice cakes, dduk, which will be made in house. The chef is Eunjo “Jo” Park, who grew up outside Seoul and worked in South Korean restaurants and at Mr. Chang’s Ko, as well as at Daniel and Per Se. The menu will also include raw dishes like hwedupbap with fish and vegetables over rice, along with soups and stews. Adjacent to it is Peach Mart for sandwiches, snacks and kimbap (sushi roll slices) to take away, with seats just outside in the mall: kawi.momofuku.com.

The menu at Wild Ink is “East meets West.”CreditVincent Tullo for The New York Times

This newcomer from London was considering opening in New York when Hudson Yards developers came knocking. The company, rhubarb Hospitality Group, has nine locations in London, and here, it is opening an interpretive 175-seat East-meets-West restaurant, with items like pork-and-Wagyu sliders, crab mac-and-cheese won tons, duck à la kumquat and miso custard tart. A grid of bamboo covers the ceiling, an open kitchen has counter seats and the dining room offers stunning views. A spacious bar sits behind the kitchen area. The culinary director, Tien Ho, is notable for his stint at Má Pêche and Momofuku Ssam Bar. Peter Jin, the executive chef, has been working in Hong Kong for the past eight years. The notion of Wild Ink is a “chef’s travel journal.” International street food will be served at the bar. The company will also run the restaurant and event space at the observation deck on the top of 30 Hudson Yards, adjacent to the Shops & Restaurants building: wildinknyc.com.

Michael Lomonaco’s new American brasserie is more casual than his steakhouse in the Time Warner Center.CreditVincent Tullo for The New York Times

Michael Lomonaco and Christopher Himmel are opening a steakhouse and then some, more varied and casual than Mr. Lomonaco’s Porter House Bar and Grill in the Time Warner Center at Columbus Circle. Like most of the other restaurants in the Hudson Yards building, it has an open kitchen in a design by Bentel & Bentel, with leather booths that break up the 275-seat space into more intimate areas. There’s a stretch of marble bar. The chef de cuisine, Brian Mottola, will execute food that Mr. Lomonaco described as “American brasserie,” with burgers, salads, steaks, rotisserie meats, pizza and sushi. Colorful abstract art adorns the walls, highlighted by a piece by Sol LeWitt near the entrance: hudsonyardsgrill.com.

Queensyard features paintings of the Thames by the American artist Sarah Moore.CreditVincent Tullo for The New York Times

D&D London, which opened Bluebird London in the Time Warner Center last fall, has created a comfortably furnished 110-seat main room that stretches along the windows, with colorful murals of the Thames painted by the American artist Sarah Moore. Owen Sullivan, the executive chef, worked for Gordon Ramsay, and will bring in various English elements like Cumberland sausage for two, beef and marrow pie, Scotch egg and peppercorn beef fillet. A martini cart will patrol the dining room, part of an elaborate gin service. The Kitchen, another dining area, has communal seating, and a 50-seat bar and lounge is on a mezzanine. A separate grab-and-go cafe next door becomes a wine bar in the evening: queensyardnyc.com.

Anya Fernald, a founder of Belcampo.CreditVincent Tullo for The New York Times

This California company raises its own meat on a ranch in the Shasta Valley and runs farm-to-table restaurants and butcher shops on the West Coast. It will open a fast-casual branch serving rustic fare, including burgers, sausages and salad bowls topped with meat. A small dining area in the rear of the black-and-white tile space is where Anya Fernald, an owner, plans to serve specialties like duck confit poutine and beef tartare: belcampo.com/restaurant/nyc-hudson-yards.

Joe Gurrera, the owner of Citarella, at a fish counter in the new Hudson Yards Citarella.CreditVincent Tullo for The New York Times

Though a Whole Foods supermarket is opening in the Brookfield Properties development across 10th Avenue from Hudson Yards, this Citarella store is, as of now, the only fresh food market in Hudson Yards. It will have a number of features unique to this location: a raw bar with a dining counter, pizzas and panini made to order, and whole fish that can be purchased and then grilled to take home. A wine and liquor store is going in next to the market: citarella.com.

A rendering of the Zodiac Room.CreditNeiman Marcus

The Zodiac Room, on the seventh floor, is the department store’s fine-dining restaurant, an elegant, well-upholstered room with a bar, and serving some specialties like popovers with strawberry butter, and chopped salad. Bar Stanley, on the sixth floor, will serve sandwiches, burgers and bar snacks in addition to cocktails. Cook & Merchants on the fifth floor will sell fresh and packaged food to go and culinary gifts, and will offer cooking classes: neimanmarcus.com/Restaurants.

José Andrés brings this sprawling 35,000-square-foot taste of Spain to New York, with the help of Ferran and Albert Adrià. Don’t think of it as a Spanish Eataly or Le District because it’s mostly about eating, not shopping. In addition to Spanish Diner, with egg dishes and sandwiches all day, there is a sit-down seafood restaurant, Mar, and Leña, a third restaurant, specializing in paella and grilled meats. The colorfully tiled space will inspire grazing, with 15 food stations, which are opening gradually, starting with churros, patatas bravas, the Bar Celona cocktail bar and Colmado, a retail shop for imports like paella pans. In coming weeks, look for kiosks offering cured hams, empanadas, salads and gazpacho, among others. “I always wanted to come to New York to open something,” Mr. Andrés said. “I worked here briefly as a cook in 1991. Now, with this, I’m giving myself a gift.”: littlespain.com.

Cedric’s at the Shed

A casual all-day menu will be served at this spacious restaurant opening in April from Union Square Hospitality Group in the Shed, an arts and culture center in an innovative structure on the 30th Street side of Hudson Yards. 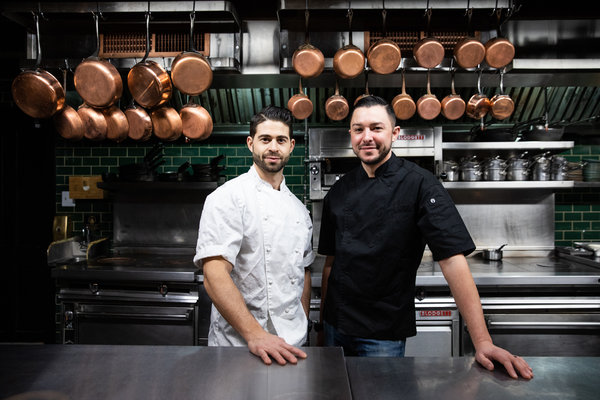 FacebookshareGoogle+sharePinterestpin it
An H.I.V. Cure: Answers to 4 Key QuestionsMedical News Today: Are black walnuts good for you?
Latest