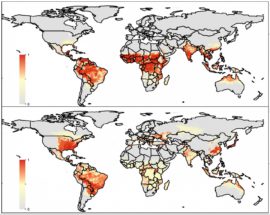 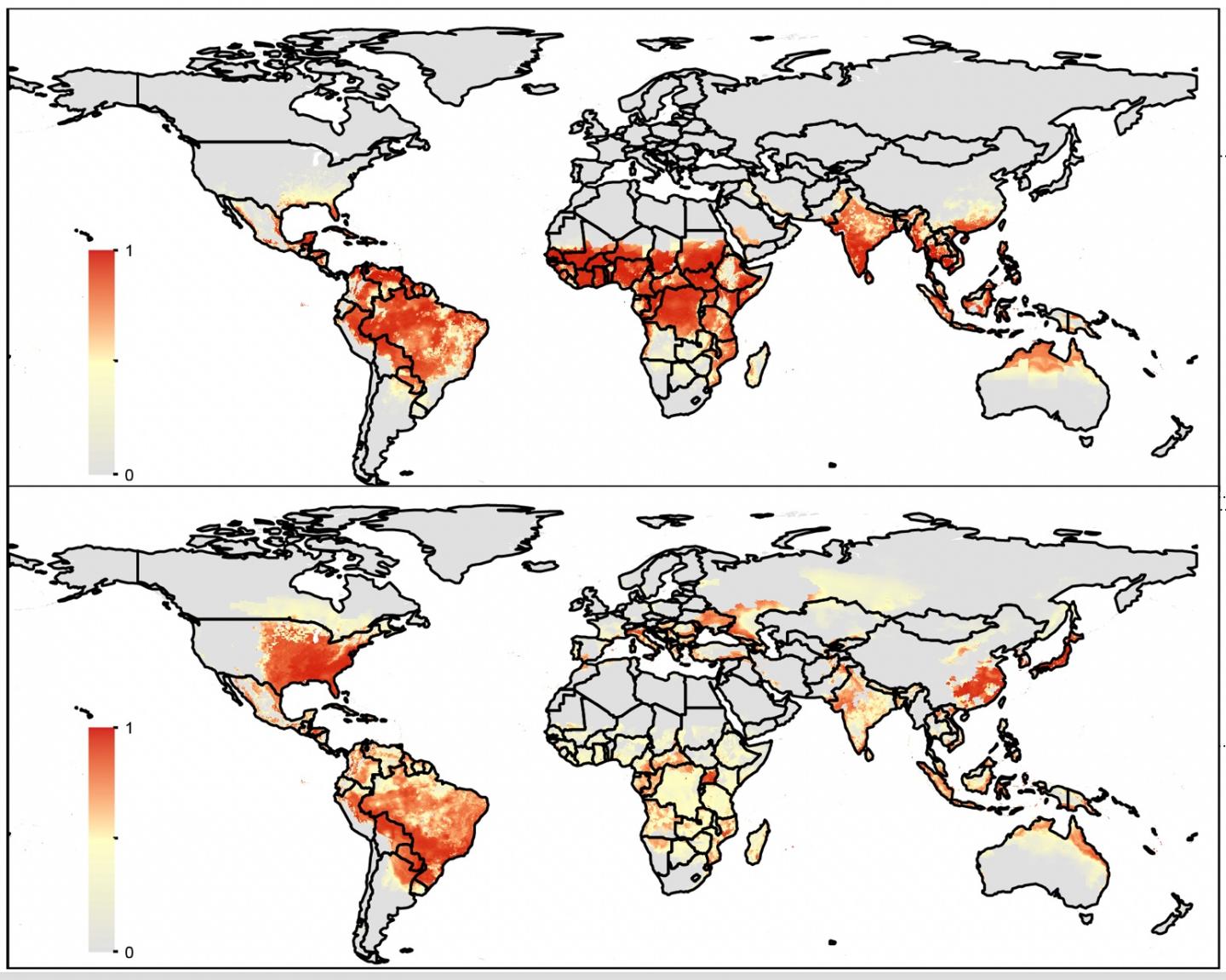 IMAGE: These maps show the predicted global ranges of Aedes aegypti (above) and Aedes albopictus (below) in 2050 assuming a ‘medium’ climate scenario in which greenhouse gas emissions peak in 2080… view more

Outbreaks of mosquito-borne illnesses like yellow fever, dengue, Zika and chikungunya are rising around the world. Climate change has created conditions favorable to mosquitoes’ spread, but so have human travel and migration and accelerating urbanization, creating new mini-habitats for mosquitoes.

In today’s Nature Microbiology, a large group of international collaborators combined these factors into prediction models that offer insight into the recent spread of two key disease-spreading mosquitoes — Aedes aegypti and Aedes albopictus. The models forecast that by 2050, 49 percent of the world’s population will live in places where these species are established if greenhouse gas emissions continue at current rates.

«We find evidence that if no action is taken to reduce the current rate at which the climate is warming, pockets of habitat will open up across many urban areas with vast amounts of individuals susceptible to infection,» says Moritz Kraemer, PhD, of Boston Children’s Hospital and the University of Oxford (UK). Kraemer was co-first author on the study with Robert Reiner of the University of Washington (Seattle), Oliver Brady of the London School of Hygiene and Tropical Medicine, Jane Messina of the University of Oxford and Marius Gilbert of the Universite Libre de Bruxelles (Belgium).

The team gathered historic data on the distributions of Aedes aegypti and Aedes albopictus over time in more than 3,000 locations in Europe and the U.S., going back as far as the 1970s and 1980s. They also mapped the locations based on their present-day suitability as mosquito habitats, then projected their suitability in 2020, 2050 and 2080 based on various climate models, projections of urban growth and other variables. They also included human migration and travel patterns, using data from census data and mobile phone records.

«We observed striking differences in the spread of both mosquito species, which has direct implications for surveillance and control strategies,» says Kraemer. «We hope that these high-resolution maps will be used to target specific geographic areas for surveillance, control and elimination of these harmful mosquito populations.»

What’s next for mosquitos?

The models suggest that under current climate conditions and population densities, both mosquito species will continue to spread globally over the coming decades.

Aedes aegypti is predicted to spread mostly within its current tropical range, but also in new temperate areas in the U.S. and China, reaching as far north as Chicago and Shanghai, respectively, by 2050. In the U.S., this spread is expected to occur in large urban areas, through long-distance introductions of the insect. Aedes aegypti is expected to decline in the central southern United States and Eastern Europe, which climate models predict will become more arid. It’s not expected to reach Europe except for parts of southern Italy and Turkey.

Aedes albopictus, however, is forecast to spread widely throughout Europe, ultimately reaching large areas of France and Germany over the next 30 years. It’s also expected to establish a toe-hold in parts of the northern U.S. and the highland regions of South America and East Africa.

In the next 5 to 15 years, the models predict that spread of both species will be driven by human movement, rather than environmental changes. But thereafter, expansion will be driven by changes in climate, temperature and urbanization that create new mosquito habitats. And if climate change isn’t curbed by 2050, the spread is predicted to be even greater.

«With this new work, we can start to anticipate how the transmission of diseases like dengue and Zika might be influenced by a variety of environmental changes,» says Simon I. Hay, director of Geospatial Science at IHME and Professor of Health Metrics Sciences at the University of Washington. «Incorporating this information into future scenarios of risk can help policymakers predict health impacts and help guide strategies to limit the spread of these mosquito species, an essential step to reduce the disease burden.»

Hay and Nick Golding of the University of Melbourne were co-senior investigators on the study. See the paper for a full list of authors and funders.

FacebookshareGoogle+sharePinterestpin it
Personal Health: Want to Leave a Legacy? Be a MentorBigger, Saltier, Heavier: Fast Food Since 1986 in 3 Simple Charts
Latest