Field Notes: Why Go to the Chapel or City Hall When You Can Say ‘I Do’ Like Aquaman? 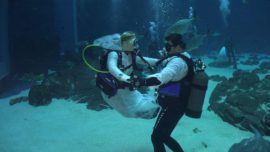 Justin and Crystal Reynolds shared their first dance as husband and wife almost three years ago surrounded by friends, family, manta rays and whale sharks. They married submerged in 6.3 million gallons of water inside the Ocean Voyager exhibit at the Georgia Aquarium in Atlanta.

“We definitely wanted to mix our wedding with diving because it was something we were so passionate about,” said Ms. Reynolds, 33, who lives in Weston, Fla., and is studying criminal justice and forensic psychology at Purdue University Global.

In preparation, the bridesmaid, groomsman and officiant achieved scuba certification. “Everyone had to wear a dive suit, and then, over the dive suit, we wore our wedding attire,” said Ms. Reynolds, who chose a lace gown. “My dress and my veil were weighted to keep them from flowing in the water.”

Mr. Reynolds, 33, the director of facilities at the Philip and Patricia Frost Museum of Science in Miami, his groomsman and the officiant sported tuxedo shirts, cummerbunds and bow ties. 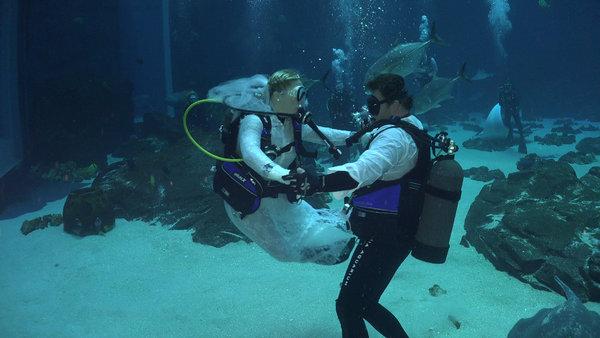 In preparation, the bridesmaid, groomsman and officiant achieved scuba certification. “Everyone had to wear a dive suit, and then, over the dive suit, we wore our wedding attire,” said Ms. Reynolds, who chose a lace gown, which was weighted.CreditGeorgia Aquarium

On Feb. 21, 2016, the ceremony was live-streamed to the couple’s church, Apostolic Life Tabernacle in Crestview, Fla., contributing to 300 total viewers, including 100 in-person invitees and additional Sunday morning aquarium visitors observing from beyond the habitat’s tank. “We could see them through the glass,” Ms. Reynolds said. “They had a section in the front blocked off for all of our family and friends, so everyone who we knew was closest to us.”

Following the aquatic ceremony, cost upward of $15,000, lasted 40 minutes and included catered appetizers by Wolfgang Puck, the newlyweds changed clothes and celebrated with a private reception in the Georgia Aquarium’s Oceans Ballroom.

Fittingly, the two met through PlentyOfFish, an online dating service, and Ms. Reynold’s engagement ring was a gold pearl atop a diamond band. The underwater union was the first for the aquarium. However, the destination hosts weddings and events in other spaces on site.

Many more places not readily associated with weddings are opening their doors to couples looking to embrace the unconventional. These brides and grooms are seeking out spaces where they feel a personal connection — regardless of the manpower involved or random passer-by guests in attendance.

“There are people who want to do something totally different and unique,” said Jen Campbell, the founder and creative director of Green Wedding Shoes, a website that profiles weddings from all over the world. “People are getting married older. They’ve already been to a lot of weddings. They want to do something different, so it feels special and unique to them.”

Voodoo Doughnut has held celebrations for more than 1,000 couples in their various shops. Megan Davis and Teresa Fredericks were married May 19, 2016, by Ethan Colyer, a Universal Life minister and general manager of the Portland store, Voodoo Too.CreditBryan Rupp Photography

The Green Wedding Shoes archive shares a range of matrimonial celebrations, including ceremonies and parties in airport hangars, a bowling alley, a railroad museum, castles and outdoor spaces such as national parks with waterfalls.

“They look for something that isn’t your typical wedding venue,” said Ms. Campbell, who lives in Los Angeles. “Then they know they’ve been the only ones to get married there.”

Price points will vary greatly, even in nature settings that may be otherwise free to visitors. “It could be more expensive because you have to rent chairs and figure out logistics of everything,” Ms. Campbell noted. “Some people save money on that kind of stuff, too.”

If you’re on a super-tight budget and happen to like doughnuts — a lot — you’re in luck. You can marry or renew your vows for $1,000 or less at Voodoo Doughnut. (There are stores in Portland and Eugene, Ore.; Denver; Austin, Tex.; Orlando, Fla.; and Hollywood, Calif.) The shops’ wedding packages offer Voodoo doll bride and groom custom doughnuts, a doughnut heart centerpiece and coffee for as many as 60 guests.

Without doughnuts or coffee — to rent the space and utilize a Voodoo Doughnut celebrant — a ceremony with nine guests or fewer is an easy $100 (sales tax not included). A legal wedding ceremony, with officiant, at the shops are a tad more. For $350, included are custom doughnuts, menu-featured doughnuts and coffee for up to 24 guests at most locations. (At the downtown Portland location, you’ll have to limit your party to nine.)

Sara Terrill and Tiffany Ford were married Oct. 27, 2016 at Voodoo Too doughnut shop in Portland. The company offers weddings with or without doughnuts.CreditSara Heise

Voodoo Doughnut’s first on-site wedding ceremony was in 2003 in Portland, and since then, more than 1,000 couples have been married at the company’s stores. Holidays like Valentine’s Day, April Fools’ Day and Halloween are especially popular.

“We did our first wedding at Voodoo within a couple weeks of opening,” said Kenneth Pogson, a founder of Voodoo Doughnut. The couple married in a tuxedo and white dress, as well as skull and zombie makeup.

Mr. Pogson and Tres Shannon, another Voodoo Doughnut founder, are ordained ministers through the Universal Life Church. All weddings at their stores are performed by employee officiants (there are a few ordained managers at each location).

Ceremonies at the doughnut shops typically take three to five minutes. “Afterward, we’re open for business,” Mr. Shannon said. “Sometimes we’ll make it private and shut the door, but usually there are perfect strangers still in the lobby or in the line.”

Beyond fried dough festivities, couples throughout the country have devoted themselves to one another, for better or for worse, at amusement parks, Taco Bell, and Costco Wholesale and Whole Foods Market stores, in part because they feel strong ties to these brands and businesses.

Voodoo Doughnut has wedding packages for $350, including a legal officiant custom doughnuts, menu-featured doughnuts and coffee for up to 24 guests (at most locations).CreditSara Helse

At Taco Bell’s flagship Cantina restaurant in Las Vegas, “marriage is on the menu,” according to store’s wedding website. Fans of the fast-food chain — maybe those with fond date-night memories — can mark their unions in the presence of 25 guests (or fewer).

Within the restaurant’s chapel — yes, it has a chapel — each celebration involves a 30-minute ceremony with an officiant provided and a sauce packet bouquet for the bride to hold while walking down the aisle. A reception is held within the restaurant and various swag provided, including “Just Married” T-shirts, champagne flutes and a “Taco 12 Pack.”

The event spaces synonymous with bowling, Lucky Strike Entertainment, located in 20 cities nationwide including New York, Boston, Chicago and Honolulu, also offer wedding reception packages. Each year, between 15 and 20 couples tie the knot among 20 to 120 friends and family members, pins, rental shoes and gutter balls. The price ranges from $80 to $100, per person. The average Lucky Strike Entertainment reception has 50 guests — but so far no couple has actually been married in the space.

One couple married at Voodoo Doughnut store 10 years ago is “coming back in a couple of weeks to do a recommitment ceremony,” Mr. Pogson said. “It’s nice to know that there are people out there who wanted a silly, little, fun, easy wedding, and that they’re having a happy life.”

“The ceremony doesn’t really mean anything,” Mr. Pogson said. “It’s the commitment the two people have that’s going to decide whether their love will last for all eternity.”

Even if it started under water.

“We didn’t even think it was possible,” Ms. Reynolds said of her underwater, aquarium wedding. “We lived in Georgia at the time, and we just kind of reached out to them on a prayer just thinking, ‘Hey, you know, what could happen? The worst they could say is ‘no’.”

FacebookshareGoogle+sharePinterestpin it
What to Cook: Yule Log!What is the secret to women’s longevity?
Latest