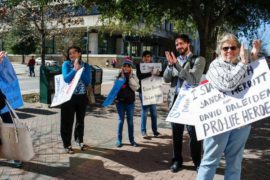 Should the government pay for medical research that uses tissue from aborted fetuses? This debate, ever smoldering, has erupted again, pitting anti-abortion forces in the Trump administration against scientists who say the tissue is essential for studies that benefit millions of patients.

In a letter last week that read like a shot across the bow, the National Institutes of Health warned the University California, San Francisco, that its $2 million contract for research involving the tissue, previously renewed for a year at a time, would be extended for only 90 days and might then be canceled.

University scientists had been using fetal tissue to create so-called humanized mice, which can then be used to test drugs and vaccines. The university has played a key role in testing antiviral drugs to treat H.I.V. infection. And researchers say that the mice, which essentially have a complete human immune system, are indispensable.

Scientists who do this work sometimes receive threats, so U.C.S.F. has asked that its researchers not be named for security reasons. The events there were first reported by the Washington Post.

The notice to the university was part of a larger push by the Department of Health and Human Services — which oversees the National Institutes of Health and the Food and Drug Administration — to limit use of the tissue.

H.H.S. issued a statement in September saying it would conduct a “comprehensive review of all research involving fetal tissue to ensure consistency with statutes and regulations.” The statement cited “serious regulatory, moral, and ethical considerations” and said the department “is continuing to review whether adequate alternatives exist to the use of human fetal tissue in H.H.S. funded research and will ensure that efforts to develop such alternatives are funded and accelerated.”

The department has also ordered researchers at both the F.D.A. and N.I.H. to stop purchasing fetal tissue, and has begun reviewing government grants and contracts awarded to outside researchers who use the tissue. On Monday, the N.I.H. said it would spend $20 million over the next two years to fund research seeking alternatives to fetal tissue.

The ban on fetal tissue purchases at the N.I.H., first reported by Science Insider, has already hobbled experiments on H.I.V.

U.C.S.F. was the first outside research center affected. The work there came under scrutiny because its contract was up for renewal. That contract is now being reviewed, and no decision has been made about whether to continue it, according to Caitlin Oakley, a spokeswoman for H.H.S. She described the department as “pro-life, pro-science.”

Ms. Oakley declined to say whether similar letters would be sent to other researchers who have government grants or contracts, but she wrote in an email, “Again, the review is ongoing and when we have more to announce on the progress of the review, we will.”

She also said that the department has met with scientists, anti-abortion groups, ethicists, doctors, researchers and patient groups, among others.

Opponents of the research consider it immoral, a desecration of human body parts and an ugly byproduct of abortion.

Emails between the department and the N.I.H., obtained by The New York Times, indicate that Adm. Brett P. Giroir, the assistant secretary for health at H.H.S., was deeply involved in the push to limit the research. Adm. Giroir, who was appointed by President Trump and confirmed in February 2018, is a physician and researcher who has worked in government, academia and industry.

The N.I.H. spends about $100 million a year of its $37 billion budget on projects that involve fetal tissue. The tissue is used to test drugs, develop vaccines and study cancer, AIDS, Parkinson’s disease, birth defects, blindness and other disorders. For much of that work, scientists say there is no substitute for fetal tissue. 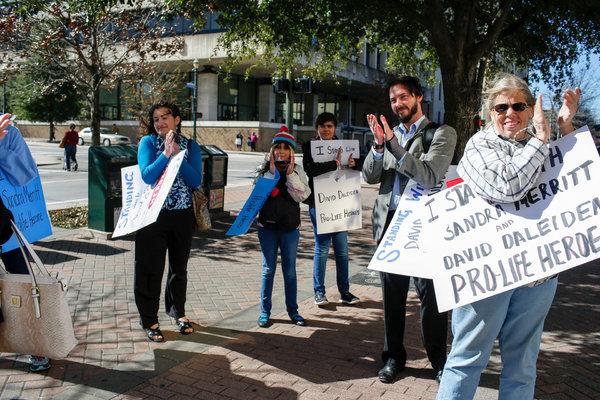 Abortion opponents outside a courthouse in 2016 in Houston, Tex., applauded Sandra Merritt, a producer of a video that surreptitiously recorded an abortion doctor discussing the sale of fetal tissue.CreditEric Kayne/Getty Images

Carrie Wolinetz, associate director for science policy at the N.I.H., said that because H.I.V. can infect only human immune cells, humanized mice are essential for studying the virus and testing drugs to combat it. Currently, only fetal tissue has all the components — cells from the thymus gland, bone marrow and liver — needed to create a human immune system in mice.

Researchers inject the cells into certain strains of mice and then wait for them to “engraft” — be accepted by the animal’s body — and start functioning, much like a transplant.

“Right now we don’t have a good alternative, but in the coming years we might be able to create humanized mice without fetal tissue,” Dr. Wolinetz said. “N.I.H. is very involved in the whole issue of finding alternatives.”

Alternative approaches will probably involve genetically altering certain types of adult cells in hopes of reprogramming them to produce the tissue needed for research, she said.

The last notable challenge to experiments involving fetal tissue occurred in 2015 when an anti-abortion group, the Center for Medical Progress, released disturbing videos its members had secretly made while posing as employees of Advanced Bioscience Resources, a California company that processes fetal tissue, and discussing its purchase with a doctor from a Planned Parenthood clinic that performed abortions.

The videos led to congressional investigations into fetal tissue research and also to invasion of privacy charges in California against the people who made the video. The case has not been tried yet.

Anti-abortion groups stepped up their efforts in June after the F.D.A. posted a notice describing its $16,000 contract to purchase fetal tissue from Advanced Bioscience Resources. The F.D.A. planned to use the tissue to create humanized mice, as it had done in the past.

A conservative online news site, CNS News, sent the F.D.A. 20 questions and posted them online, among them a query about “the total number of donor babies who are expected to donate their tissue to the F.D.A.” The site also asked whether women were being informed “that tissue taken from their aborted baby will be transplanted into a mouse.”

The F.D.A. replied in July with a statement saying the tissue was obtained legally and ethically, used in a small fraction of its total research and “has been used in situations where it is critical to understanding how the human immune system responds to certain drugs and biologics.”

But in September, a coalition of anti-abortion groups wrote to H.H.S. Secretary Alex Azar to denounce the contract, saying, “It is completely unacceptable to discover that the F.D.A. is using federal tax dollars and fomenting demand for human body parts taken from babies who are aborted.”

Around the same time, 85 Republican members of Congress wrote a letter to Dr. Scott Gottlieb, head of the F.D.A., stating: “Unborn children are not commodities to be bought and sold. The practice of conducting research using the body parts of children whose lives have been violently ended by abortion is abhorrent.”

On the other side, 64 academic and medical organizations weighed in with a letter to leaders of the House and Senate defending the research. That group included Harvard, Yale, Brown, Stanford, Johns Hopkins and other major universities, as well as the American Academy of Pediatrics and the American Association for the Advancement of Science.

“Fetal tissue research has been critical for scientific and medical advances that have saved the lives of millions of people, including the development of vaccines against polio, rubella, measles, chickenpox, adenovirus, rabies, and treatments for debilitating diseases such as rheumatoid arthritis, cystic fibrosis, and hemophilia,” the group said in its letter.

The letter added that the tissue had also been crucial in developing treatments for H.I.V. infection and for studying how the Zika virus causes brain damage in developing fetuses. And, the letter said, “cells in fetal tissue have unique and valuable properties that often cannot be replaced by other cell types.”

Miscarriages are not a suitable source of the tissue, the letter said, because some involve genetic abnormalities that would interfere with research, and because miscarriages occur in circumstances that would make it hard to collect the tissue.

On Sept. 24, the H.H.S. announced that the contract had been canceled, and that its broad review of the research would begin.