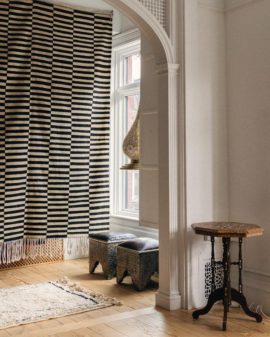 Not long ago, interiors were expected to be chill. But as more decorators lay on color and pattern with the giddiness of paintball enthusiasts, they are borrowing from places where lush, layered and crazy combinations are standard operating aesthetics. Places like Morocco.

What is Moroccan style, exactly? According to Stephanie Rudloe, the owner of Marrakech Designs in Boston, it is a mix of nomadic Berber, Arab-Islamic and European influences that slightly changes character as you venture across the region.

Such objects age well. Martyn Lawrence Bullard, a Los Angeles interior designer, has created fabric, wallpaper and rugs with Moroccan motifs, and infused bits of Moroccan style into the Hotel Californian in Santa Barbara and the Sands Hotel & Spa in Indian Wells, Calif., as well as into homes for Khloe Kardashian and Cher. 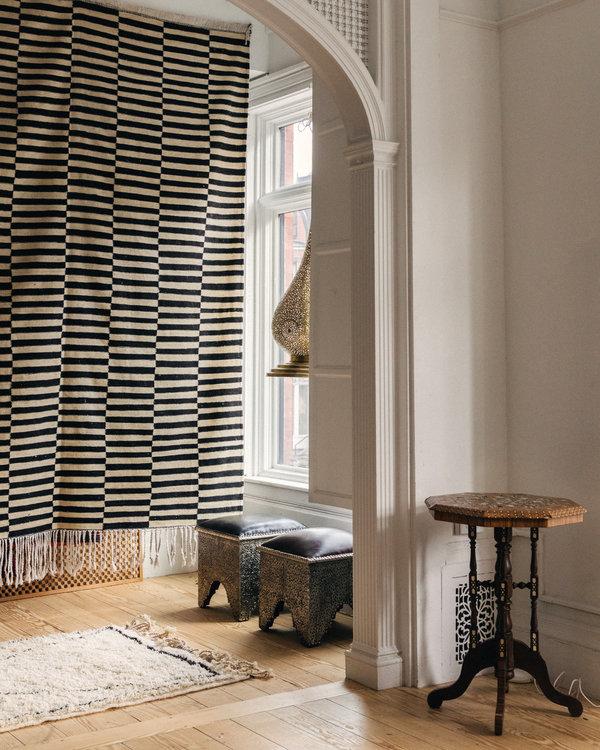 “You can put it in the most modern house, or the most traditional, and somehow it still freshens up the interiors,” he said. “It adds glamour, it adds sex appeal, but it still can feel really fresh.”

Start with color, and no, not bright blue. “The colors I most associate with Morocco are the warm, earthy, rich reds that echo the spices found in markets all over the country, the earthenware that is so often decorated and the natural red clay that is used to paint the majority of buildings in Marrakesh,” said Charlotte Cosby, the creative director of Farrow & Ball, the British paint and wallpaper company.

This Moroccan stand can hold cookies or fruit. It’s $150 at Marrakech Designs in Boston.CreditCody O’Loughlin for The New York Times

For a truly intimate Moroccan feel, Ms. Cosby said that she believed that you must “paint all four walls in the room, including the ceiling.”

Daniel Torres, a Los Angeles designer, did just that — and a whole lot more — for a client in Mérida, Mexico, who bought a run-down colonial-era building with the dream of creating a Moroccan-style home. Mr. Torres designed what he describes as a “mini-riad,” where the public rooms opening to a central courtyard have soaring arches and lots of tile and color.

Martyn Lawrence Bullard spent three years redesigning the Sands Hotel & Spa, a 1950s property two miles east of Palm Desert, Calif. It is now reborn as a Moroccan paradise, complete with a lobby surfaced in tiles from Mr. Bullard’s own Eastern Promise collection, which was made in Morocco. “It’s a really strong, graphic vibe that feels incredibly modern, even though some of those designs are 14th- and 15th-century,” he said. The tiles start at $24.94 per square foot; annsacks.com.CreditJaime Kowal

Shops and websites around the world carry everything to outfit a place in Moroccan style. Some businesses, like Ms. Rudloe’s, will even customize your tile, paint color and woodwork.

A more adventurous option is to wander the souks of Marrakesh, Tangier or Fez on your own. Or tap a local expert, like Maryam Montague, a hotelier, product designer and author of the 2012 book “Marrakesh by Design”(Artisan).

Frank DiBiasi, an interior designer who lives in Tangier, said he liked using perforated-metal lanterns for the mood they create. They “give off fanciful patterns of light on your walls, and create an instant romantic and flattering atmosphere, whether lit by candles or light bulbs.” Ember lantern, $28-$48 at Anthropologie; anthropologie.com.

Ms. Montague, who was born in Cairo and raised in Tunis and New York, leads personalized shopping tours of Marrakesh that she will tailor to your preferences. She also offers weeklong Design Safaris, with visits to artisans’ studios, palaces and private residences.

Be forewarned: Morocco has seduced even the most jaded world travelers. “There’s something in the air there,” Mr. Bullard observed. You might innocently arrive for a curated shopping experience in the fabled Pink City of Marrakesh and end up like Yves Saint Laurent, who bought a house there after his first visit.

Maryam Montague’s shopping tours of Marrakesh often include a stop at Arts of Marrakech, shown here. (The tours are $900 for one to four people; PeacockPavillions.com.)CreditMelinda DiMauro
FacebookshareGoogle+sharePinterestpin it
Efforts to Contain Ebola Epidemic Are Faltering, Aid Leader WarnsFinding Art Beyond Darkness
Latest