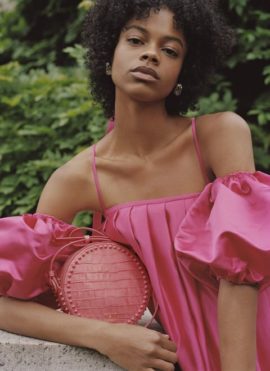 Kate and Laura Mulleavy are skipping New York Fashion Week—except they’re totally not. The Rodarte designers (and California sisters) did a sneak attack on the style world this month, dropping a look book into the ether that put Rowan Blanchard, Gabrielle Union, Yalitza Aparicio, and more Hollywood favorites into their newest collection. Last night, Lili Reinhardt lured the fashion spotlight to Toronto in a white Rodarte gown and logo belt (!) at the Hustlers premiere. And today, they debut their first-ever collection for Cole Haan, a wonderland of croc-embossed leather, tiny pyramid studs, and mesh lace overlays.

“We wanted a heel that didn’t feel like a heel,” says Kate of the shoes, which include two stiletto styles, lace and leather boots, and a pointed-toe loafer with spikes at the toe-cap. “We were obsessed with that idea because it’s not just something other women want. It’s a personal point of view—it’s something I want!”

“As designers, it’s our job to think about the body’s needs,” adds Laura. “So we started asking ourselves and the people in our lives, ‘How are you getting from point A to point B? Are you running to appointments all day? How many fashion shows do you need to attend? What are you doing tonight? And will you need to take an extra pair of shoes with you, just to get through your day?” A day that—for Rodarte besties like Kirsten Dunst, Natalie Portman, and the Haim sisters—often includes photo shoots, creative meetings, and occasional sprints from the paparazzi. “I think you can run pretty well in the heels!” laughs Kate. “It’s important.”

Also important: a new push for pairings, as the Cole Haan collection has matching bags for every pair of shoes, including a small circle bag, and a larger satchel that folds neatly at the corners. It’s a move that echoes Rodarte’s own inbox requests. “Something we’ve found is that when someone invests in a Rodarte piece, they often come back a few months later. They’re like, ‘Hey, I love this skirt so much. Isn’t there a top that goes with it? Isn’t there a jacket?’ And often,” sighs Laura, “We’ve already sold out.”

“You can wear our clothes however you want, obviously,” adds Kate, “But in the world of Rodarte, you want to put everything on everything. We design the pieces to go together, and that’s where a lot of the drama is, if you really want to go for it. It’s the same with the Cole Haan collection. The bubblegum pink pump looks so cool with the bubblegum pink bag. They look cute together. Match everything up. Get dramatic… but you know, part of why I love making shoes and bags so much is because it’s not dramatic, it’s practical. Most of our pieces are for special occasions,” like Mandy Moore’s wedding, where she donned a Rodarte gown. “Shoes are part of every day of your life. Knowing we made something that people wear every day? That’s really special to me. I want our shoes in your life.”

Or, as Laura admits, under your desk. “My shoes are in a big pile in our studio,” she says. “I sit down to work on something, I kick them off, and then maybe I’ll just pull a different pair on. It’s a vortex, for sure. But when you look down, at least you think, ‘Whoa. Those look fantastic.'»