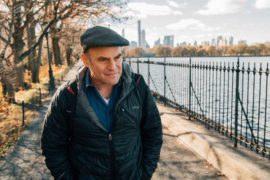 Peter Sagal, the very fast-on-his-feet host of the weekly NPR news quiz “Wait Wait … Don’t Tell Me!” and the author of a new meditative memoir, “The Incomplete Book of Running,” was half an hour late for an appointment to buy running gear on a recent Tuesday morning.

And all because Mr. Sagal, in town to tape a pair of shows at Carnegie Hall, had gone for a run. The five-mile tour took him from his hotel on the Lower East Side to Brooklyn via the Manhattan Bridge, then across the Brooklyn Bridge back to square one, Ludlow Street, with a time-gobbling course correction along the way. Which is to say that somewhere in Downtown Brooklyn Mr. Sagal got a little bit lost.

After a phone call to apologize and reschedule, followed by another brief detour for a shower and breakfast, Mr. Sagal, newsboy cap on his head, arrived at Urban Athletics on the Upper East Side. He was almost immediately drawn to the footgear display and pointed out a gray and blue sneaker, the Brooks Adrenaline GTS, that has supported him for 15 years through 14 marathons and thousands of miles of midlife crisis pavement pounding. He has 30 pairs of assorted vintages and in assorted states of disrepair.

“Like a lot of people, I find a running shoe that works and I stick with it,” said Mr. Sagal, 53. “You know, when I met David Sedaris, the one thing he asked me was about my shoe size.”

“I said, ‘What an incredibly weird thing to ask,’» continued Mr. Sagal, who, for the record, wears a 9 and a half wide. “And he said ‘no, I’ve been asking everybody.’ And when I told him, he said, ‘Interesting, you have small feet.’ A very bizarre conversation.”

Mr. Sagal had the look of a little boy who’s been almost convinced by his parents that the toy store in which they’re wandering is really a museum. “As a Jew and the child of Jews I am frugal — never pay retail,” he said. “And you get a lot of free stuff if you do races. I have piles of free shirts and sweatshirts and gloves.

Mr. Sagal and Jerry Macari, the owner of Urban Athletics, amiably debated the merits of 7-inch versus 5-inch shorts, and Mr. Macari urged him to try on a pair of Nike half-tights ($45).

“You typically wear a pair of briefs underneath to hold your stuff and that’s it, you’re good to go. I’m 59,” the proprietor said encouragingly. “I’m not that modest anymore. I don’t care.”

“I don’t care either,” said Mr. Sagal, who despite a stated lack of enthusiasm for both Nike and its advertising slogan, headed for a fitting room, then came out to the sales floor for a quick fashion show ending with an extended leg.

Those knees! Those thighs! Sold.

Mr. Sagal had guided William Greer, a runner who is legally blind, through the 2013 Boston Marathon. The two crossed the finish line barely five minutes before the bombing there, “and a photo of me taken just before the start of the race went mildly viral,” Mr. Sagal said. “My quadriceps came in for some admiration.”

In the fall of 2011, Mr. Sagal ran the Philadelphia Marathon with a time of 3:09, a personal record, “and the publishing industry was apparently very interested in what a radio host had to say about running,” he said. 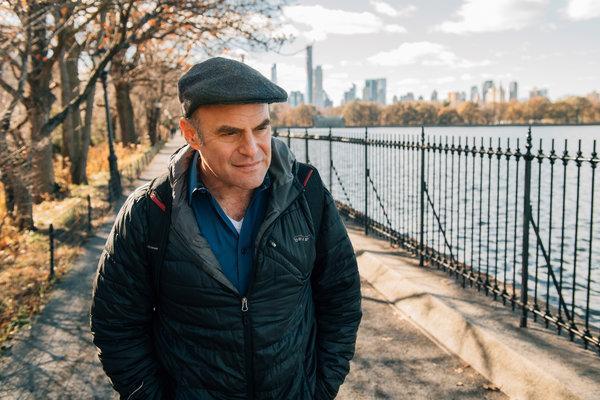 The manuscript became something quite different thanks to a couple of explosions: the one at the Boston Marathon, and of Mr. Sagal’s 19-year marriage. A breezy book no longer seemed quite the thing.

“Let me see if there’s anything else I need,” Mr. Sagal said, considering a rack of outerwear. “Do people come in and say ‘I want what Mo Farah wears?’” he asked, referring to the British distance runner and Olympic gold medalist.

“That happens very little in the running world in my experience,” Mr. Macari told him. “Basketball is a whole different thing. Track and field is not a sexy sport.”

“That’s my theory too,” said Mr. Sagal, who paid for his tights, then headed toward Central Park for a walk, alternating between the bridle path and the reservoir, along the way pointing out a stretch of field where the eldest of his three daughters played as a toddler during a family trip to New York.

“One of the things I tell people,” he said, “is that if I had applied the discipline and planning to anything else in my life that I did to running, I would have a Nobel by now.”

“I didn’t know how to deal with my domestic situation,” added Mr. Sagal who got married again in June, to Mara Filler, a stage manager. “But looking back on myself it was probably really comforting to think, ‘let’s see if I can run a marathon in under a certain amount of time.’ I was probably attracted to the coherence of it. It was a high contrast to everything else.”

He continued walking, eyes fixed hard at the skyline.

“May I just pause and say that New York is looking really weird,” Mr. Sagal said, suddenly recognizable once again as that funny guy on the radio. “All those bizarre slender towers. It’s very science fictiony. They look like they’re homes for space aliens.”

“People say they’re occupied by Russian oligarchs,” he added, “but we don’t know.”

FacebookshareGoogle+sharePinterestpin it
On the Runway: Nancy Pelosi’s Coat Catches FireOn Comedy: Ellen DeGeneres Is Not as Nice as You Think
Latest