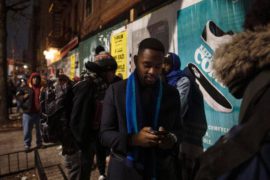 Aml Ameen stamped his feet against the cold outside the Nuyorican Poets Cafe. It was Wednesday, which meant an open mic poetry slam, and Mr. Ameen, 33, who stars in “Yardie,” a British crime drama directed by Idris Elba, wanted to make his slam debut.

“I may not become the greatest poet who ever lived,” said Mr. Ameen, who has been writing poetry since he was a teenager. But he thought he’d give it a try.

He had arrived an hour before the 9 p.m. start time and was fifth in line. The first 12 people would secure slots in the slam; three other spots would be awarded by lottery. “I’m a bit nervous,” he said, as he leaned against a boarded-up building and huddled deeper into his pinstriped overcoat.

Behind him, the line grew to about 60 people, snaking down East Third Street past apartment buildings, a post office, the bodega on the corner of Avenue C.

In London, where Mr. Ameen was born, people on the street often recognize him, mostly for a starring turn as a troubled teenager in the 2006 British drama “Kidulthood,” sometimes for the dodgy police officer he played on “The Bill” (think “NYPD Blue,” but with nifty uniforms). In the East Village line, though, no one gave him a second glance. 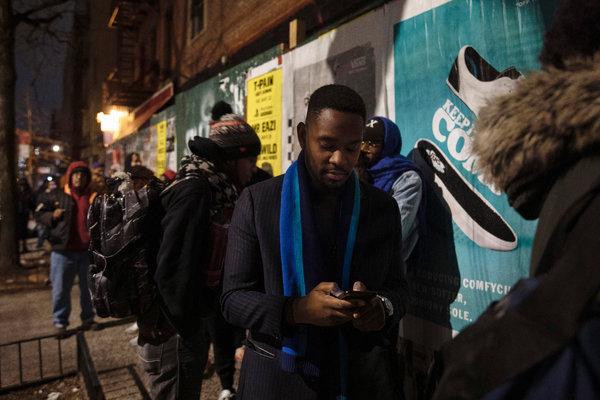 Mr. Ameen arrived an hour early and was fifth in line. CreditFlo Ngala for The New York Times

“My career has been more of a slow burner,” he said, looking as if he wouldn’t have minded if a few adoring fans had strolled by.

That may be changing. After some decent parts (including in “The Maze Runner” franchise and the Netflix series “Sense8,”), he landed the leading role in “Yardie,” in which he plays D., a Jamaican man who smuggles a small blizzard of cocaine into 1980s London.

To prepare, Mr. Ameen, who now lives in Los Angeles, spent several months in Jamaica (his mother is Jamaican-born, and his father is from the Caribbean island of St. Vincent), living with an aunt, perfecting the gestures, the swagger, the Kingston intonations. He went full method on set, staying in character all day, all night, Daniel Day Lewis style.

“You end up sitting back inside yourself,” he said.

At the Nuyorican, he had no character to hide behind. He planned to recite an intensely personal poem. He had written the first half as a teenager, dreaming of fame. The second half, which ponders the deaths of close friends and the hazards of focusing only on his career, was composed earlier that week.

Just after 9 p.m., the doors opened and Mr. Ameen slid into the cafe, which occupies the narrow ground floor of a tenement building. He made his way down the central aisle, where the slam’s host, Jive Poetic, waited with the sign-up sheet.

The poets ahead of him had all chosen later slots, hoping for a warmed-up (read: wined-up) audience, but Mr. Ameen didn’t feel like waiting. He signed up for the fourth slot.

He was soon joined by his father, Bilal Ameen, and his father’s friend Lawrence Augustus (both had flown in from London to spend time with Mr. Ameen for “Yardie” promotional events). He settled them into chairs near the stage and brought them cups of red wine. His father immediately turned to the two young women behind him to talk up his son.

“He’s just making himself comfortable,” Mr. Ameen said, as he headed back to the bar for his own cup of wine, “to strengthen myself.” Then he hunkered near the exit, head bent, eyes closed, lips moving silently as he practiced his poem. He absently stroked his goatee, as the club’s lights flashed off his skin.

“I stay still when I’m nervous,” he said.

Jive Poetic explained the rules. Each poet would have three minutes and 20 seconds. No songs, no props, no animal acts, minimal intros. “Please keep all of your clothes on,” he said.

He asked for three audience volunteers and handed them scoreboards. Each would score the poets on a scale of 1 to 10; the three scores would then be totaled. The four highest scorers enter a semifinal round. One poet would advance to a championship slam.

“I hope that not everyone who goes before me is crazy amazing,” Mr. Ameen said.

“I hope that not everyone who goes before me is crazy amazing,” Mr. Ameen said.CreditFlo Ngala for The New York Times

The first three poets took the stage, scoring 23.9, 21.2 and 27.4. Then it was his turn. He shook out his nerves and loped up the aisle, smiling out at the crowd like they were his new best friends, and reciting from memory a rough pentameter:

“Excuse me while I fantasize on my dreams.

People loving and respecting my name,

What I’m searching for, could it be fame.”

He continued to the second part. “Those were simple flows of a 17-year-old,” he said, before transitioning to the second part, a sober reflection of his “five broken hearts” and a friend’s thoughts of suicide. He finished:

Please don’t leave me, like Uncle Leo just did.

I promise you, give me five more years,

I’ll achieve some of things we discussed as kids.

Mr. Ameen stayed for several more poets, and it became clear he would not advance to the next round. He slipped out at around 11 p.m. Missing the semifinals, he said, didn’t faze him.

“It felt personal, and it felt very honest,” he said, as he pulled on a beanie. He hadn’t gone method. He had just been himself. “A good, good feeling.”