Drug Companies and Doctors Battle Over the Future of Fecal Transplants 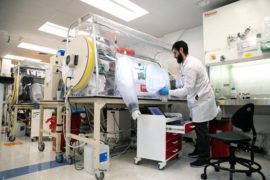 CAMBRIDGE, Mass. — There’s a new war raging in health care, with hundreds of millions of dollars at stake and thousands of lives in the balance. The battle, pitting drug companies against doctors and patient advocates, is being fought over the unlikeliest of substances: human excrement.

The clash is over the future of fecal microbiota transplants, or F.M.T., a revolutionary treatment that has proved remarkably effective in treating Clostridioides difficile, a debilitating bacterial infection that strikes 500,000 Americans a year and kills 30,000.

The therapy transfers fecal matter from healthy donors into the bowels of ailing patients, restoring the beneficial works of the community of gut microbes that have been decimated by antibiotics. Scientists see potential for using these organisms to treat diseases from diabetes to cancer.

At the heart of the controversy is a question of classification: Are the fecal microbiota that cure C. diff a drug, or are they more akin to organs, tissues and blood products that are transferred from the healthy to treat the sick? The answer will determine how the Food and Drug Administration regulates the procedure, how much it costs and who gets to profit.

In 2013, the F.D.A. announced a draft decision to regulate the therapy as a new drug but said it would continue to study the matter before reaching a final decision — which is expected to happen soon. Critics say that approach is based on outdated science and could lead to increased costs for patients, most of whom currently rely on a nonprofit stool bank in Cambridge. At stake, some researchers says, is the future of pioneering therapies that harness the human microbiome — the trillions of organisms that colonize the body and are increasingly seen as critical for healthy brain development and immune function. 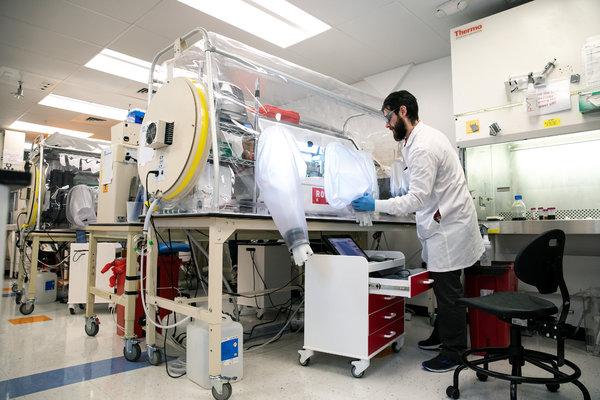 Tony Volpini in the lab at Vedanta Biosciences, which, along with Rebiotix and Seres Therapeutics, has formed an association to advance its commercial interests with the F.D.A.CreditKayana Szymczak for The New York Times

An oral fecal microbiota transplantation product made by OpenBiome, a public stool bank in Cambridge.CreditKayana Szymczak for The New York Times

“People have good reason to worry because for many patients, fecal transplants are a matter of life and death,” said Catherine Duff, founder of the Fecal Transplant Foundation, a patients group. “The concern is that corporate greed will get in the way of patient access.”

As the F.D.A. nears a final decision, both sides are ramping up the pressure. More than 40 prominent gastroenterologists and infectious disease doctors recently wrote to the agency, urging it to rethink its approach.

Dr. Alexander Khoruts, a gastroenterologist at the University of Minnesota, said he feared the F.D.A. was favoring the interests of what he calls the “poop drug cartel,” a group of companies seeking approval for new ways to deliver the active ingredients in transplanted feces. Three of the companies, Rebiotix, Seres Therapeutics and Vedanta Biosciences, have raised tens of millions of dollars from investors and they recently formed an association to advance their interests with the F.D.A.

“An obscene amount of money is being thrown around by companies trying to profit off of what nature made,” said Dr. Khoruts. “I don’t think there are clear villains here, but I worry that the regulators are not caught up on the latest science and that the interests of investors may be exceeding those of patients.”

Pharmaceutical executives and some doctors argue that the drug model will help ensure the efficacy and long-term safety of a therapy whose mechanics remain poorly understood.

“The first principle of medicine is do no harm, and at the moment we don’t have a long-term track record of F.M.T.’s adverse effects,” said Dr. Sahil Khanna, an associate professor of gastroenterology at the Mayo Clinic who has conducted industry-funded clinical trials on fecal transplants. “We also need to move away from transferring poo from one person to another.”

Experts in the field of bioethics and many doctors are pressing the F.D.A. to come up with a new regulatory category that reflects the groundbreaking nature of microbiota therapies.

Much like the fight over prescription drug prices, the “poop wars,” as one doctor described it, mirrors long-running tensions in American health care between pharmaceutical companies and patients.

Human feces, it turns out, are a potential gold mine, for both medical researchers and drug makers.

According to the analytical firm GlobalData, the market for drug-based treatments for C. diff is expected to reach $1.7 billion by 2026, up from $630 million in 2016. The growth is tied to soaring rates of C. diff, which parallel the overuse of antibiotics, leaving patients more vulnerable to the infection.

Inspired by the success of fecal transplants for C. diff, scientists are racing to develop similar treatments for an array of ailments and disorders, among them obesity, autism, ulcerative colitis, and Alzheimer’s and Parkinson’s diseases.

Investors, too, have taken note, and they are pouring tens of millions of dollars into start-ups chasing the next microbiota breakthrough.

“The whole field is screaming forward faster than anyone could have imagined,” said Lee A. Jones, chief executive of Rebiotix, which is testing two products to treat C. diff. “The microbiome has the potential to change the way we look at and treat disease.”

Such exuberance is a far cry from what researchers experienced when they first tried to sell the curative power of human feces.

Mark Smith, a microbiologist at M.I.T., was halfway through his pitch with a group of pharmaceutical executives when one of them interrupted to ask if the meeting was a prank. “I can’t believe you wasted my time with this crazy idea,” the man said, Dr. Smith later recalled.

That was 2012. Later that year he helped found OpenBiome, the nonprofit stool bank that now supplies most of the fecal matter for transplants in the United States. Three years ago, he started his own drug company, Finch Therapeutics, which has raised $77 million.

Over the past decade, tens of thousands of Americans with C. diff have been cured through fecal transplants, often with a single dose that can bring patients back from the brink of death. The treatment has more than an 80 percent success rate, according to several studies, and many patients feel better within hours of receiving the procedure, which is usually administered through colonoscopy or capsules containing desiccated fecal matter.

The F.D.A. has not formally approved the therapy but it has suspended enforcement of its rules for patients who have failed on antibiotics while it figures out the best way to regulate a regimen that, until recently, was sometimes performed at home by desperate patients using an enema, saline and a relative’s stool. Ms. Duff, the head of the C. diff patients group, credits her own recovery from the disease to a homemade concoction her husband created with his own stool in the kitchen blender.

The F.D.A. declined to comment for this article. Until the agency finalizes its decision, many insurance companies will not cover the therapy.

Treating fecal transplants like a new drug requires pharmaceutical companies to submit proposed products to an exhaustive investigative process to assess their efficacy and safety, which can cost millions of dollars.

Critics fear that designation would allow a drug company to gain the exclusive right to sell a fecal transplant treatment for up to 12 years, a move they say would stymie innovation.

Some also worry that patients unable to afford a company’s proprietary therapy could turn to home remedies, putting them at risk for pathogens in unscreened stool.

For now, most of the material used in fecal transplants comes from OpenBiome, the public stool bank in Cambridge that embraces its mission with both humor and gravitas. Giant poop emojis decorate its offices, conference rooms are named after sections of the intestinal tract and employee birthday cakes invariably come in one flavor: chocolate.

The organization produces 900 to 1,000 monthly treatments, most of them bottled liquids that are packed in dry ice and sent overnight to clinics across the country. Any unpleasant odors are confined to an airtight production facility, where employees in white hazmat suits gingerly handle clear plastic bags filled with a mud-colored slurry.

The material comes from donors who earn $40 a pop and must pass intensive screenings and regular medical checkups. “It’s harder to become a stool donor than it is to get into M.I.T.,” said Carolyn Edelstein, who runs the organization.

In 2012, Ms. Edelstein created OpenBiome with Dr. Smith, now her fiancé, after her cousin contracted recurrent C. diff and, facing a six-month wait for the procedure, did it at home with a roommate’s stool.

A few months later they started OpenBiome with seed money from a foundation and sent out six treatments that first year. “It’s been a wild ride,” Ms. Edelstein said as she showed off a room full of mammoth freezers that hold thousands of screened stool samples.

But OpenBiome and other stool banks are facing an uncertain future. Drug companies, which have been struggling to funnel patients into the clinical studies that are required for F.D.A. approval, would like federal officials to restrict the stool bank’s ability to distribute fecal matter in the hope that more patients will enroll in their trials.

The F.D.A. has ramped up oversight of OpenBiome’s production, leading to more rigorous testing and higher prices, which will double to $1,600 this month.

Stephen Shaw of Providence, R.I., was successfully cured of C. diff with a fecal transplant.CreditKayana Szymczak for The New York Times

Patient advocates expect those prices to jump exponentially should the F.D.A. grant market exclusivity to one of the companies that are in the final stages of testing alternatives to raw stool transplants.

Her patients share her worry. Stephen Shaw, 66, a retired truck driver, spent much of last year tethered to a toilet as he battled C. diff. A diabetic, Mr. Shaw acquired the intestinal affliction the way many people do: during hospitalization for a series of infections treated with repeated rounds of antibiotics.

“I couldn’t go anywhere for fear I was going to blast out,” he said, recalling the many times he soiled himself. “My life was destroyed.”

In late December, Dr. Kelly administered a fecal transplant via colonoscopy, and within hours, Mr. Shaw started feeling better. By Christmas his bowel movements had returned to normal.

“I never imagined the solution to my nightmare could be so simple,” he said. “I just hope Big Pharma doesn’t make it unaffordable for the people like me.”