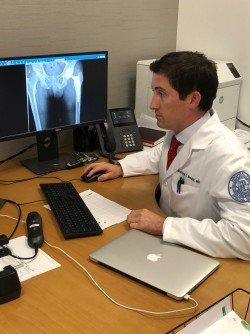 People with diabetes who undergo joint replacement surgery are at sharply higher risk of experiencing elevated blood sugar after the operation, increasing their chances of developing infections and other complications, according to a new study by researchers at Hospital for Special Surgery (HSS) in New York City and The Ochsner Health System in New Orleans.

Previous studies have shown that high blood sugar, or hyperglycemia, during the perioperative period of orthopedic joint replacement surgery is a risk factor for infection. The new study, by Bradford Waddell, MD, a hip and knee surgeon at HSS, took a narrower look at the question. It included patients with a diagnosis of diabetes whose blood sugar was being controlled using the hormone insulin and compared them to diabetics who did not require insulin. Patients requiring insulin can be considered to have more severe diabetes and have a greater chance of experiencing elevated blood glucose in the perioperative period, Dr. Waddell said.

For the new study, Dr. Waddell and his colleagues reviewed the medical charts of 773 men and women who had undergone total hip or knee replacement between 2011 and 2016. Of those, 437 had been diagnosed with insulin-dependent diabetes, while 336 had not been diagnosed with the condition.

Patients with insulin-dependent diabetes were more than five times as likely as those without the condition to develop hyperglycemia, or high blood sugar, after surgery (odds ratio, 5.2; P<0.0001), the researchers found. Patients with higher blood glucose over the previous three months—as measured by hemoglobin A1c—were more likely to experience post-operative hyperglycemia regardless of which group they were in. An A1c above 6.59 for people with insulin-dependent diabetes, and 6.6 for those without the condition, was associated with an elevated risk for post-operative hyperglycemia (P<0.0001).

Despite the increased risk for elevations in blood sugar after surgery, however, the incidence of post-operative joint infections did not differ between the two groups of patients. However, Dr. Waddell noted that a limitation of the study was that it was underpowered to detect the risk of infection.

The bottom line for clinicians, Dr. Waddell said, is «if your patient comes in with diabetes and is dependent on insulin, you need to be more cognizant of controlling their blood sugar in the perioperative period because they’re at higher risk.»

The HSS researchers presented their findings at AAOS 2019, the annual meeting of the American Academy of Orthopaedic Surgeons.

About HSS | Hospital for Special Surgery

HSS is the world’s leading academic medical center focused on musculoskeletal health. At its core is Hospital for Special Surgery, nationally ranked No. 1 in orthopedics (for the ninth consecutive year) and No. 3 in rheumatology by U.S.News & World Report (2018-2019). Founded in 1863, the Hospital has one of the lowest infection rates in the country and was the first in New York State to receive Magnet Recognition for Excellence in Nursing Service from the American Nurses Credentialing Center four consecutive times. The global standard total knee replacement was developed at HSS in 1969. An affiliate of Weill Cornell Medical College, HSS has a main campus in New York City and facilities in New Jersey, Connecticut and in the Long Island and Westchester County regions of New York State. In addition, HSS will be opening a new facility in Florida in late 2019. In 2018, HSS provided care to 139,000 patients and performed more than 32,000 surgical procedures, and people from all 50 U.S. states and 80 countries travelled to receive care at HSS. In addition to patient care, HSS leads the field in research, innovation and education. The HSS Research Institute comprises 20 laboratories and 300 staff members focused on leading the advancement of musculoskeletal health through prevention of degeneration, tissue repair and tissue regeneration. The HSS Global Innovation Institute was formed in 2016 to realize the potential of new drugs, therapeutics and devices. The HSS Education Institute is the world’s leading provider of education on musculoskeletal health, with its online learning platform offering more than 600 courses to more than 21,000 medical professional members worldwide. Through HSS Global Ventures, the institution is collaborating with medical centers and other organizations to advance the quality and value of musculoskeletal care and to make world-class HSS care more widely accessible nationally and internationally.

FacebookshareGoogle+sharePinterestpin it
Modern Love: How Do You Know When It’s Time to Break Up?How Big Tobacco Hooked Children on Sugary Drinks
Latest