Depo-Provera, an Injectable Contraceptive, Does Not Raise H.I.V. Risk 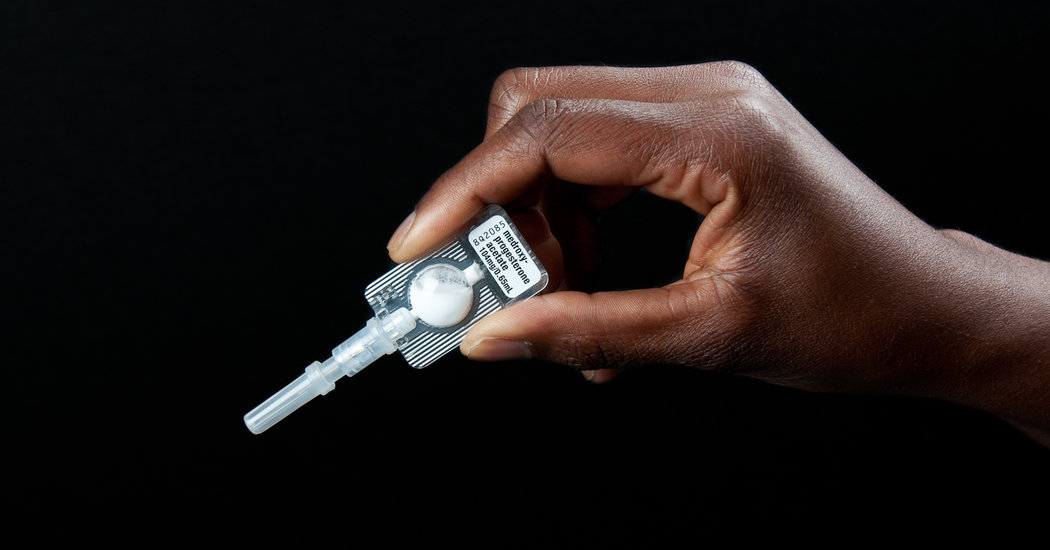 For decades, many African women in need of birth control they could use in secret have relied on intramuscular hormone injections that prevent pregnancy for three months.

But in recent years, women have been terrified — and family planning officials frustrated — as studies suggested that women using injectables were far more likely to get infected with H.I.V.

On Thursday, a major new study found that women who did were not at a much greater risk than they were from other contraceptive methods, including a hormone implant or a copper intrauterine device.The World Health Organization will view the study next month as it debates whether to give back the injectable its top safety rating. Two years ago, the W.H.O. lowered its rating one notch, but said the benefits still outweighed the risks.

The hormone is known as DMPA, for intramuscular depot medroxyprogesterone acetate, and is marketed by Pfizer under the brand name Depo-Provera.

The study, which involved more than 7,800 women in four African countries and was published in The Lancet, pleased advocates for women’s health.

The results “will be a relief to both women and health care providers in southern Africa, where Depo-Provera is the most commonly used contraceptive,” said Dr. Salim S. Abdool Karim, an H.I.V. expert at the University of KwaZulu-Natal in South Africa and Columbia University, who was not involved in the trial.

Still, he cautioned, Depo-Provera appeared to pose a “marginally” higher risk of H.I.V. infection than contraceptive implants, which are silicon tubes inserted under the skin that release only small amounts of hormone at once.

The results also remove some obstacles to contraception technologies of the future, said one of the study’s authors, Dr. Timothy D. Mastro, chief science officer at FHI360, a consultancy in North Carolina.

Birth-control shots that women can safely give themselves are being developed, as are injectables that last six months. If the trial had found hormonal methods dangerous, “a whole avenue of advances would have been shut off,” Dr. Mastro said.

Depo-Provera is a mainstay of family planning across much of Africa, where H.I.V. remains rampant. In public health clinics, the shot is sometimes the only choice offered.

Three years ago, India began officially urging women to choose it over tubal ligation, which the government had long promoted.

In Africa, women often prefer Depo-Provera because many men refuse to use condoms and the injectable is easier to conceal than daily pills. Some women fear being abandoned, humiliated or even beaten if they are caught avoiding pregnancy.

“Their husbands or partners, and their families, often want them to have children,” said Dr. Sheena McCormack, an H.I.V. specialist at Britain’s Medical Research Council who has conducted trials on H.I.V. prevention methods but was not involved in the current study.

Starting more than a decade ago, some scientists warned that Depo-Provera seemed to raise a woman’s risk of getting H.I.V. by 40 percent or more. One study even concluded that the risk was doubled among women using it.

Why that happened was unknown. Tests on monkeys suggested the hormone in the shot, progestin, might thin the protective vaginal mucus or make immune cells in the vaginal tract replicate H.I.V. more quickly.

But scientists had drawn their conclusions from epidemiological studies and lab tests. The new research, known as Echo (officially, Evidence for Contraceptive Options and H.I.V. Outcomes), was designed as a randomized clinical trial, the medical gold standard.

The study compared infection rates among thousands of women who each had to consistently use one of three modern birth control methods for 18 months. The idea at first was controversial.

Some epidemiologists said that it would be impossible to find enough women willing to choose unfamiliar methods, or that undetected condom use would skew the results.

Others, like Dr. McCormack, who was invited to lead part of the trial, had ethical reservations, because some of her previous work suggested Depo-Provera was dangerous.

“I wouldn’t put my daughter on Depo if she was at risk,” Dr. McCormack said. “It doesn’t make it a bad thing to have done the trial, but I just personally didn’t feel comfortable asking volunteers to do it.”

Two of the chief investigators, Dr. Jared M. Baeten of the University of Washington and Dr. Helen Rees of South Africa’s Wits Reproductive Health and H.I.V. Institute, said they had agreed with the trial’s backers, which included the Bill and Melinda Gates Foundation and the United States Agency for International Development, that the study would be stopped if it failed to meet recruiting standards or if any of the three methods were to clearly increase infection rates.

An outside committee assessed the data every six months and each time recommended that the trial continue, Dr. Baeten said.

Lauren Ralph, an epidemiologist at the University of California, San Francisco, was publicly skeptical five years ago that such a trial could be done well. But on Thursday she called it a “rigorous, well-executed study on a really complex topic.”

Noting the slight risk elevation for Depo-Provera, however, Dr. Ralph said she hoped the debate would not become so “settled” in favor of injectable hormones that work stopped on newer, even safer options for women.

In the study, over 7,800 women in South Africa, Kenya, Zambia and eSwatini — the former Swaziland — got Depo-Provera; Jadelle, an implant containing the hormone levonorgestrel; or Injeflex, a copper-infused IUD.

There was no control group of women denied contraception. That would be unethical, the authors said, since all the participants were recruited at clinics as they sought birth control. Moreover, unwanted pregnancies kill many women and infants in Africa, or lead to abortions.

For ethical reasons, as well, the women were given condoms and safe-sex advice, even though that should have reduced the odds they would get infected, the outcome that investigators were measuring.

In the trial’s final months, the women were also offered pre-exposure prophylaxis, or PrEP — a drug to prevent H.I.V. infection — as soon as it became standard treatment in their respective countries.

Over the course of the study, and despite all the precautions offered them, 397 women became infected. That alarmingly high rate — almost four percent a year — was even greater than other investigators had found in earlier trials of prevention methods.

“That’s a stark reminder that we’re not done with H.I.V.,” said Dr. Baeten, adding that the finding lent urgency to the need to introduce new forms of protection, like PrEP.

Nonetheless, the infection rates were roughly similar in all three groups: Of the 397 infected, 36 percent were in the Depo-Provera group, 35 percent in the copper IUD group and 29 percent in the Jadelle group.

Small differences like those were not considered measurable in a trial this size. Determining the exact difference between Depo-Provera and the IUD, for example, would take a far larger and prohibitively expensive trial.

As birth control, Depo-Provera appeared to be the most effective alternative and to have the fewest side effects; users of the IUD became pregnant slightly more often.

Dr. Rees, whose earlier studies had also produced data suggesting Depo-Provera was dangerous, declined to say whether she was surprised by the Echo results or to speculate on how the W.H.O.’s expert committee would react.

Until now, “no one could put their hands on their hearts and say they’d eliminated the confounders,” she said, referring to unknowable elements, like human behavior, that render trial results shaky. “We’re very pleased that we did a high-quality study.”