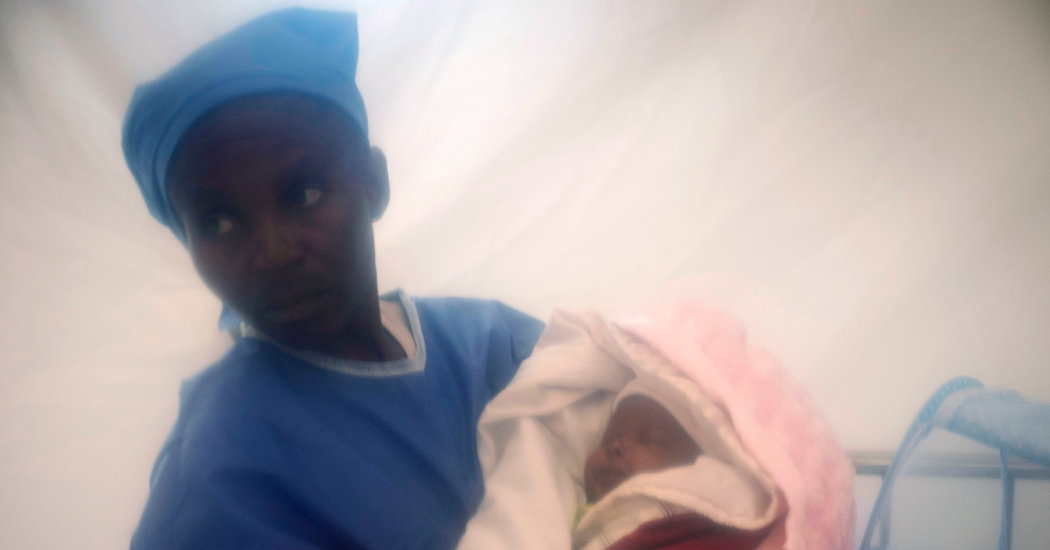 JOHANNESBURG — Congo’s Health Ministry says a newborn baby called Benedicte is the youngest survivor of what is now the world’s second-deadliest Ebola outbreak.

The ministry posted a photograph of the infant on Twitter this past week showing her surrounded by caregivers who had watched over her 24 hours a day for weeks.

The baby, who was admitted to an Ebola treatment center six days after birth, has recovered from the virus, medical officials say. Congolese are calling her the “young miracle.”

The baby’s mother, who also had Ebola, died in childbirth, the ministry said.

The infant was discharged from the treatment center in Beni on Wednesday. “She went home in the arms of her father and her aunt,” the ministry said.

Experts have reported high numbers of children with Ebola in the outbreak, which the Health Ministry of the Democratic Republic of Congo says now has 467 confirmed cases, including 255 confirmed deaths.

In video footage shared by Unicef, Benedicte is shown in an isolated treatment area, cradled in the arms of health workers in protective gear or cuddled by Ebola survivors, called “nounous,” who can go without certain gear such as masks. The survivors are crucial with their reassuring presence, the ministry said.

“This is my first child,” said the child’s father, identified only Thomas. “I truly don’t want to lose her. She is my hope.”

Children now account for more than one-third of all cases in the outbreak, Unicef said this past week. One in 10 Ebola cases involves a child under the age of 5, the agency said, and children who contract the hemorrhagic fever are at greater risk of dying than adults.

Ebola is typically spread by infected bodily fluids. While adults are most likely to be infected with the lethal virus, children have been known to catch the disease when they act as caregivers.

Few cases of Ebola in babies have been reported, but experts suspect transmission may occur through breast milk or close contact with infected parents.

The World Health Organization has noted that health centers have been identified as a source of Ebola transmission in the outbreak, with injections of medications “a notable cause.”

So far, more than 400 children have been left orphaned or unaccompanied in the outbreak as patients can spend weeks in treatment centers, Unicef said. A kindergarten was opened next to one treatment center in Beni “to assist the youngest children whose parents are isolated” there, it said.

Health experts have said the Ebola outbreak, the 10th in Congo, is like no other: Residents also face the threat of attack from armed groups and resistance from a wary population in a region that had never before faced an Ebola outbreak. Tracking the contacts of Ebola patients remains a challenge in areas controlled by rebels.

In October, rebels killed at least 15 civilians and abducted a dozen children in an attack in the center of the latest outbreak, Congo’s military said.

Congo is set to hold a presidential election on Dec. 23, with unrest brewing.

The latest assessment by the World Health Organization, released on Thursday, calls the circumstances “unforgiving.”

The agency said that the risk of the disease spreading from Congo to its neighbors is now very high. It said that nine countries were at risk of infection, citing the deterioration in security. But the agency concluded that the outbreak did not yet qualify as an international health emergency.

FacebookshareGoogle+sharePinterestpin it
Why Do Men Date Bitches & What to Learn from Them?Medical News Today: How to make kefir more healthful using sound
Latest