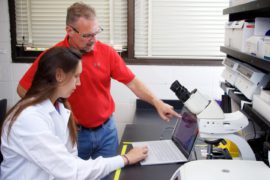 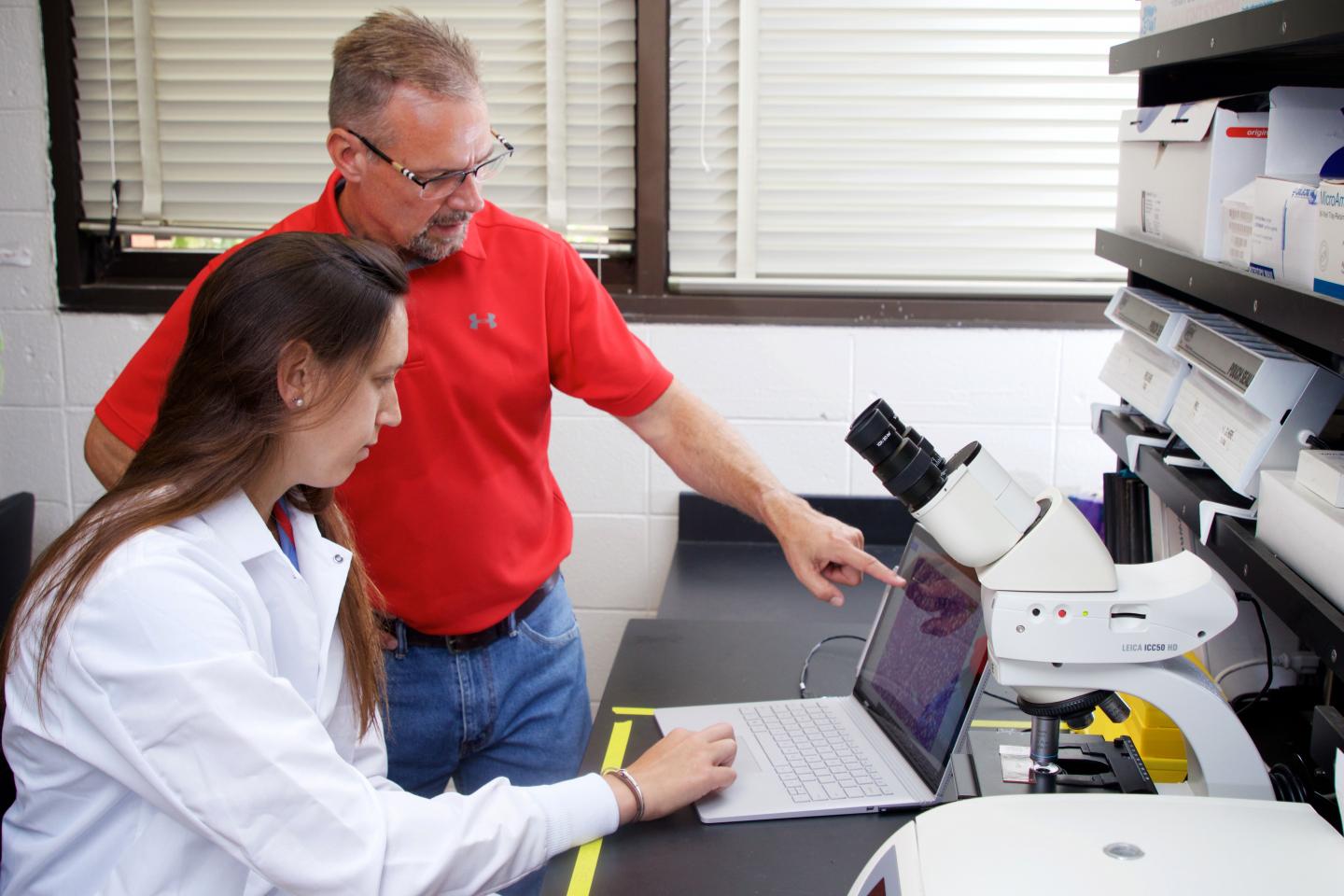 William Baldwin, professor and graduate program coordinator in the College of Science’s department of biological sciences, and members of his laboratory used a novel mouse model developed in their laboratory to study the role of the Cyp2b gene in obesity. Cyp2b is a key enzyme involved in metabolism, particularly in the detoxification of chemicals in the body. Among other results, the research indicates a role for Cyp2b in unsaturated fatty acid metabolism, regardless of diet. Certain chemicals could inhibit Cyp2b, a phenomenon modeled by Cyp2b-null mice.

The study titled «Cyp2b-null male mice are susceptible to diet-induced obesity and perturbations in lipid homeostasis» was published in the Journal of Nutritional Biochemistry. It is part of a three-year, $362,000 grant Baldwin received from the National Institutes of Health to continue studies on how exposure to chemicals is likely to inhibit our bodies’ internal mechanisms. Contributing to the paper were Melissa Heintz, Ramiya Kumar, Meredith Rutledge and Baldwin.

«The male Cyp2b-null mice are obese — and much more obese — than the wild-type mice that are also fed a high fat diet,» Baldwin said.

There are several possible implications to human health.

«If you are exposed to chemicals that are metabolized by Cyp2b or inhibitors of Cyp2b, this might mean that you are not metabolizing something else in the body that is important,» Baldwin said. «In turn, maybe your likelihood of retaining white adipose tissue increases and therefore your likelihood of being obese increases.»

In addition, male Cyp2b-null mice had increased fatty liver disease without being fed a high-fat diet.

«Cyp2b must be signaling something and telling the fat to go someplace, indicating that Cyp2b has dual roles: metabolizing toxicants and chemicals in the environment and pharmaceuticals, but it is also involved in metabolism of lipids and probably involved in signaling to tell us how to distribute fat,» Baldwin said.

With 40 percent of adults and 18.5 percent of youth in the United States now considered obese, the discovery that enzymes associated with detoxification may play a role in obesity — beyond the compounding effects of diet, exercise and general genetics — is critical.

Female Cyp2b-null mice did not show any greater propensity toward obesity, though there were indications that they have a higher rate of liver damage than wild-type female mice.

«When the Cyp2b-null mice are fed a regular diet, their livers are acting like they are being fed a high fat diet,» Baldwin said.

Heintz, a third-year Ph.D. candidate in environmental toxicology, said there are still many pathways to explore in this area of research.

«You might be healthy but you might be exposing yourself to a chemical in the workplace,» she said. «Even though your diet is pretty good, if you are losing this activity of an enzyme in your liver, what you may not have thought would be important may be important in metabolizing fat.»

This discovery also opens the door to exploring other enzymes that are currently thought to have one role but may also metabolize fat.

«Very little work has been done on this one particular enzyme, Cyp2b, and looking at its role in fatty acid metabolism,» Heintz said. «It’s just one gene and there could be more that do similar things.»

Kumar earned a Ph.D. at Clemson and is now a senior clinical process associate with a clinical research company in Bangalore, India. Kumar said future research will show whether chemical inhibitors of these genes, such as plasticizers and pesticides, could also elicit a similar change in metabolism and lead to obesity.

«It will help us to plan better treatment regimens for obesity, along with changes in lifestyle and diet,» Kumar said.

This research has the potential to inform how scientists look at a host of metabolic disorders and chronic conditions, all with the goal of increasing human health.

«I think it tells us that obesity — and potentially fatty liver disease — is a multi-component disease,» Baldwin said. «It is about, first and foremost, eating the wrong foods or eating too much. But we can make it worse by external factors — whether that’s chemicals, a lack of exercise or the components of our diets. There are a lot of little pieces to that, and this is one study that indicates that a healthy lifestyle involves a healthy diet, having the right calories and potentially avoiding some chemicals as well.»

FacebookshareGoogle+sharePinterestpin it
A Tour of the Tour BusesMedical News Today: What to know about circumcised and uncircumcised penises
Latest