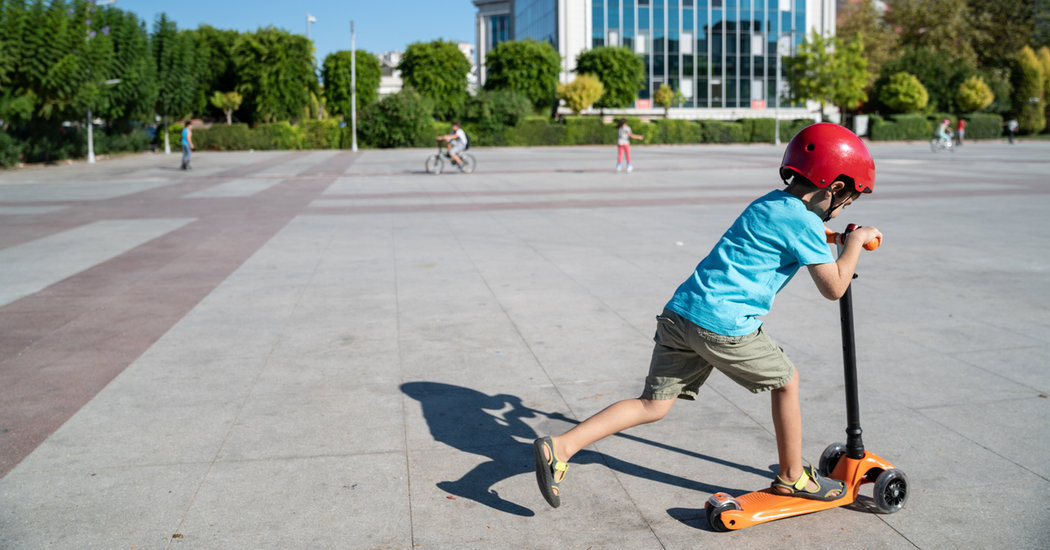 A 13-year-old patient recently talked to me about the amount of time he spends playing video games (plenty) and about his weight (heavier than he wants, and on the rise). I asked about exercise, and he told me proudly that he rides his bike a lot, now that the weather is good. And then, of course, I had to be the fun police, and ask whether he wears a helmet, and when he told me no, of course, I had to take the opportunity to deliver more good advice that I suspected he was not going to follow, and his parents were not going to enforce.

A national poll by C.S. Mott Children’s Hospital at the University of Michigan in May asked parents of children from 4 to 13 about safety rules when their children ride bikes, skateboards and scooters, and found that only 59 percent of parents reported their child always wears a helmet, with the number even lower for skateboards (42 percent) and scooters (39 percent).

Dr. Gary L. Freed, a professor of pediatrics and health policy at the University of Michigan and the co-director of the poll, pointed out that 50 percent of the parents in the poll reported that their children ride nonmotorized scooters, and these were more likely to be younger children.

Dr. Freed was also struck, he said, that only 22 percent of the parents whose children ride bicycles reported that they used hand signals when turning on the street, and only half walk their bikes across a crosswalk. “The best way to prevent an injury is to wear a helmet, and children need to follow the rules of the road,” Dr. Freed said.

Eighteen percent of the parents said their child never wears a helmet — and remember, my patient was at the upper end of this age bracket, that is, probably the end where it’s less likely that the child is riding under direct parental supervision.

So you know I’m going to say this, people, but helmets matter, for our kids and for us. Setting an example matters. You can get badly hurt in traffic, but you can also crash into something or get thrown off and hit your head and get badly hurt when there’s no traffic around. “Children look to parents to establish limits and to guide them in making safe choices,” Dr. Freed said. “The best rule that parents can have is no helmet, no bike.”

And yes, skateboards count, and scooters count. (The site safekids.org has a useful report about keeping kids safe.)

And then there’s what happens when you add in a motor. The American Academy of Pediatrics recommends against children under 16 riding motorized scooters. Russell Griffin, an associate professor of epidemiology at the University of Alabama, Birmingham, was the lead author on a 2008 study looking at scooter injuries across the United States in children from 2 to 12 years old. Injuries related to powered scooters were more than three times as likely to be severe.

They included more concussions, including severe head injuries, Dr. Griffin said, and more leg injuries. “People think, oh, it’s just a scooter,” he said, and they don’t take the risk seriously, but the center of gravity on a scooter is much lower than it is on a bike, and “there’s nothing that’s keeping you on the scooter.”

Studies have shown parents are less likely to enforce helmet rules for children riding scooters, he said in an email; perhaps because “parents do not perceive scooters as being as dangerous as bicycles; however, our study showed that not to be the case as 10 percent of injuries in our study were concussions, which is comparable to what is reported for bicycle injuries.”

Motorized scooters, available for rent in cities all over the United States and around the world, raise the stakes by increasing the speed. So far they are not permitted in New York City, but there is a bill under consideration that may change that.

[Read more about the issue of scooters in New York. | Read an editorial on scooters.]

I was in Paris last week where electric rental scooters whiz between the cars, swooping through crowded intersections, veering onto the sidewalk when that helps them move faster. Nobody wears a helmet.

It was absolutely terrifying — I kept thinking I was about to see a crash, and the riders, maneuvering on their slim vehicles, seemed even more vulnerable than bicyclists. Yes, they look suave and insouciant, but shouldn’t they have to follow traffic signals? Shouldn’t they be wearing helmets?

Sure enough, Paris, which has at least 12 different companies competing to rent e-scooters, now has a law making it illegal to ride scooters on the sidewalk as of September, and laws limiting scooter speeds. There have been lots of accidents with scooters striking pedestrians, in one case breaking the arm of the pianist at the Paris Opera.

E-scooter rentals were introduced in Salt Lake City in 2018, and Dr. Troy Madsen, an emergency physician at the University of Utah School of Medicine was one of the authors on a study published in May in The American Journal of Emergency Medicine, which looked at scooter-related injuries seen in the adult emergency room before and after the advent of the e-scooters.

Predictably, they saw more scooter-related injuries, but what was scary was how serious many of those injuries were. Dr. Madsen described some of them as “devastating head injuries.” He looked through all the charts, he said, and saw no mention that anyone was wearing a helmet. “You’re going pretty fast, 15 miles an hour,” he said. “If you try and jump off, you’re going to fall.”

There is a significant amount of user error in many of these accidents, he said, with people riding on sidewalks and trying to go up and down curbs. In addition, some of the riders reported that they had been intoxicated while riding.

Dr. Madsen said that other studies have found that 30 percent of the injuries on scooters occur on a person’s first ride, and two-thirds within the first 10 rides. “Inexperienced riders download the app and jump on,” he said. “Someone like me, I haven’t been on a scooter since I was a kid, and it didn’t have a motor.”

So here we are, looking ahead to a completely predictable — and largely preventable — set of devastating head injuries, and also, to a situation where adults have the opportunity to model good safety behavior.

“Make sure the kids are wearing the helmets,” Dr. Griffin said. Children should also be very aware of their surroundings, from cars to road conditions.

I did my best with my 13-year-old patient. We talked about how smaller kids might look to him as a model, about the importance of protecting his head and his brain. I want you to ride your bike, I said, several times, I just want to make sure you’re safe. I said it to his mother as well. Ever since that visit, though, I have this recurring fear that he might have changed to a scooter.

FacebookshareGoogle+sharePinterestpin it
Put Off by Venice’s Crowds? Try the Oasis Next DoorMedical News Today: Magnetic stimulation may reduce the impact of concussion
Latest