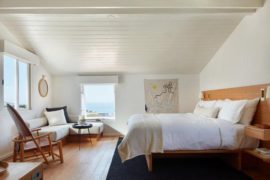 Carved out from Orange County by cliffs that slope down to the sparkling Pacific, Laguna Beach is a wildly popular bolt-hole for all manner of Californians, from Tesla-entombed tech worthies vaping down the freeway from Los Angeles to burbling families in boxy Odysseys looking for relief from the San Fernando Valley’s canned heat. It is also now home to the Hotel Joaquin, which opened in September 2018 after a gut-renovation of the shabbily serviceable Motor Inn at Laguna Beach. The Joaquin comes under the Auric Road corporate umbrella, which includes other swank “petite resorts” such as the Korakia Pensione in Palm Springs and the Lone Mountain Ranch in Big Sky, Montana. The airy redesign, featuring exposed rafters, oiled white oak ceilings, turntables instead of TVs, and vintage furniture from France, was the concept of the modish, New York-based studio of Robert McKinley, whose other laurels include The Surf Lodge in Montauk and The Hall in Miami.

The eight-mile stretch of Laguna Beach, with over 20 beaches and coves, three summer arts festivals, 50-plus art galleries and a population of eco-obsessed locals, was a favorite refuge for Bette Davis, Errol Flynn, Bing Crosby, Mary Pickford and fellow members of Hollywood royalty who lived, tippled or trysted amidst the town’s fragrant eucalyptus groves. Other notable residents have included the Harvard psychologist Timothy Leary, who commended the “Orange Sunshine” LSD brewed by a shaggy local outfit calling themselves Brotherhood of Eternal Love, and, more recently, the billionaire Dallas Mavericks owner Mark Cuban, who dropped $19 million on an 8,000 square foot home in December. The three-tiered, 22-room Joaquin is perched along the North Coast Highway, providing ocean views and salty breezes from several of its rooms and is a reasonable walk or short drive to all of the town’s surfing or paddling beaches, boutiques, galleries and restaurants. 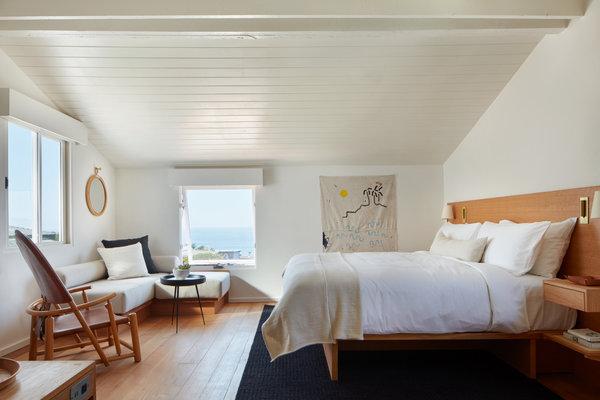 At the Hotel Joaquin, it may be worth upgrading to one of the rooms with an ocean view.CreditHotel Joaquin

Despite being on the lowest of three levels, my garden-side room had ample natural light and was invitingly divided by a couch to provide lounging space. I skipped the minibar, which had pre-mixed bottles of Negroni and Ginger Buck, and, turning to the Marantz turntable, ending up supplementing the in-room vinyl — The Beach Boys’ “Good Vibrations,” Carole King’s “Tapestry” — with the Thelonious Monk Quartet’s “Monk’s Dream” from the hotel’s stash. Books also furnished the room, including the poems of Rumi and a deckle-edged paperback of Kerouac’s “On the Road.” My off-season room cost $239; I’d highly recommend reserving one of the several rooms with an ocean view, which off-season start at $389. In-season, ocean-view rooms start around $522.

The bathroom was spacious, with a marble double-sink and large shower tiled in a soothing pale gray.

The hotel’s Mediterranean-inflected restaurant, Saline, serves a good breakfast (included with your stay featuring items such house-cured salmon and Berkshire pork sausage) as well as lunch and dinner, and so far is only open to hotel guests. At dinner, I ordered the charred artichoke with garlic aoli, dill and caper oil ($12), followed by the black sea bass ($25) and both did credit to the Argentine chef, Leo Bongarra. The cocktail list leans toward health-conscious inebriation; the “Saline g&t” contains opihr oriental spiced gin, Junipero gin, artisanal tonic syrup, soda, lemongrass, aloe vera and star anise, for $14. For the teetotaler, there’s the “No Booze Cruise,” a concoction of seedlip garden, fever tree Mediterranean tonic, ginger and pineapple at $11. The sparse wine features under-aged California pinots and lesser cabernets, with a few obligatory bottles of southern French reds.

A retro vibe in the ‘Living Room» announces itself by the turntable and collection of vinyl records.

Walking in to the “Living Room,” the hotel’s sun-streaked lounge, can feel like walking into an old (and rich) friend’s beach house. A retro vibe announces itself by the turntable and collection of vinyl records. Glistening water dispensers hold teardrop-shaped vials filled with gems, promising qualities such as “Love,” “Fitness,” and “Forever Young.” (Make mine a double!) At night, the hotel acquires the martinis-and-midnight swim mood of a chic Mid-Century California motel, updated for the hygge generation. By day, the hotel provides an “adventure guru” who will outfit you free of charge with surfboards, kayaks, paddle boards, bikes and even diving gear, and point you toward the miles of nearby hiking in the Laguna Beach Wilderness Park, biking trails such as the Rock-It/Cholla Loop, or surf breaks such as Brooks Street Beach, where 1960s surf champion Corky Carroll had many epic afternoons.

For a taste of one of Southern California’s most storied yet charming beach towns, Hotel Joaquin works hard to evoke a glamorous-yet-grounded experience, and succeeds.