Chasing the Perfect Slice, Bread and Salt in Jersey City Looks to Rome 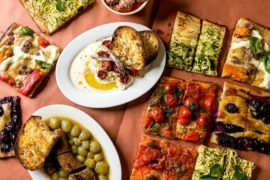 For a long time, the seriousness of a pizzeria could be gauged by a simple yes-or-no question: Did it sell pizza by the slice? The ones that cared the most about upholding traditions, maintaining quality and so on — like Totonno’s, John’s of Bleecker Street, Kesté, Lucali, Una Pizza Napoletana — emphatically did not.

Today, we live in the era of the elevated slice joint. Some of them, like Scarr’s, grind wheat berries into new flour every day. Many use minuscule quantities of yeast; others abandon commercial yeast altogether in favor of the natural leavening in sourdough starters. There are slice joints that ferment their dough for a day, some that let it bubble away for two days and a few that go in for three days. A new example of the breed, F&F Pizzeria, opened in Brooklyn last week with the help of a baker whose starter dough has traveled internationally and another baker who has decades of experience at the end of a pizza paddle. Among themselves, these new-school pizza makers speak of hydration levels, fermentation periods and digestibility.

Many of these slice masters are chasing an ideal version of the foldable, portable triangle sold across linoleum counters in all five boroughs, a search suffused with nostalgia for an era before processed cheese, sweetened sauce and wholesale dough. Others are celebrated for achievements in the square slice, a descendant of the Sicilian, with an airier, less doughy crust; leaders in this style include Corner Slice and Mama’s Too.

Perhaps the smallest group of all are the bakers who turn their eyes toward Rome, where the slices are rectangular and are known as pizza al taglio. They resemble focaccia more than a $3 slice from Ray’s, and it’s doubtful that the practitioners of this style even think of themselves as belonging to the elevated-slice movement. But I’d argue that they do belong to it, and that some of the most elevated slices in the area at the moment are the Roman-style ones that Bread and Salt sells inside its bakery and restaurant on Palisade Avenue, up in the Jersey City Heights.

At any given time, three to six pizzas sit on the counter. They are oblong and, because they are baked without a pan to shape the dough, they have rounded corners, like a horse track. The crust is noticeably lightweight when you pick it up, an impression that is confirmed by the mouth and, later, the stomach. The interior is honeycombed with air pockets. The underside of each slice is strong enough to carry a relatively heavy load of toppings without bending or collapsing.

This structural soundness is key to the pleasure. The toppings on a Bread and Salt slice are not decorations or seasonings, as they often are on round pizza. Each one is the point of its slice: a mix of fresh mushrooms with pepper, parsley and flecks of grated Parmigiano-Reggiano; zucchini shaved into fine threads and showered at the last minute with mint leaves; slices of late-summer red and yellow peppers picked while they still had few faintly bitter streaks of green reaching up their sides; a rough, dark pesto spooned around cherry tomatoes that were roasted until their skins turned black and pulled away from the globes of pulp inside; Concord grapes that blotch the dough with purple like exploded jelly grenades.

A chef’s hand is at work here, tossing black pepper and rosemary over the grape pizza, adding salt and excellent Sicilian olive oil to the tomato pulp, and hammering basil and hazelnuts for the pesto in a mortar. The hand belongs to Rick Easton, who oversees the pizzas and the nonpizzas and owns the restaurant. He also owned its predecessor, the Bread and Salt that operated in Pittsburgh for all of 2015 plus a few weeks on either side. For a short-lived place, it got a lot of media attention, luring restaurant hunters and recipe gatherers from across the country.

By the start of 2016, he had decided to move to New York City. When his first job fell through, he began shopping for a location for Bread and Salt. The real estate market had ideas of its own, as it often does, which is how the incarnation of Bread and Salt that Mr. Easton opened early this summer wound up in New Jersey. In addition to cheaper rents, Jersey City has ordinances that allow customers to show up with bottles of wine or beer and drink them, a handy policy because Bread and Salt’s beverage list has nothing more potent than Italian sodas and sparkling water.

Each night’s menu, written in chalk on a blackboard next to the counter where you order, contains at least as many things that are not pizza as things that are. Generally these other items are modest in size and trattoria-ish in spirit; prepared ahead of time, they need at most five minutes in the oven before a cook will arrange them on a board and carry them to one of the 25 or so seats.

I wish the tripe stewed in spicy tomato sauce, the way Romans do it, were available all the time. It is not, but the meatballs almost always are, and they are wonderful, made with enough bread that they are extremely tender in a bright marinara. Another reliable find is a sandwich of some kind, made with plain, untopped pizza. Twice I’ve had a warm mortadella sandwich there, and both times I was convinced there was no way to improve on it.

One dish was denoted on the menu by a single word: beans. I’ve thought of it nearly every day since, partly because the beans — scarlet runners — were perfectly intact but perfectly tender; partly because of the brooding depth they took on from being finished with sweet red peppers that the kitchen dried and fried, an ingredient the Italians call peperoni cruschi; and partly because their broth tasted so good when given a chance to soak into the slice of thick-crusted sourdough bread that came on top. That bread is Mr. Easton’s, too. It comes with a lot of things, and it is excellent.

Bread and Salt is still settling into New Jersey. Some ingredients may be better when Mr. Easton has had time to infiltrate the local farm scene. In August, when the state was rolling in juicy peaches, he was serving crunchy unripe ones in red wine for dessert. There was also a very strange cantaloupe pudding. By September things were looking up; one day there was a scoop of Tristar strawberry sorbet served with anise-seed-flecked polenta gelato, both made by Superiority Burger. (Mr. Easton is friendly with that restaurant’s owner, Brooks Headley, and helped devise the recipe for the focaccia Superiority Burger serves on Fridays.)

Although Mr. Easton has a handful of employees, Bread and Salt has some of the blind spots of a one-person operation. It is not the easiest restaurant to communicate with, having an Instagram account but no website or phone. On a recent Sunday, when the restaurant was supposed to open at 1 p.m., a sign on the front door announced that it would be delayed until 1:30. That was the last communiqué; the doors were not unlocked until 2.

But Mr. Easton has a singular vision, and it is the reason the food is so compelling. Looking around at the place, you’re not sure how it can keep going like this. But then the plates start to come out of the kitchen and you don’t want them ever to stop.

FacebookshareGoogle+sharePinterestpin it
Pregnant Women Should Get Flu and Whooping Cough Shots, C.D.C. SaysMedical News Today: How does a vasectomy affect ejaculation?
Latest