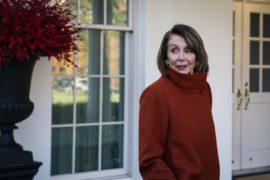 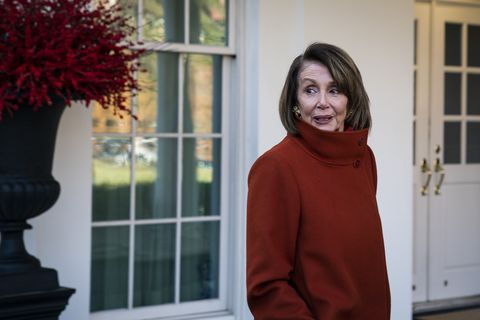 «Don’t characterize the strength that I bring.»

That’s a sentence uttered yesterday by likely Democratic House Majority Leader Nancy Pelosi during a bizarre televised meeting with President Donald Trump and her Senate counterpart, Chuck Schumer. During a tense discussion about funding for a border wall, Pelosi also insisted Trump have «evidence-based conversations» and gleefully dared him to shut down the government. As the Times wrote of the meeting, «For those who study women in politics, it was a notable moment — a behind-the-scenes peek at a powerful woman negotiating with the leader of the free world.»

After the heated exchange, Pelosi strode confidently away from the White House in sunglasses, pumps and a brick red MaxMara GLAMIS coat. Twitter, of course, loved it. That fearless gait! That autumn hue! That look of complete and utter «don’t fuck with me-ness.» Even award-winning filmmakers were into it.

Has anybody figured what coat this is she’s wearing? I waited to ask this question, let the seriousness of the situation be properly discussed but… that color is LEGIT and we need to know this👌🏿 https://t.co/hfF6IZL5Yg

«What I love about this coat is what it says about the supposed impotence of fashion,» Moonlight director Barry Jenkins tweeted. «From the asymmetrical front to the high collar, the strong yet unstrained shoulder and, of course, that COLOR — a deeply serene yet emphatic & ravishing color. This look kicks soooo much ass…And it kicked HIS ass.»

A coat is not going to stand up to your sexist colleague for you, or negotiate a raise on your behalf. A coat isn’t going to force the President of the United States to have «evidence-based» discussions and it’s certainly not going to keep the racist border wall from being funded. But if you think wearing a tomato red winter coat might make you feel even an ounce as powerful as Nancy Pelosi after a triumphant win, why the hell not. The original coat is from 2013, and according to MaxMara it won’t be available again until it’s «reinstated in a variety of colors» next year, but you can shop similar options below.