Beware the Evil Eye. Or Buy One, Just for Kicks 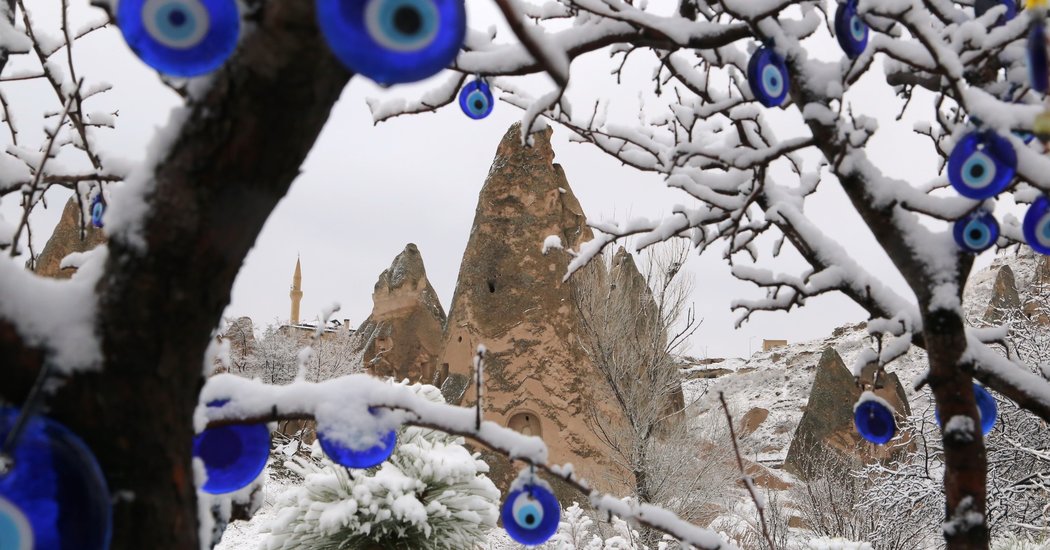 Search the phrase “evil eye jewelry” on Etsy, the e-commerce website for handmade and vintage items, and more than 71,000 items appear. It’s a staggering result, but not so surprising when you consider how many people, well, acknowledge the evil eye.

Throughout history, across cultures and religions around the world, people have feared the malevolent gaze of someone who envies another’s good fortune and wishes him harm.

Their defense? Charms like the evil-eye amulet, a bead or disc with a rendering of an eye — sometimes with a bright blue iris, sometimes with a black iris surrounded by circles of white and deep blue or aqua. Any visitor to the bazaars of Greece and Turkey or the shuks (covered markets) in Israel will be familiar with the myriad ways that those blue, white and black glass beads can be incorporated into necklaces, bracelets and other adornments.

And contemporary designers like Atelier Swarovski, Michael Kors and Alex and Ani have been rendering the evil eye in diamonds and sapphires, in gold and silver, creating pieces that appeal to modern tastes.

So the allure goes way beyond high school backpack charms or something for Coachella.

In fact, when Meghan, the Duchess of Sussex, was seen wearing an Alemdara evil-eye necklace and then a bracelet during her trip to Africa this fall — the latter (was it deliberate?) on the day when the public learned she had filed suit against a British newspaper for publishing a private letter — it became clear that the style had entered the fashion mainstream.

A Bit of History

The desire for protection against the evil eye is nothing new.

Amulets in the shape of idols with incised eyes made by the Mesopotamians were discovered during excavations in Syria and date to 3300 B.C. In “The Evil Eye: The Origins and Practices of Superstitions,” written in 1895, Frederick Elworthy said, “It is firmly believed by all ancients that some malignant influence darted from the eyes of envious or angry persons, and so infected the air as to penetrate and corrupt the bodies of both living creatures and inanimate objects.” (He also wrote of the ancient Egyptians and their use of the Eye of Osiris, one of their gods, in amulets to protect them against evil magic, both during life and in the afterlife.)

Belief in the evil eye is said to be strengthened among followers of Islam by verses 51 and 52 of the Al-Qalam Surah in the Quran: “And indeed, those who disbelieve would almost make you slip with their eyes when they hear the message, and they say: Indeed, he is mad. But it is not except a reminder to the worlds.”

And the Old Testament of the Bible refers to the evil eye in Proverbs 23:6, cautioning, “Eat thou not the bread of him that hath an evil eye, neither desire thou his dainty meats.”

Glass beads appeared in the Mediterranean in about 1500 B.C., as glass production became more sophisticated, and evil-eye beads became popular among the Phoenicians, Assyrians, Greeks, Romans and Ottomans. Many historians have theorized that, as dark-eyed people were the norm in the region, those with blue eyes were considered most skilled at using the evil eye, likely leading to the prominent use of blue in protective amulets.

But the evil eye also appeared in both Celtic and Polish folklores. “There is nothing more dreaded by the people, nor considered more deadly in its effects, than the Evil Eye,” Lady Jane Francesca Wilde (the playwright’s mother) wrote in her 1887 book, “Ancient Legends, Mystic Charms and Superstitions of Ireland.”

There is no way to quantify how many evil-eye amulets there are in world, but it is hard to dispute their popularity.

During Mariella Tandy’s first pregnancy, her Turkish mother-in-law gave her what she described as a “beautiful, historic” evil-eye bracelet. It became the inspiration for Alemdara, her fine jewelry e-commerce business, and its Didem bracelet, (275 pounds, or $355) is a reproduction.

“My girlfriends all loved her bracelet and asked me to please get them one,” Ms. Tandy said. “I couldn’t find anything but very cheaply made items, but my friends were still interested, so I thought I’d create bracelets for them and the business grew from there.”

Her customers range from age 2 to 94. They include 20-somethings who buy the jewelry, made by skilled Turkish artisans, as bridesmaids gifts and older women who choose them for pregnant friends.

“They’re often given during a happy time in life for best wishes and good luck,” said Ms. Tandy, adding that once the duchess wore her jewelry, sales grew 25 times compared with the same period last year. “A lot is made of the negative aspect, but in my experience, it has always been a happiness thing and an insurance policy, just in case.”

In Africa, the duchess’s choices were a turquoise version of the Didem bracelet and the Altan necklace (£450), which has both a small diamond pavé Hand of Hamsa and an evil-eye charm on an 18-karat gold chain.

In Toronto, Jessica Handelman, owner of the online fine jewelry site Jessica Jewellery, echoed the idea that evil-eye jewelry purchases from her line are increasingly fashion statements rather than responses to superstition. “Even a few years ago, the evil eye was more of a religious symbol that people wore for protection,” Ms. Handelman said. But “in the last two or three years, it has become more of a trend and a fashion statement than a meaningful symbol for a lot of my clientele.”

“I think it appeals to people because it’s unique and a pop of color,” she said. “The designs these days vary a lot and there are so many different ways to present an evil eye: an eye, a circle, and with or without lashes.”

Most of the women who buy her evil-eye pieces are 20 to 35, said Ms. Handelman, who, in a nod to Jewish tradition, has pinned a blue bead to her infant daughter’s stroller for protection.

Even the Aga Khan Museum gift shop in Toronto sells both evil-eye jewelry and evil-eye objects for the home. Shoheb Gwaduri, the shop’s senior retail operations manager and product development specialist, said Western customers “want the typical evil eye that doesn’t cost much to put on their luggage or wear as a fun thing. People from the Eastern world want something more elaborate or intellectual that they can discreetly bring into their home.”

For instance, the shop carries limited edition jewelry by Nadia Dajani, who is of Palestinian descent, and her pieces always contain one turquoise bead symbolizing the evil eye. “People often ask if it’s a mistake,” Mr. Gwaduri said.

Sabine Main, 46, a daughter of Lebanese emigrants to Canada, was given her first piece of evil-eye jewelry at her baptism. “It was a tradition in my family that when a child was baptized, she was given a gold necklace with charms and one was the evil eye,” she said. “They’re keepsakes and I’ll pass it along to my niece one day.”

She views them as symbols of religious belief and considers herself too pragmatic to wear an evil eye. But Ms. Main bought her sister what she described as a “super-trendy necklace with an evil eye” as a Christmas present recently because, she said, her sister is much more attached to tradition.

“I don’t truly believe an evil eye is going to protect me,” Ms Main said, “but when I see one, it definitely tugs on my heartstrings because it’s part of the culture.”

Helen Lasthiotakis, 57, is the daughter of Greek immigrants. Although she always knocks on wood when she praises someone, she said she had never worn an evil-eye ornament until last summer when her daughter, a graduate student, gave her a bracelet: “My daughter and I were each going through a rough patch, and she saw the bracelets on sale at the airport in Greece, so she got a couple and said we should each wear one.”

Ms. Lasthiotakis said she put the glass bead bracelet on her wrist and has not removed it.

“It’s not as if I’m an avid believer,” she said, displaying the bracelet. “It’s not something I would have bought for myself, but it’s protection channeled through my daughter’s love.”

It is not only women of a certain age who have evil-eye jewelry in their collections. Rachel Frydman, 29, received an evil-eye bracelet as a gift from a friend. The Toronto social worker, a grandchild of Holocaust survivors, said she is not superstitious about the piece, “but it is a very casual, noncommittal way to connect to Judaism and Jewish tradition.”

“I know that evil-eye jewelry is trendy and fashionable,” she said, “so I’m not surprised to hear that the Duchess of Sussex wears it.”

FacebookshareGoogle+sharePinterestpin it
The More (and More) the MerrierFor High Jewelry, a Multifaceted Future?
Latest