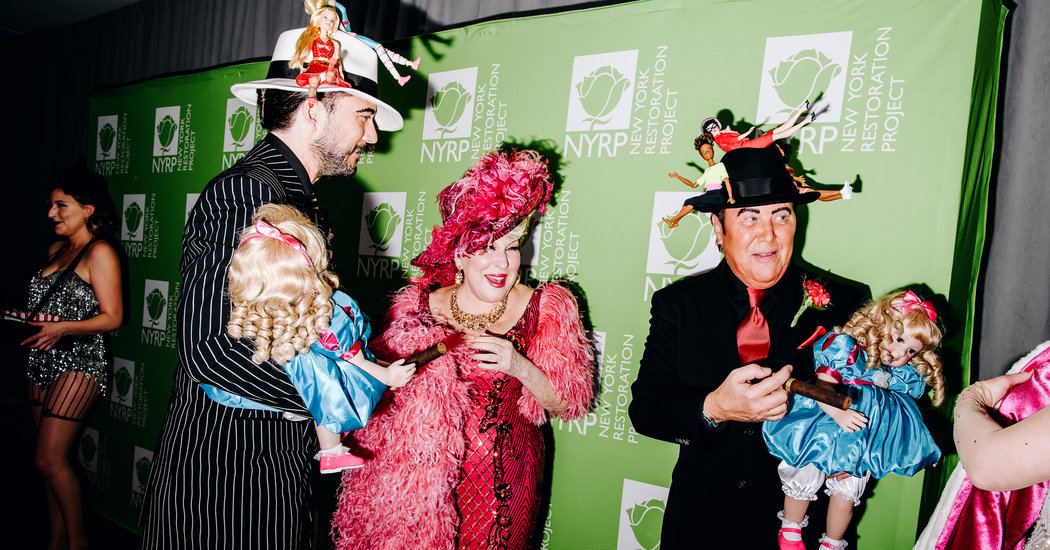 Leave it to actors to nail a Hollywood-themed Halloween party.

The dress code for Bette Midler’s annual Hulaween dinner, held last Thursday at the Hilton Midtown, was the golden age of cinema. And so Judith Light channeled Marlene Dietrich, Ben Platt and Beanie Feldstein were Tin Man and Dorothy from “The Wizard of Oz,” and David Hyde Pierce came as Cary Grant.

Not everyone got the memo. Wearing slightly off-theme costumes were: Katie Couric, who dressed as Elizabeth Holmes of the Theranos blood-testing scandal; New York State Senator Brad Hoylman, who went as Bill Cunningham, the eulogized fashion and society photographer for The New York Times; and Michael Kors, who wore a gangster outfit festooned with Barbies (“Guys and Dolls,” get it?).

Cyndi Lauper began the night as the Jazz Age actress Louise Brooks, sporting a large black chandelier headdress. Later she changed into a gorilla costume, before stripping down to Dietrichesque white-satin tails for a 30-minute set of her hits that brought 700 guests to their feet.

Ms. Midler spent the night vamping in red feathers as Mae West, as attendees dined on chicken potpie and baked alaska. Nearly $2 million was raised to benefit the New York Restoration Project, the nonprofit she founded in 1995 to green the city’s open spaces.

It seemed like a good opportunity to ask the celebrities if they have had any restoration done on themselves.

Ms. Midler said she restores herself by “getting up and dancing to ‘Papa Was a Rolling Stone,’ every day of my life — 30 minutes. You try and do it.”

Clive Davis, the music executive, came with Joan Collins, who was dressed as a ringmaster with a top hat, fascinator and riding crop. Are there any restoration projects she has considered?

Anthony W. Marx, the president of the New York Public Library, was trying to give a speech at the Library Lions gala on Monday night, but the 500 guests were making a ruckus.

Maybe it was the presence of Charlie Rose, the former television host fired by CBS and PBS amid #MeToo allegations, who was a topic of animated gossip.

So Mr. Marx did what countless librarians have done before in the Rose Main Reading Room; he issued a stern “Shhhh.”

There was a performance by Wynton Marsalis, and then medallions were presented to the night’s honorees: Elizabeth Alexander, the poet; Jill Lepore, the historian; Jamaica Kincaid, the novelist; and Frederick Wiseman, the documentary filmmaker. A fifth honoree, Philip Glass, the composer, did not attend because of ill health.

After dinner, some of the newly anointed Lions sheepishly admitted to having overdue library books.

“I get a bill every month” for late fines, Ms. Lepore said. “Mostly they’re lost books, and I’m convinced I’ll find them.”

Ms. Kincaid said: “I had to write an encomium for Elizabeth Alexander a few weeks ago, so I took out all her books from the Widener Library at Harvard, and they’re all overdue.”

Ms. Alexander, however, said she would feel too guilty to keep any overdue books, especially if they were by Ms. Kincaid, whose “gorgeous, lyrical voice,” she said, inspired her to start writing poetry.

FacebookshareGoogle+sharePinterestpin it
Thousands of College Kids Paid to Work for a Viral Party Kingpin. What Could Go Wrong?Is This the Store for Grown-Up VSCO Girls?
Latest