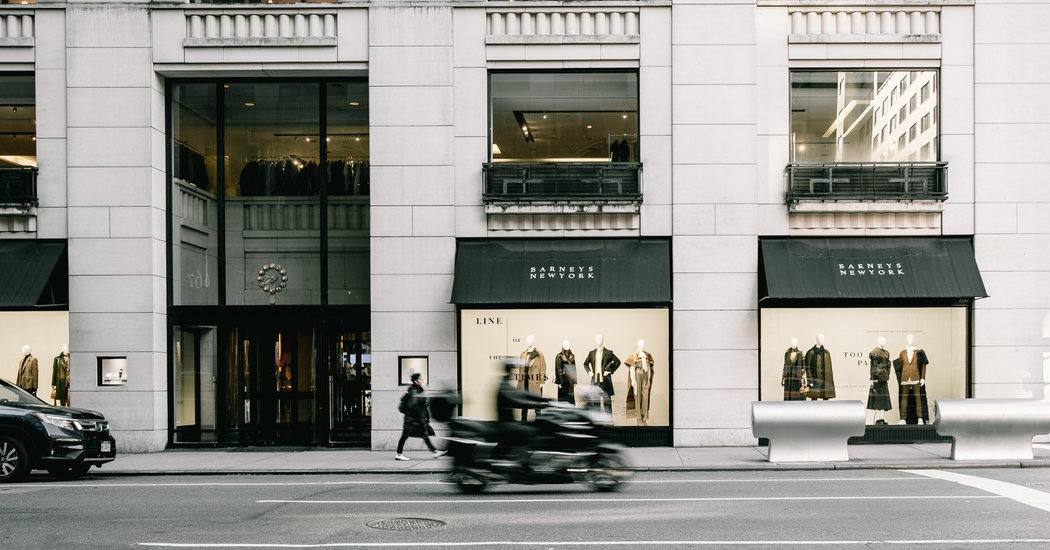 Days after Barneys New York was sold for pieces, the store-closing sales have started, with windows bearing signs that proclaim “Everything must be sold!” and in a smaller font: “Goodbuys, then goodbye!”

But a warning before you run out the door: It’s a very Barneys kind of sale.

You’ll find a Chloé bag for $1,690, or $85 off the pre-sale price. You could grab an Altuzarra sweater for $625.50, marked down from $695. Or you can wait and play chicken — the luxury retail version — with the liquidation specialists running the sales.

Shoppers wandered into the Barneys Madison Avenue flagship on Tuesday, asking salespeople about discounts on merchandise like handbags. Several left empty-handed after learning that the deals were currently in the range of 5 to 10 percent off and that wares from LVMH Moët Hennessy Louis Vuitton were excluded entirely.

The discounts should increase during the course of the sale “based on a somewhat mathematical, somewhat artful formula,” said Scott Carpenter, president of retail solutions at B. Riley Financial’s Great American Group, which is handling the sales.

Mr. Carpenter explained that the discounts account for the sales history of a particular item, and a sense of its desirability, and noted that this was a departure from other liquidations that his firm had overseen in recent memory, including Toys “R” Us and Payless Shoe Source.

The company hopes to sell the bulk of its luxury wares — from five full-price Barneys stores, two outlets and their corresponding websites — by the end of December but is prepared to run sales into February if necessary. Competing stores generally begin their holiday sales around Nov. 20, which gives Barneys a two-week lead on pocketbooks.

The beleaguered department store was sold in two parts in a $271 million deal: Its intellectual property went to the licensing firm Authentic Brands Group while its assets, including reams of designer shoes, tuxedos and coats, were bought by B. Riley.

Authentic Brands, whose plans for the brand include licensing it to Saks Fifth Avenue for shop-in-shops, might operate stores named Barneys in the future. However, Mr. Carpenter said his firm “will sell every stitch of product” in its current locations, shuttering Barneys as it is known today. As part of an agreement with Authentic Brands, the sales are being referred to as “store closing sales” rather than “going out of business” sales.

Executives at many of the high-end brands stocked at Barneys are holding their breath, hoping the sale is not too disruptive. Some are trying to buy back their merchandise. LVMH is the only vendor with an agreement that says its goods cannot be discounted, which it struck with Barneys after the retailer filed for bankruptcy in August, Mr. Carpenter said.

He added that LVMH, whose labels include Celine and Givenchy, even had the right to pull its goods entirely, though the luxury goods purveyor has not exercised that option. He noted that store closing sales often doubled store traffic, which can benefit even full-price brands.

Shoppers with store credit at Barneys will need to use it by Thursday, and returns will not be accepted after Nov. 15.

A sales associate at the store at Madison Avenue and 61st Street said on Tuesday that employees had lost their 60 percent-off discounts after Sunday and that they were anxious about what they would do for work after the liquidation. The associate, who asked not to be identified, citing fear of retribution, said staff members had not received answers to questions about future jobs with the Barneys label through Authentic Brands.

Mr. Carpenter said many of the associates earned commissions and, as a result, would make more money as the firm expected to “double the sales they would normally have had during this holiday period.”

When Barneys filed for bankruptcy, its biggest unsecured creditors included the Row, with a $3.7 million claim; Yves Saint Laurent, with a $2.2 million claim; and Balenciaga, with a $2.1 million claim. Others on the list were Celine, Gucci, Prada, Chloé and Azzedine Alaïa.

“We’ve been contacted by a number of vendors that want to buy their product back, but we haven’t made any agreements with any of them,” Mr. Carpenter said.

“We’re open to talking to them, but generally speaking, they want to buy their stuff back at a discount — I’d rather sell it to you at a discount,” he said. “Some have indicated they might just go into a store and buy the product if they want to do that.”

FacebookshareGoogle+sharePinterestpin it
Popeyes Sandwich Strikes a Chord for African-AmericansMedical News Today: How does the Mirena coil affect menopause?
Latest