Back to Basics for a Designer Whose Business Got Too Tight 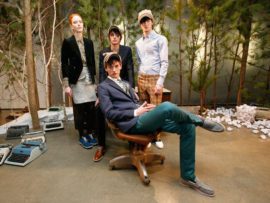 Scott Sternberg would prefer you not call him “quirky,” as has happened many times before. It’s “a word people like to use for me a lot,” Mr. Sternberg said, “which I don’t love.”

So we will not repeat the offense, further than to note that, while Mr. Sternberg may not be quirky, there he was, in all his Peter Panish youthfulness, with his penchant for stripy shirts and Polaroid film, seated in a geodesic dome of his own design as vintage monitors played the funny little videos he creates, ruminating about utopia.

If Mr. Sternberg has a quirk — let’s say for a minute that he does — it is for ginning up not just clothes (which he does) or videos (which he does) or even geodesic domes (which he has, for his label’s first-ever pop-up, in the SoHo branch of the furniture seller Design Within Reach), but also an entire world in which all of these things come together, with its own rhythms, cadence, colors and meticulously designed aesthetic.

Mr. Sternberg, 44, is what is usually called a fashion designer, insofar as he is in the business of making and selling clothes. If you know his name, it is most likely that you remember his former label Band of Outsiders, which, from 2004 to 2015, had a profound impact on the way stylish American men dressed, squeezing them into slim shirts and skinny ties and Sperry Top-Siders: prep-school style in quotation marks, self-aware and self-effacing.

Mr. Sternberg thinks of himself less as a designer or a creative director than as a world builder. He and Band of Outsiders parted company, and his new brand, Entireworld (aha!), is less exclusive and less niche; a collection, essentially, of basics. It is clothing considered from the bottom up — one if its founding garments was a pair of underpants.

Now with a few more staples to round it out, Mr. Sternberg hopes for nothing less than to dress the entire world. A year into its life, the question is: Can he?

The Entireworld world, a fantasyland in Disney colors (Disney World is an acknowledged influence), is a cheerful, welcoming one. Mr. Sternberg’s Band of Outsider tailored jackets could once run $1,800 or more; Entireworld’s T-shirts are $32.

Over a series of interviews beginning in April 2018, at its inception, and continuing through Entireworld’s first year, Mr. Sternberg explained his vision of this world and how it was built on the ashes of its predecessor. In so doing, he offered a view into the tectonic shifts in the fashion industry, the instability of the high-fashion, runway model he left behind and the traditional gatekeepers who perpetuate it.

Mr. Sternberg had been featured in every fashion magazine, won the industry’s top awards, hosted Anna Wintour and Kanye West at his fashion shows. Still, he said at a public conversation at Design Within Reach with Deborah Needleman (the former T Magazine editor), “the fashion system can feel like jail.” 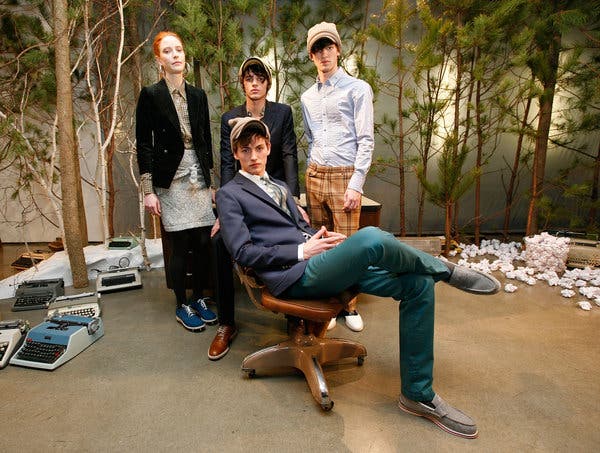 Looks from the Band Of Outsiders/Boy collection for fall 2010, shown in New York.CreditAmy Sussman/Getty Images

Band of Outsiders did $15 million in wholesale business its height, but Mr. Sternberg, overstretched and under-resourced, who sought and received investment, couldn’t keep up with the immense pressure to grow. He found out that his last hope for additional funding passed on the morning he opened the first Band of Outsiders shop in the United States, in SoHo. (The first-ever store had opened in Tokyo.)

He received a loan from CLCC, a Belgian fashion fund, for $2 million, but soon clashed with his new backers. Ultimately, Mr. Sternberg’s company defaulted on the loan and Mr. Sternberg himself walked away from the Band. CLCC assumed ownership, and Band of Outsiders continues without him, with a new design team in place. Mr. Sternberg called their first collection “a disaster.”

The challenges of designing and producing collection after collection of men’s and women’s wear are significant, and Band of Outsiders eventually grew to encompass several lines. The collections were well received but also vulnerable to the whims of trend and timeliness, and the vagaries of inconsistent production.

Even Band’s signature slim cuts were in part a self-fulfilling prophecy: After an initial run of shirts were (correctly) snug, other orders arrived from the factories in similar style. “Everything just came in a little bit small,” Mr. Sternberg said. “I’m not kidding.”

Band’s cuts — like those of Thom Browne, whose shrunken suits were a more conceptual foil to Mr. Sternberg’s easier Americana — helped convince curious young men to embrace a snugger silhouette. But that fit made democratizing and expanding the brand nearly impossible. In any case, high-fashion esotericism had never been Mr. Sternberg’s intention.

If fashion is by definition exclusive, Entireworld is inclusive; fashion segments the world into groups of like-minded (and like-dressed) cohorts, but everyone wears underwear. In a video announcing the creation of Entireworld last year, Mr. Sternberg faced the camera and, as his face dissolved into a montage of stylish men and women (Mick Jagger, Sade, The Dude), acknowledged his past failings and vowed to take a different tack.

“I started thinking about what it would be like to create something more democratic this time, without compromising anything about the design or quality,” he said. “About the stuff we live in every day.”

But now, instead of staging fashion shows and courting the fashion press, instead of depending on the patronage of department stores and boutiques, Mr. Sternberg’s Entireworld is sold primarily from its own website.

Mr. Sternberg runs the entire business out of a bland commercial office building in the Koreatown neighborhood of Los Angeles, from where he conjures a utopia only he can see. He is the man behind the curtain. Entireworld, and the thousand tiny windows onto it offered on Instagram posts and its cheeky, sunny website, is Oz.

Of course, the thing about Oz is that the man behind the curtain is pulling the levers, working to convince you to buy a $32 T-shirt from him, rather than a $10 three-pack from Hanes. He will tell you that his feels better, fits better and wears better; he will not be wrong.

But a basic is a basic, and to many, the difference is hard to parse. Mr. Sternberg is under pressure to make Entireworld so appealing that even its basics have ineffable magic that coaxes credits cards out of wallets.

Mr. Sternberg has to capture that market with less of the support he once enjoyed. “Have we captured the attention of traditional media outlets the way I expected to, the way I did at Band? Eh,” he said, giving a grunt of not-really. He has skipped the fashion shows and presentations he once staged. As a result, Entireworld has made a smaller splash.

But those who love it — those who may be rising to replace the old gatekeepers — have vouched for it. “Basically have not taken this sweatshirt off since I got it last week,” Leandra Medine, better known as the Man Repeller, posted to her Instagram not long after the label’s debut.

“It was definitely something we had never done,” said Kim Phillips, the head of public relations and events for Design Within Reach. “It was sticking my neck out there for sure.”

To start Entireworld, Mr. Sternberg raised $1.5 million from a group of private investors, and he has sought further investment to grow and scale it. Within its first year, he said, the company has sold more than three quarters of its initial inventory and reached more than $1 million in sales without paying for any advertising.

Numbers like these, while impressive, mean Entireworld is dwarfed by many of its competitors, limited by finite capital but not in an ideal position to attract more. “There’s a real disconnect,” Mr. Sternberg said, between his values and the goals of the investors he is hoping to attract.

“Investors want a return, and they want a return in a certain amount of time,” he said. “I understand all these things, clearly, but they still don’t change my view that sticking to my guns in terms of what this is and what it should be shouldn’t bow too much to the pressure of what investors think it should be right now.”

And while the signs have been good — Ms. Phillips said that she and Mr. Sternberg were talking about the pop-up traveling to other Design Within Reach locations, and sales continue to climb online — the economic reality of keeping a fashion business afloat is a chilly reality intruding into utopia. The world isn’t Entireworld, yet. But Mr. Sternberg said there had been no question of not trying his hand in the rag trade again.

“Unfortunately not,” he said with a laugh. “I am an entrepreneur by birth. I am at my most ebullient, excited, energetic when there’s a big challenge and a huge bucket that needs these ideas to fill it out. It’s painful. It’s not easy. There’s just this unexplainable, probably illogical urge to do this stuff.”