At the New Orleans Airport, a Taste of Leah Chase’s Food and Art 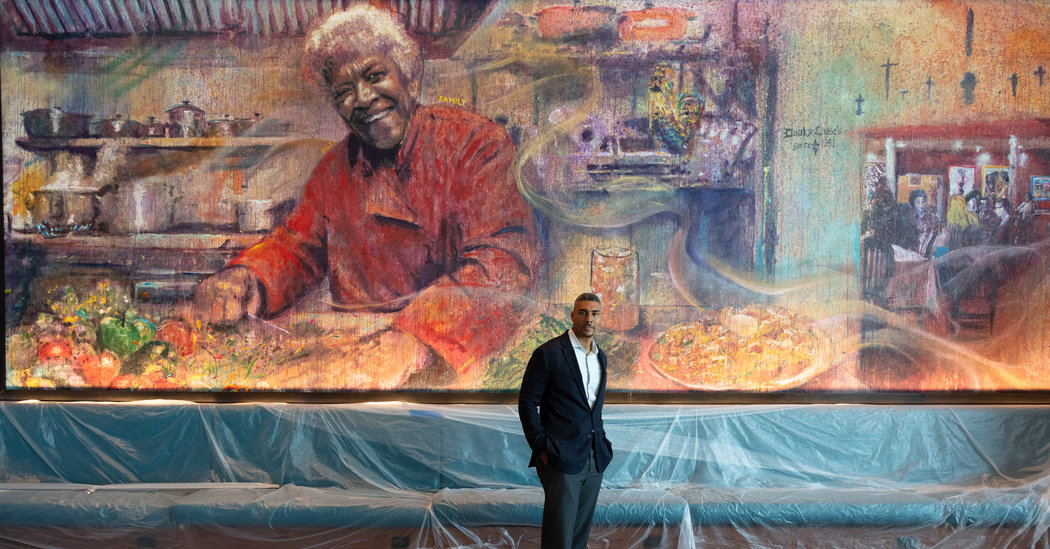 The food and art favored by Leah Chase, who was the nation’s pre-eminent Creole chef when she died in June at age 96, will live on in a restaurant that members of her family and an international hospitality group plan to open as soon as November inside the new billion-dollar terminal of Louis Armstrong New Orleans International Airport.

The idea of memorializing Ms. Chase with an airport restaurant isn’t that much of a stretch. At the New Orleans airport in 2013, the Chase family and the hospitality group, Delaware North, opened an outpost of Dooky Chase’s, the restaurant she and her husband, Edgar Dooky Chase II, ran for more than half a century in the city’s Treme neighborhood.

That outpost will close along with the old terminal this fall, although the exact date is a moving target. The new restaurant, which Ms. Chase’s family says she approved before she died, will be named Leah’s Kitchen.

Her grandson, Edgar Chase IV, grew up working at her original restaurant. After Hurricane Katrina hit in 2005, floodwaters closed Dooky Chase’s for 18 months. Ms. Chase sent him to study at Le Cordon Bleu in Paris. He returned and worked with her in the kitchen until he opened Dooky Chase’s in the airport and, later, another concession there, Dook’s Place.

“She was able to see everything in concept, but not in finished product,” said Mr. Chase, 37, who will oversee the new restaurant. “We talked about how this is a way to tell your story not only through food but through her art collection.”

He will serve his grandmother’s greatest hits, including fried chicken, shrimp Creole and gumbo, and add other New Orleans classics like oysters Rockefeller and barbecued shrimp.

The restaurant will display several pieces of art commemorating Ms. Chase’s life, including a 30-foot-long mural that pays homage to her skills as a cook and a curator of work by African-American artists.

Leah’s Kitchen is part of a larger plan to upgrade restaurant offerings at an airport that has long been considered a dismal reflection of a great food city.

Several of New Orleans’s most beloved names have become partners with Delaware North and will serve food in the new terminal, including John Folse, a Cajun and Creole chef who long cooked alongside Ms. Chase at community events; MoPho, which takes its influences from the city’s Vietnamese culture; and Angelo Brocato, which has been serving gelato since 1905.

“We dug in really heavy to the culinary culture of New Orleans,” said Vito Buscemi, a vice president of Delaware North.

Leah’s Kitchen will be front and center, the mural and the smell of gumbo greeting millions of travelers as soon as they pass the security checkpoint on their way to the gates.

“This was an opportunity to honor my grandmother and grow the brand,” Mr. Chase said. “If you know my family, there a lot of us, and most of us love to be in the restaurant business. It’s hard to sustain ourselves trying to just work at Dooky’s.”