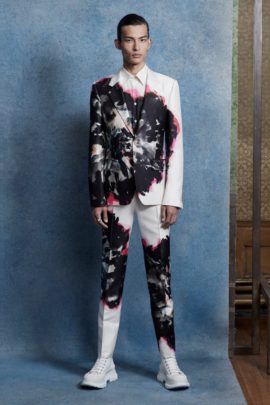 LONDON — Britain may be a divided nation, with no resolution to Brexit in sight, but the country’s multi-billion-dollar fashion industry cannot afford to grind to a halt. A handful of designers worked out their political angst on the catwalk at London Fashion Week Men’s this season.

For most, however, it was business as usual, and the results were three days of collections that offered some real bright spots during a time filled with shades of gray. Here’s why.

Alexander McQueen is one of the best-known British names in fashion, yet the brand rarely shows in London. This season, however, the creative director Sarah Burton chose to present her spring 2020 collection at home. More specifically: inside the very English surroundings of Charterhouse, a 14th-century building complex in Clerkenwell near the McQueen headquarters.

Many of the 31 looks echoed the fall 2019 women’s wear looks shown at Paris Fashion Week in March. The aim? To create a strong dialogue between the men’s and women’s wear. See traditional tailoring with an inventive twist, and heritage fabrics largely sourced from the mills of Northern England.

There were double-layered pinstriped jackets, belted and studded leather overcoats, and woolen pleated half-skirts layered over ankle-skimming pants, a throwback to a favorite 1990s McQueen signature. Shots of fuchsia and blood red cut through the dark, and hand-painted roses bloomed on sleeves, legs and shirting. 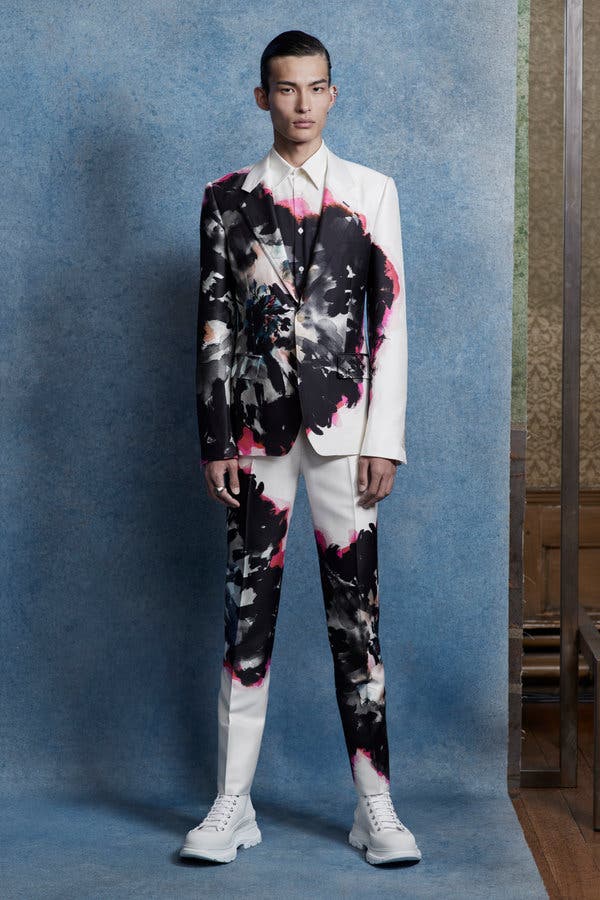 Men’s wear is a fast-growing category for McQueen, accounting for roughly 30 percent of the business, according to the company. Kering, its parent group, believes it can be an even bigger part of the brand. This slick collection gave substance to that strategy.

Charles Jeffrey has become a poster boy for the London scene, nominated for the LVMH prize and lauded for his dramatic gender-blending collections that marry a couturier’s touch with underground cool.

But with the spotlight has come scrutiny, and calls for greater commercial as well as creative consideration. Among the glass-towered book stacks of the British Library on Saturday, the young Scot (whose Loverboy show in January had been inspired by a first edition of “The Story of Peter Pan”) sought to show he had begun to grow up.

He did it in three acts, each introduced with a poetry reading and on a catwalk shorn of the usual theatrics, that revealed his most disciplined designs to date: black seersucker tailoring with a military bent, splashed with color; punk tartans; and capes finished in wild, ethereal prints.

The clothes were wearable, with a clear design signature and defiant message, though they lacked some of the flamboyant glory that first defined Mr. Jeffrey’s work.

Also getting down to business was Edward Crutchley, Kim Jones’s right-hand man. This season he explored “nostalgia without being nostalgic,” particularly for bourgeois Britain in the 1980s and ’90s.

Nicholas Daley often infuses music into his presentations. His parents ran a reggae club in the 1980s, and Mr. Daley’s half-Jamaican, half-Scottish heritage has long served as the DNA of his namesake label, which colorfully explores subcultures.

“Astroblack” took place inside the St. Mary-at-Hill church, hidden down a city back street with a large organ and burning incense sticks. First, musicians from the jazz band Sons of Kemet played themselves down the runway wearing pinstripe pants, string tops and sleeveless vests in oranges and ochres with knitted beanie hats.

Then came models in oversize checked shorts and coats printed with Irish linen mills, tie-dyed shirts from Kyoto and denim Baker Boy hats produced by the British milliner Christys. To close, the musicians performed a jubilant jam session that had models and guests jumping up and down.

Hussein Chalayan also turned up the volume, exploring how ethnic dance has been subsumed by Western occupation. Models clutched small vintage boomboxes as they walked down a pedestrianized Mayfair street. A breezy silhouette mimicked a body in movement, so a belted pinstripe suit was paired with billowing pants, and there was an abundance of boxy summer stripes and oversize cotton shirts, some complete with dance instructions and many finished with snaps, buckles and even hiking poles to prepare for moving onward.

And then there was Martine Rose, who has made a signature out of using the base materials of everyday street life (chav sportswear, office drab) to underpin her collections. This season expanded that population to include the ’80s club kid, skinhead, new romantic and after-office raver.

The point, Ms. Rose said, was that living when discord in Britain has reached new highs, “We need to learn to coexist.”

And questions were raised.

Samuel Ross, the latest recipient of the Fashion Award’s British Emerging Men’s Wear Designer prize, examined what he called “the scaffolds of society.”

In the rain-soaked depths of southeast London, his A-Cold-Wall collection brought a new and refined finish to luxury street wear separates. Anoraks, macs and jackets in chalky grays and earthy browns were paneled and pocketed with graphic precision, sometimes layered with harnesses to keep the wearer upright.

Mr. Ross is already one of the most hyped names on the London fashion scene, and after the show he went on to win the BFC/GQ Designer Menswear Fund, awarded on Monday night.

“I was thinking about scrutinizing your own reflection and self-study in mirrors,” Mr. Green said backstage. A series of boxy paneled leather looks opened the show, followed by luxe quilted suits, wafer-thin second-skin cutout looks inspired by Mexican lanterns, and finally signature uniform staples with photo prints reminiscent of a male anatomical sketch.

“It was a more positive show than normal,» Mr. Green said. “Almost celebratory in fact.”

FacebookshareGoogle+sharePinterestpin it
A Taste of the MastersHas SoHo Become One Big Wellness Pop-Up?
Latest