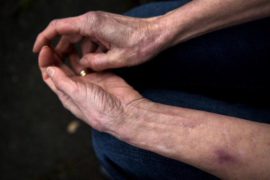 She’d been told that childbirth was going to be painful. But as the hours wore on, nothing bothered her — even without an epidural.

“I could feel that my body was changing, but it didn’t hurt me,” recalled the woman, Jo Cameron, who is now 71. She likened it to “a tickle.” Later, she would tell prospective mothers, “Don’t worry, it’s not as bad as people say it is.”

It was only recently — more than four decades later — that she learned her friends were not exaggerating.

Rather, there was something different about the way her body experienced pain: For the most part, it didn’t.

Scientists believe they now understand why. In a paper published Thursday in The British Journal of Anaesthesia, researchers attributed Ms. Cameron’s virtually pain-free life to a mutation in a previously unidentified gene. The hope, they say, is that the finding could eventually contribute to the development of a novel pain treatment. They believe this mutation may also be connected to why Ms. Cameron has felt little anxiety or fear throughout her life and why her body heals quickly.

“We’ve never come across a patient like this,” said John Wood, the head of the Molecular Nociception Group at University College London.

Scientists have been documenting case studies of individuals who experience little or no pain for nearly 100 years. But the genetic mutation that seems to be responsible for Ms. Cameron’s virtual painlessness had not been previously identified.

The study emerged amid major developments in the emotionally charged debate over how to responsibly treat pain. On Thursday, New York State filed one of the most sweeping legal cases yet against the Sackler family, which owns Purdue Pharma, the maker of the opioid OxyContin.

And it was yet another reminder that we need less addictive alternatives for chronic pain, said Dr. Stephen G. Waxman, a neurologist at Yale and the author of “Chasing Men on Fire: The Story of the Search for a Pain Gene.” Dr. Waxman was not involved in the recent paper but he also studies people who have rare mutations that alter their experience of pain.

“Each of these mutations teach us something, and point to a particular gene as a potential target for new and more effective pain medications,” he said.

• It Looked Like a Beer Belly. It Turned Out He Had a 77-Pound Tumor.

• When the Illness Is a Mystery, Patients Turn to These Detectives

The sequence of events that led scientists to investigate Ms. Cameron’s genes began about five years ago. She was living a happy, ordinary life on the banks of Loch Ness in Scotland with her husband, she said. After a hand operation, a doctor seemed perplexed that she was not experiencing any pain and did not want painkillers.

“I guarantee I won’t need anything,” Ms. Cameron recalled telling Dr. Devjit Srivastava, a consultant in anesthesia and pain medicine at a National Health Service hospital in northern Scotland and one of the authors of the paper. 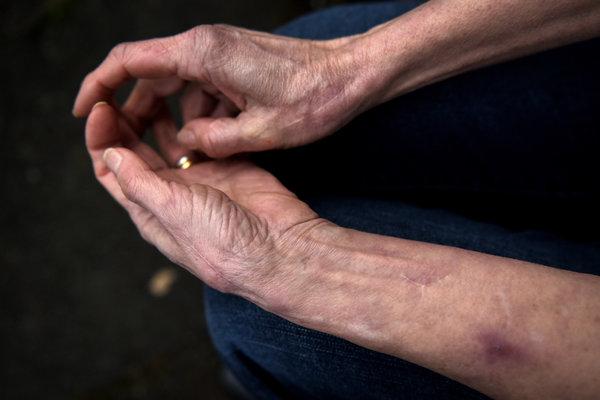 Because she doesn’t feel pain, Ms. Cameron burns herself quite frequently. The scars tend to go away quickly, she said, something else scientists are planning to investigate.CreditMary Turner for The New York Times

A few follow-up questions revealed that Ms. Cameron was unusual. At 65, she’d needed to have her hip replaced. Because it had not caused her pain, she had not noticed anything was amiss until it was severely degenerated. Cuts, burns, fractures — these did not hurt either. In fact, it often took the smell of burning flesh or her husband identifying blood for her to notice something wrong. She also reported that eating Scotch bonnet chili peppers left only a “pleasant glow.”

Dr. Srivastava referred her to University College London’s Molecular Nociception Group, a team focused on genetic approaches to understanding the biology of pain and touch. They had some clues for her. In recent decades, scientists have identified dozens of other people who process pain in unusual ways. But when Dr. James Cox, a senior lecturer with that group and another author of the new paper, inspected her genetic profile, it did not resemble that of others known to live without pain.

Eventually he found what he was looking for on a gene the scientists call FAAH-OUT. All of us have this gene. But in Ms. Cameron’s, “the patient has a deletion that removes the front of the gene,” he said. Additional blood work confirmed this hypothesis, he said.

Ms. Cameron said she had been shocked by the interest in her case. Until her conversation with Dr. Srivastava, pain was not something she thought about. Perhaps it helped that even though she burned and cut herself quite often, her injuries rarely left scars — something else that scientists believe is connected to the mutation.

[Sign up for the Well newsletter to get the latest on health, fitness and nutrition delivered to your inbox weekly.]

A number of articles have been written about parents of children with similar conditions. Many live in fear that without pain, their children won’t learn how to avoid hurting themselves. Her parents never made it an issue, she said. She suspects this may be because she inherited the mutation from her father.

“I can’t remember him needing any painkillers,” she said. “I think that’s why I didn’t find it odd.”

Unfortunately, because he died before the discovery, it will remain unknown whether he carried the mutation. Her mother does not share it. Neither does her daughter. Her son “has the same microdeletion in FAAH-OUT, but does not have the other mutation that confers reduced FAAH function,” Dr. Cox said.

In other words, her son shares some, but not all, of her pain insensitivity.

Scientists are also intrigued by Ms. Cameron’s extraordinarily low anxiety level. On an anxiety disorder questionnaire, she scored zero out of 21. She cannot recall ever having felt depressed or scared.

In retrospect, she sees how her genetic disposition may have aided her at work. After years as a primary-school teacher, she retrained to work with people with severe mental disabilities. Erratic, aggressive behavior never riled her, she said.

But though having this mutation may sound like a dream, there are downsides. One is that she is quite forgetful; prone to losing her keys and her train of thought midsentence. The other is that she’s never felt the “adrenaline rush” that other people talk about, she said.

The researchers said they would now focus on trying to better understand how FAAH-OUT works so that they can design a gene therapy or other pain intervention around it. Turning a discovery of this sort into an actual pain or anxiety treatment requires many steps, many years and many millions of dollars. It’s rare for a product to emerge.

But it’s not unprecedented, Dr. Waxman said. As a reminder of how an individual with an unusual genetic makeup can shape the future of medicine, he pointed to statin drugs.

“They were developed largely on the basis and discovery of incredibly rare families where everyone was having heart attacks in their 20s,” he said. Whether it will be Ms. Cameron’s mutation or another individual’s mutation that directs the future of painkillers, it’s too early to say.

“But I’m reasonably confident that the lessons we are learning from the genes involved in pain will lead to the development of an entirely new class of pain medications,” he said.

FacebookshareGoogle+sharePinterestpin it
20 Unique Mother’s Day Gifts for Cool Moms, Not Regular MomsHungry City: Churrasco That Rises Above at Paladar in East Harlem
Latest