As Manhattan’s Chinatown Changes, Food Vendors Keep a Bit of the Old With the New 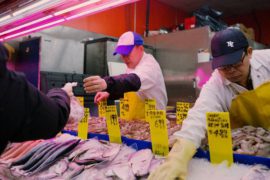 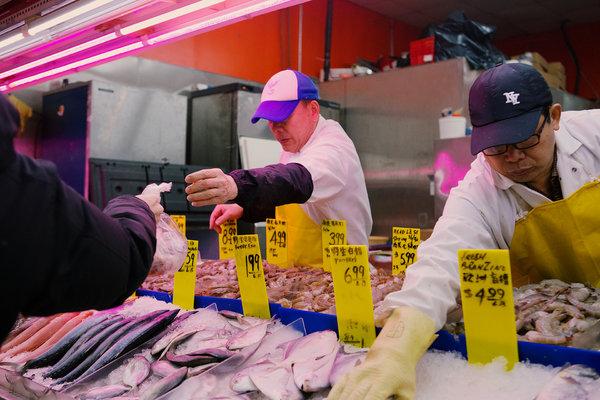 Though an Asian grocery is near the author’s apartment, she says she still goes to Chinatown for the range of foods and the bustle and energy of the neighborhood. CreditMary Inhea Kang for The New York Times

Even when I lived hours away, Manhattan’s Chinatown was my family’s destination for groceries. Decades back, you couldn’t find the same variety and quality of Chinese produce, meats and dried goods in most of the Mid-Atlantic.

Cheaper options in Flushing, Queens; Sunset Park, Brooklyn; and elsewhere in the city have drawn working-class Chinese immigrants away from this neighborhood bordered by trendy SoHo and TriBeCa.

As Chinatown’s population changes, what will happen to the grocers and specialty food stores that feed the community?

“One of the reasons Chinese in our neighborhood have been able to sustain our community nutritionally is because these vendors exist,” said Jan Lee, a Chinatown resident and property owner in the neighborhood. “For gentrification, people think it’ll be $8 coffee, but before that happens you’ll displace a fishmonger or a fruit seller who is providing inexpensive food.”

For several years, Chinatown has helped teach my third-generation American children what it means to be Taiwanese-American, not only because they go to Mandarin school there, but also because, just as importantly, they eat the foods, foods that aren’t pristine and sterilized, boneless and skinned.

I spoke to some food shopkeepers, who ran first- and second-generation family businesses in Chinatown. Their answers both surprised and inspired me and suggested that while some see a neighborhood in decline, others see merely a transition.

Lewis Wu from Hong Kong Supermarket says the store expanded its selection of dairy products to serve both non-Chinese and Chinese customers. CreditMary Inhea Kang for The New York Times

After immigrating from Burma, Lewis Wu’s father opened his first store in 1973, a small dry goods grocery on East Broadway in Chinatown.

Business was brisk, especially on Chinese New Year’s. “It was actually like a can of sardines.” Mr. Wu reminisced, “long lines throughout the whole day.”

And Mr. Wu loved it. Choosing products and seeing what sells at what price was like running little experiments for him.

So while his sisters went into medicine and dentistry, he chose the family business.

With two floors and 17,000 square feet, Hong Kong Supermarket is one of the largest in Chinatown and larger than most grocery stores in Manhattan: The store has several tanks for live fish and shellfish, a butcher section, a back wall entirely for frozen goods, and a lower level for kitchenware, herbs, rice and noodles.

Just a few years ago, Hong Kong Supermarket expanded its selection of non-Asian products, like yogurts and cold cuts, though Mr. Wu explained that it wasn’t just non-Chinese customers who had asked for it.

“Like dinosaurs,” said Mr. Wu, “if you don’t change with the environment, you won’t be here.”

But he added that despite the relative higher rent in Chinatown, the volume of sales at the Hester Street store still made it the most profitable.

Muoi Truong says the busiest time is the weekend, when people from all over the metro area come to Chinatown to shop.CreditMary Inhea Kang for The New York Times

On a recent December afternoon, Muoi Truong could be found wearing six layers of clothing and three hats.

In front of her was a rainbow of fruit from the tropics — pink-red lychees, ruby rambutans, yellow mangos, pale green Taiwanese guava and fuchsia dragon fruit — sitting atop three tables on the sidewalk of Mulberry Street near Canal.

One shopper considered a box of strawberries and asked, “Is it sweet?”

Karlin Chan, a community activist in Chinatown, introduced me to Ms. Truong, who has sold fruit with her husband for over 20 years at this location. Her sister and brother run a similar stand around the corner farther east on Canal.

But she says her business has declined, and standing all day has started to wear on her. She pointed to her bowed legs and said her knees had been bothering her.

Would she want one of her four children to continue the business? “Of course not, I’m hoping they’ll go to medical school!” she said. Her two oldest are in college, at Columbia University and the University of Richmond.

My 80-something-year-old uncle in Missouri said that before he died, he would love to be able to eat cherimoya, a Southeast Asian fruit related to the soursop, just one more time. We sent one from Ms. Truong.

Paul Eng really wants to appeal to everybody.

His new shop will offer riffs on Asian foods to attract younger customers who are into the “snacking, foodie culture,” basically, quick bites, usually novel and Instagram-able, that could be sweet or savory.

“I still want to serve the community,” Mr. Eng said.

Though Mr. Eng has a family history in the tofu business (his father owned Fong Inn Too on Mott Street, the oldest tofu and noodle shop in the city), this new store is a somewhat surprising turn for him.

He had long disliked working at his family’s store. “Any little thing that needed attending to, it had to be done right away, seven days a week,” said Mr. Eng, who was the youngest child.

So a few years ago, when his parents and older brothers asked if he wanted to take over the business, he had no interest.

Now though, at 51 with two young children, Mr. Eng is looking for a steady job instead of freelance photography. He had spent 10 years as a commercial photographer in Russia, where he met his wife.

But unlike the original shop owned by his father, the new shop will serve foods like soy custards topped with red and mung beans, boba or grass jelly, a combination he was introduced to while visiting Taiwan.

“Who knew?” Mr. Eng’s eyes brightened. “I’ve eaten all this stuff in separate parts my whole life, but together? Oh my God!”

The name will still be 宏安, this time transliterated as Fong On.

“I’m going to put everything that I know into it,” Mr. Eng added. “The photography, the marketing, the art direction.”

I asked Mr. Eng what his father, who has died, would say about his return to the tofu business after so many years of resistance. His answer: “I told you so.” 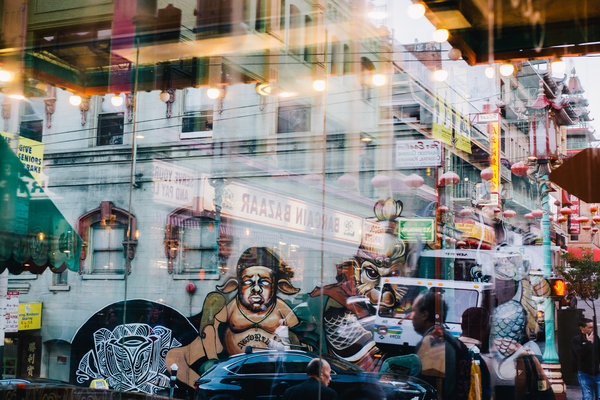 A New Destination for Chinese Food: Not Flushing, but Forest Hills 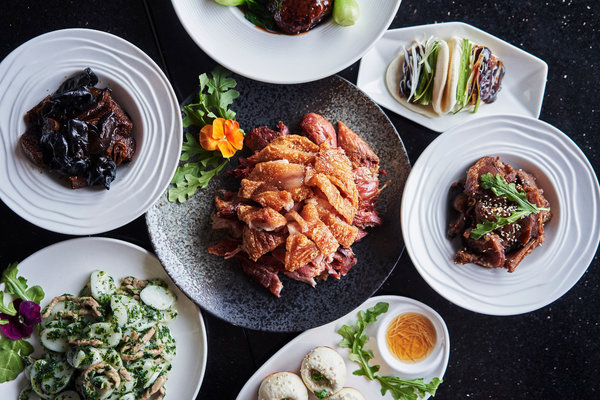 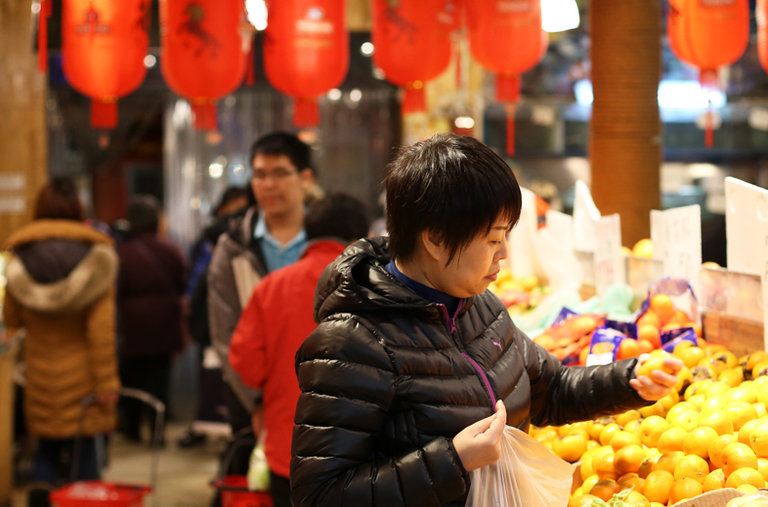 Freeman Wong isn’t sentimental about the neighborhood’s shift. “Times change,» he said. «I remember when Chinatown was much smaller.” CreditMary Inhea Kang for The New York Times

The customers, and even the vendors, call her “Mommy.”

Though she’s not in charge anymore, Zee Ying Wong, 73, manages the register at Aqua Best and enjoys chats with longtime customers.

“It would be boring to stay home,” she said.

About 30 years ago, after Ms. Wong’s husband passed away, she built up the current business, now managed by her two sons, Freeman, 42, and Steven Wong, 39, along with other family members.

But she still comes every day “to point out the things they should pay attention to and how to solve problems,” she added.

One entire wall of this spacious store is occupied by glass tanks, filled with barramundi, spotted shrimp, whelk, Dungeness crabs, King crabs and lobsters. In the center are trays of razor clams and other shellfish next to several types of iced fish, and a bucket of frogs near the back (so as not to scare the non-Chinese customers, Steven Wong explained).

Freeman Wong spent 10 years in the finance industry. But when his job required a move to Ohio, he decided in 2004 to dedicate himself full time to Aqua Best.

“I needed a little bit of time to figure out what I wanted to do,” he said.

The business and its block have changed a lot since then. Its neighbors used to be a handful of other Chinese-owned seafood shops, now replaced by an ice cream shop and a Vietnamese restaurant among others.

And wholesale makes up 90 percent of its revenue now, with restaurant clients like Blanca and Del Posto, along with nearby Chinese restaurants.

Steven and Freeman Wong have partnered with a former executive chef from the restaurant Talde to open a seafood market and restaurant called Essex Pearl. It’ll be ready next spring at the new Essex Crossing, an enormous development on the Lower East Side.

The menu won’t be strictly Chinese, but rather a mix of Jewish, Hispanic, and Asian cuisines, a homage to the neighborhood’s history.

Freeman Wong said, “The second and third generation, we’re bringing our own ideas of what Chinatown should be.”