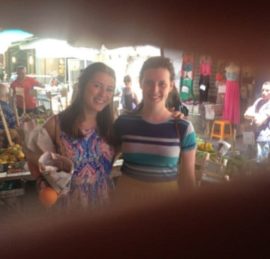 Natalie Beach, a writer who helped her college friend Caroline Calloway create a healthy Instagram following by telling these stories, made that process explicit this week. In an essay published on Tuesday by The Cut, Ms. Beach explained how she and Ms. Calloway had together created a persona for Ms. Calloway’s Instagram account, until their working relationship became untenable.

[Who is Caroline Calloway? Here, we can explain.]

Now, that has become the story to tell. “The piece is about the perils of creating a version of yourself online, and now I’ve done just that,” Ms. Beach, 27, said in an interview by phone on Wednesday.

She said that though the essay had provided Ms. Calloway and herself with a surge of followers, it had not been coordinated between them. She talked at length about their relationship, and addressed some of the questions about her story that have arisen among readers.

I’m interested in the essay’s conception. It’s so crafted. It reads like it could be in a novel or at least in a memoir written by a novelist.

I had been working on this essay for six months. But really the moment I met Caroline, she was already such a literary figure that it’s really sort of been in process for seven years. Also because my job became writing the character of herself, and sometimes writing the character of me interacting with her. So there’s many layers of fictionalization within this true story.

When I think abut it, the real impetus was trying to reclaim my own perspective in a narrative where I was very intentionally pushed to the sides of it. I think about Lorrie Moore’s “People Like That Are the Only People Here,” where it’s technically fiction but it’s inspired by true-life experiences and it just feels like this very angry reclamation of personhood in the medical establishment.

How did the essay come into being? Did you pitch The Cut?

I did. I have had really complicated feelings about whether or not to write about this because it’s a lot of vulnerability that I still feel about the way I acted. I feel embarrassed and ashamed about how small I made myself at times in that relationship and also my own manipulation. And even though the effort of the piece was to tell my story, of course Caroline is still a huge part of it and right now she is completely in the public eye because of this.

It took me a long time to make the decision to start writing about it, and I can’t really point to one key moment where everything changed. But in January when the creativity tour happened, she started becoming a bigger and bigger public figure and she began speaking openly about her Adderall use and her mental health.

And I felt that because she was living publicly and branding herself and making money off being public in this way and also speaking openly about things, I wouldn’t be outing her.

She was back in the news telling the story of her life, and I’m not mad at her for not talking about me, I actually very explicitly told her not to but I suddenly felt like, “Wait a minute, I have a story to tell, and I can tell it.”

Have you been approached by agents and by editors who are interested in that story?

My inbox is pretty full right now. I’m a little overwhelmed with sort of a tidal wave of attention. But I’m just trying to take it really slow. This is the first time I’ve really put myself out there as a writer publicly. I used to write about books for Oprah magazine, but this is not the same thing.

I studied screenwriting at N.Y.U., and I prefer that kind of writing because I like the collaborative process. I worked really hard at memoir, and I went to a great creative writing arts school called the Educational Center for the arts in New Haven and I loved writing memoir.

But I just came to this realization that you have to sell off parts of yourself and you have to sell out your friends and your loved ones if you want to make a career off of that. I think that this isn’t the end for me in memoir writing, but I don’t want to build my life around having to dissect myself on a daily basis.

That brings me to an obvious question. You’re probably getting a lot of two different kinds of email, the first thanking you for writing something so relatable and profound, and the second asking “How dare you, you treacherous [expletive]?” basically. How are you reconciling that rush of positive attention and that rush of negative attention?

It’s an ongoing process for sure. I am very aware of movements like Gamergate and the hatred that women of color, especially, face, so I by no means am feeling like I’m the true victim of the internet right now.

I’ve gotten a few emails that have been polite but pretty firm about their feelings that I was wrong for talking explicitly about Caroline’s struggles with mental health. I guess my feeling about that is that there’s a part of me that agrees with them. That’s why I was so divided about whether or not to write this in the first place.

And the reason I did was because I thought that she was so public about it herself that I wasn’t revealing any horrible secret. More of it got cut later on, but I’ve been in therapy, I’m on antidepressants, I talk about my own assault here.

And I felt that by being raw personally it sort of creates this understanding that we’re all dealing with our own problems and that’s not a dirty secret.

We have things like this owner of a pencil store wondering what pencil store exactly you worked at. Another person is cross-referencing old Minetta Tavern menus with your account. How do you address people questioning you on the facts? Did you not set out to write something that was purely journalistic, or is there some other explanation of those things?

Well, my explanation for the menu of the Minetta Tavern — and this is the first I’m hearing about it — is that I was incredibly drunk that night. And it’s very possible that I confused the pasta dish.

[Ms. Beach texted the morning after the interview to say that she had gotten the Minetta Tavern and the Waverly Inn confused. “I was very drunk at the Waverly,” she wrote. “The Minetta was just (sober) lunch, and I based that description off notes from my diary. It was a really long time ago though and of course it’s possible I mixed up the exact appetizer we ate.”]

As for the pencil controversy, I worked at Shorthand, which is a letterpress/stationery store in Los Angeles. I love Shorthand and they were great for me. Everything with Caroline fell apart and I needed a job, and they hired me off the street.

[Rosanna Kvernmo, the owner of Shorthand, confirmed that Ms. Beach had worked there in early 2017 and that the store sells pencils.]

I think that CWPencil, who I know through the pencil community, just misread the piece and thought that I worked at the pencil store in New York when actually I worked there in L.A. If I was trying to be more specific, I would have said “I got work at a letterpress card-making store slash high-class office supply distributor.” But I thought the sentence “I got work at a pencil store” had more of an immediate kick to it.

I by no means was trying to fictionalize my life. I just made a word choice that I thought conveyed my emotional state of mind, which is a disbelief that I was going back to work behind a counter as opposed to being a professional writer.

When Caroline and I first met, it was this incredible melding of the minds. It was that really exciting moment where you are passing books back and forth and we’re getting stoned in her apartment and talking about our dreams.

We were talking about Amy Hempel and Lena Dunham and Zadie Smith. When we approached writing together, it was from a place of literary ambition. There are lots of factors that degrade that from a frayed working relationship to trying to type out nice sentence on a keyboard on your phone to the demands of the algorithm. All sorts of things.

Writing this essay, I was still drawing from all the same source material. I still brought my same toolbox with me. The difference being here that it was purely my story. I wasn’t trying to brand myself, and it wasn’t Caroline and working together to create this third person, which is herself online.

I do wonder, though … in reading the essay, your character is so coherent. The “Natalie Beach” in this essay is so well drawn. It has to have helped to have written “Caroline Calloway” all these years.

Yeah, I think so. Writing with Caroline and for Caroline was an incredible crash course in character creation and honesty and confessional writing. Caroline is a fantastic writer and I think the roadblocks to her creating great literary work have nothing to do with her talent. Her voice is really singular, and I think that’s the reason why she’s a figure who has over the years persisted in our culture.

Obviously right now, your relationship is not what it once was. Do you think you’ll be friends again at some point?

I don’t know. I haven’t been looking at her feed right now in part because I feel a deep guilt about causing her pain.

It’s a small thing, but Caroline was the one who introduced me to the man who did me the great honor of relieving me of my virginity. Which was very nice of her. And I’ll be eternally grateful.

And so a part of me was like, should I have figured out a way to fit that in because that was a really nice thing she did for me as a friend. This feels really juvenile now, I’m a married woman and it was many years ago.

But I also don’t know — Caroline and I haven’t interacted in two years and now suddenly we are in various ways crashing against each other, in front of everyone. I really care about her a lot and I know that she is going through a lot and this might sound disingenuous given that I’m one of the people who is contributing to the tough times.

When I emailed her to tell her that this piece was coming out, I told her that this is my perspective and that I really look forward to reading hers. Because I am truly such a fan of her writing and I want her to be able to be in a place where she can create work and respond to me as just one example of the stuff she can put out in the world.

Who are some of your favorite writers?

My favorite book, maybe, is “Grendel” by John Gardner. Its great. It’s about Beowulf but from the perspective of the monster. He is not of nature, but he is not of man and he’s wandering around with this wildly profane internal monologue asking existential questions and eating townspeople.

I just read “Three Women,” by Lisa Taddeo. I read Sally Rooney, I read “Trick Mirror.” I’ve been very anxious about this piece coming out and when my anxiety spikes, I bury myself in a book.

This interview has been edited for length and clarity.