Afro Emojis Don’t Exist. These Women Want to Change That. 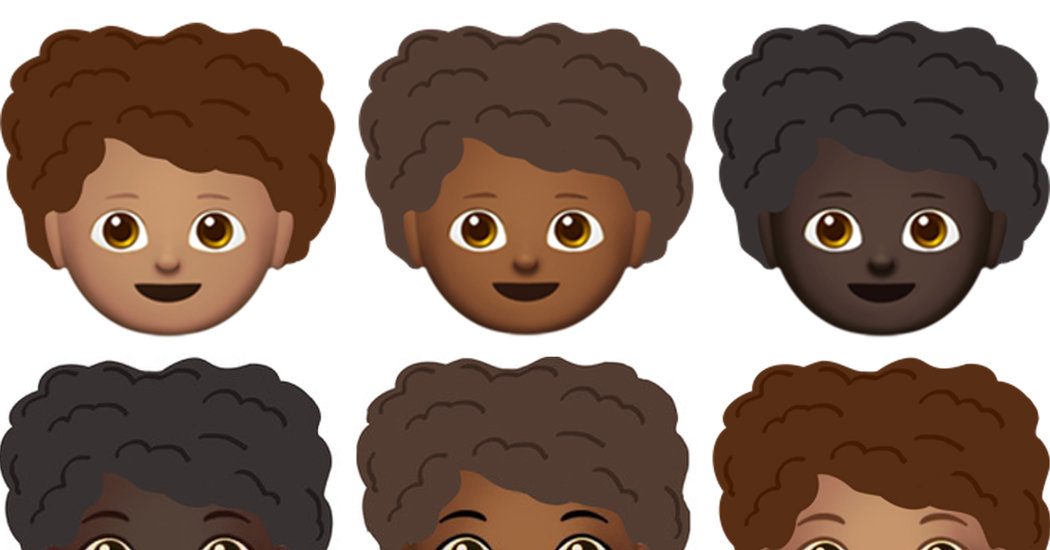 Many people connected to the African diaspora have Afros. And like anyone else, they send emojis to their friends — a zombie, say, or a mermaid or a genie.

But which emoji can they use to represent themselves?

Right now, 2,823 emojis are recognized by the Unicode Consortium, the nonprofit that provides standards for text on the internet and oversees emojis. Fifty-nine additional emojis are on the way, including a deaf person, interracial couples, a mechanical arm and falafel.

Yet there are still no emojis of any person with an Afro, even though symbols exist for women and men with long and short hair, curly and straight hair, and blond, black and red hair.

Rhianna Jones, 28, is on a mission to change that.

She and a friend, Kerrilyn Gibson, 25, have started a Change.org petition calling for the addition of an Afro emoji designed by Ms. Gibson. It has more than 2,000 signatures, and Ms. Jones said they planned to submit the emoji to the Unicode Consortium on Sunday.

“The beauty of culture inclusivity in this political climate is that our people are awakening,” Ms. Jones said in an interview. “What is amazing about our culture is that we have big hair, big energy, big stories and big voices. Emojis are the best way we can encapsulate our personality in digital conversations.”

The Unicode Consortium, which acts as the gatekeeper for emojis, includes executives from Apple, Google, Facebook and other tech companies. They meet quarterly and agree to induct approved emojis once a year.

Unicode allows for close to 70 emojis to be added per year, according to Greg Welch, a Unicode board member.

“The number of emojis is becoming quite large,” Mr. Welch said in an interview. “Every emoji adds to the amount of memory space on every phone. This isn’t a big deal if you have the latest phone, but if you’re in a developing country, with a small phone and not a lot of memory, it could be a big deal. This is why we don’t open the floodgates.”

According to Mr. Welch, approvals to proposals like this one would warrant numerous emojis in the future.

“Proposals like this actually require a lot of engineering to implement,” he said. “This feels like another in a continuing series of proposals that all give the user an opportunity to customize to their appearance.”

When the Unicode Consortium creates a standard for an emoji, companies then have to design and incorporate the emoji into their code and operating systems. After Unicode approves the emoji, it takes companies like Apple or Google several months to translate the standard to be compatible with their devices.

Ms. Jones, a freelance writer in New York who has a brown Afro, said she was inspired by her personal struggle with her hair as a biracial woman.

“I grew up feeling incredibly self-conscious of my hair because when I was younger the only societal norm of beauty in the media was straight, silkened hair,” Ms. Jones said. “People don’t really think about hair privilege.”

She added: “All these kids that are growing up on their devices don’t see themselves reflected. I would like them to be able to see themselves.”

Natural black hair has often been seen historically as unkempt or simply not the standard. Last month, New York City banned discrimination based on hairstyle, through its Commission on Human Rights. The law made New York one of the few cities in the country to legally link prejudice and personal presentation.

Activists and others have long made the case for natural black hair. Carolina Contreras, 32, is one of them.

She opened one of the first natural hair salons in the Dominican Republic and provides workshops and classes for young women on the island to learn how to style their natural hair. She has spent the last eight years working to “revolutionize the way black women see their hair by teaching them the correct way of caring for it,” she said in an interview on Wednesday.

“Some women tell me, ‘I can’t wear my natural hair to a corporate job,’ but you can, they are just going to have to see much more than just your hair,” said Ms. Contreras, who is opening a natural hair salon in New York this year.

“Black hair has not stolen anything,” she said. “It is not corrupt. It is not cheating anyone. It cannot be bad hair.”

Many black women now see themselves in spaces they were not used to occupying, and they are pushing to make those spaces bigger and more encompassing.

“With the Afro emoji, I want to create a space where we can bring that big-hair energy and celebrate our roots in digital spaces,” said Ms. Jones, who added that it was important that the emoji be “for us, by us.”

“It would be impossible for any singular design to encompass the multitextural complexity of Afro hair, with the variety in coils, lengths, volumes,” she said. “However, we feel our design is discernibly an Afro; it grows up, defies gravity and takes up space.”