A Star of ‘Moulin Rouge! The Musical’ Surveys Her Past 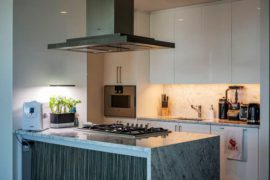 If friends and colleagues were asked to word-associate about the actress Karen Olivo, they might reasonably pop out with “warm,” or “down to earth” or “dedicated” or even “curry” (she makes it a few times a week to clamors of “encore”). But here is one word they would never mention to describe Ms. Olivo: minimalist.

How little, how very little these people know her. Have they gotten a load of Ms. Olivo’s one-bedroom sublet on the 61st floor of a new condominium development in Times Square? The apartment, a pristine expanse of Italian marble, wide-plank oak floors and floor-to-ceiling windows, contains little more than a bed, a bench, a table, a yoga mat, a small sofa, a small bookcase and a small dog named Eddie.

Actually, the pared-down aesthetic is a whole new thing for Ms. Olivo, 42, who plays a cabaret performer and courtesan in “Moulin Rouge! The Musical,” the Broadway adaptation of the 2001 Baz Luhrmann movie, which opens July 25.

“I’m that person who goes to Goodwill and always picks up a side table,” said Ms. Olivo, whose Broadway credits include “Rent,” “In the Heights” and the 2009 revival of “West Side Story,” for which she won a Tony for her performance as Anita. 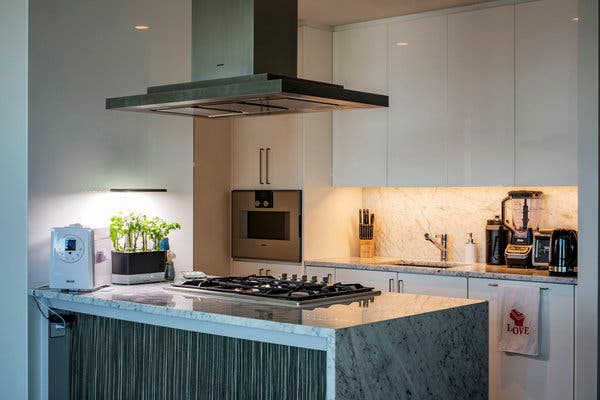 The air purifier/humidifier and the herbs supplied by an indoor garden are all in the service “of my getting to the theater and doing my job,” said Karen Olivo, a star of the new Broadway show “Moulin Rouge! The Musical.”CreditKatherine Marks for The New York Times

Six years ago, Ms. Olivo moved from New York to Madison, Wis., to be with her boyfriend, now her husband, Jim Uphoff, the marketing product manager for a company that makes lighting boards for theaters. There, Ms. Olivo lives in a farmhouse filled with antiques, pieces of art (some of them homemade), souvenirs and posters from her many shows and, yes, lots of side tables.

When she isn’t out of town for work, she’s in the basement studio where she sketches, paints and does handiwork. “I’m by nature a nester,” she said. “I have a lot of clutter in general.”

This past April, just before returning to New York to begin rehearsals for “Moulin Rouge!” (she has the role played by Nicole Kidman in the movie), Ms. Olivo packed up several boxes of books and blankets, paints and brushes, an easel, a sewing machine, knitting needles, yarn and crocheting supplies. When she gave the nod, her husband would send them.

She also made contact with an interior designer. When she gave the nod, he would come up with a floor plan and start hanging pictures and choosing furniture and accessories.

The cartons are still sitting by the door in Madison. The interior decorator is still waiting by the phone.

“As I began living in this space, I realized I had never before afforded myself a sleek New York experience,” Ms. Olivo said. “And then I started rehearsal and didn’t have time to do any furnishing. And then I realized that it feels like a clean slate. There are so many things happening at the theater, and when I come home I can download and be like, ‘O.K., everything is O.K.’ This is a very serene place.”

On a clear day: “I know this sounds really creepy, but because of the view in my apartment, I asked my husband to get me binoculars. I’ll stand at the window, call him on my cellphone and give him the traffic report, like, ‘The traffic on the George Washington Bridge is moving rather well today.’ It’s our little private joke.”

Born in the South Bronx and raised in Florida, Ms. Olivo left college — the Cincinnati Conservatory of Music — before graduation in 1998, when she got a job as an understudy and swing in “Rent.”

“I feel like most of my career I’ve lived in very humble places,” said Ms. Olivo, who can see some of those very modest abodes of her past from her current apartment’s floor-to-ceiling windows, including the “La Bohème”-worthy hovel on West 49th that she occupied when she moved back to town for “Rent.”

“Now I have an infrastructure around me, like a doorman who is personable,” she said. “At no point am I going to have to worry about something breaking and me having to call a fix-it- person.”

She added: “Having a great building with everything facilitates a state of mind in which I can throw everything at my job.”

There’s also a gym, a steam room and doggy day care for the charmingly rumbustious Eddie.

By design, the apartment is light on furniture and accessories. The bust of Don Quixote and Ms. Olivo’s Tony Award made the cut.CreditKatherine Marks for The New York Times

But even the most well-equipped buildings don’t have everything. Ms. Olivo, who has a large garden back home in Madison, has grown accustomed to produce and herbs just outside the back door. In Manhattan, she has created her own version of a vegetable patch on her kitchen counter, where she is successfully cultivating basil and tomatoes, though the dill has, so far, not been performing to expectations.

Despite her newfound appreciation for traveling light and living unencumbered, a necessity is still a necessity. Ms. Olivo brought a bust of Don Quixote to New York, in part because one of the first shows she ever saw at the Hirschfeld Theater, now the home of “Moulin Rouge!,” was “Man of La Mancha.”

She also came to town accompanied by her Tony Award, “but not for the reason one would think,” Ms. Olivo said, clearly concerned that the statuette’s presence on the small dining table seems like a boast.

“Once you have already achieved the thing you set out to achieve, you can just do the work,” she said. “So I bring the Tony with me to remind me, ‘You’ve done the work; you already have one of those. Be true to your art. Be true to the show. Everything is fine.’”

When Ms. Olivo gazes out the window, everything is more than fine. “I’ll sit here in the morning with my coffee and find something in the distance and try to focus on it. It’s very soothing,” she said.

“I’ve never before lived in a place with a view like this. If you’re ever going to do it, why not do it here in New York City?”