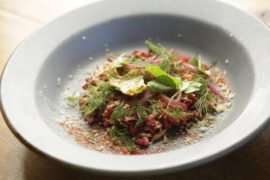 Many of the predictions about what we’ll eat and drink in 2019 point to a quiet, restorative and potentially grim time ahead. Then again, these forecasts always arrive carrying the clean, healthy pine scent of New Year’s resolutions.

The good news: There will be cheese tea. And salad robots, according to the prognosticators.

As we pored over dozens of lists handicapping the next big food trends, and interviewed the people who get paid to drill into consumer behavior, we kept in mind that everyone could be dead wrong. Food forecasting is not a science, or even an art. Still, the game is a fun one.

Here are some of the most intriguing guesses at what and how Americans will be eating in the new year.

Will celtuce, a Chinese lettuce bred to highlight its long, crunchy stem, be the year’s breakaway green?CreditAndrea Sperling/Getty Images With health scares about romaine, and the popular Little Gem lettuce hitting a saturation point, the field is open for a new lettuce to catch on.CreditAxel Koester for The New York Times

The great romaine scare of 2018 — a strain of E. coli that was eventually traced to a reservoir in California — has helped make lettuce ripe for a new star in 2019. The current darling of the restaurant salad, Little Gem lettuce, was denounced this month as overexposed by New York magazine’s restaurant critic, Adam Platt.

Expect to see little-known varieties showing up on menus, and an explosion in lettuces grown hydroponically, many of them in urban container farms. Some chefs are rallying around celtuce, a lettuce with a leafy, bitter top and a stalk that’s kind of a cross between celery and asparagus. Chinese cooks know it as wosun. Even wild weeds like dandelion greens or sorrel may get a shot. Whichever wins, kale is still over. 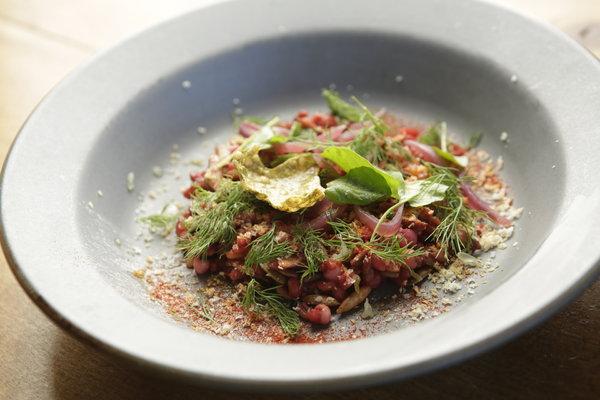 Food forecasters say dishes with fermented ingredients will grow in popularity, like this noorook, a grain porridge seasoned with koji, from the Los Angeles chefs Kwang Uh and Matthew Kim.CreditElizabeth Lippman for The New York Times

Sour and funky, with shades of heat. This is what happens when you mix the interest in fermenting with the millennial palate. Melina Romero, who has the title of trend insights manager at CCD Helmsman, a food research and product development firm in Emeryville, Calif., explained the generation that loves global mash-ups and bold flavors this way: “They grew up with Flamin’ Hot Cheetos, and while they still want spicy, I think, beyond that, they have grown to become interested in flavors that are acquired — sour flavors and even funky flavors like fermented foods.”

Tea of all kinds, but particularly the creamy, sometimes salty import from Taiwan called cheese tea, will appear on more menus. CreditJeenah Moon for The New York Times

The Thing You Will Try Against Your Better Judgment

Cheese tea, an import from Taiwan, will hit the American mainstream this year. Green or black tea is sipped through a cap of cream cheese blended with cream or condensed milk, which can be either sweet or slightly salty. It’s already a hit in San Francisco, where they make it with Meyer lemon and mascarpone.

If it has to do with fermenting, probiotics or gut-friendly food like kimchi, you will likely be eating more if it.CreditKarsten Moran for The New York Times

Anything to do with your gut flora. That means you can expect more ways to ingest probiotics and prebiotics and foods designed to improve the bacterial health of your intestinal tract, according to several grocery store chains and wellness market analysts. As the obsession with digestive health dovetails with the fascination for fermenting, kimchi, sauerkraut and pickled things will work their way into new territory. Smoothies with kefir will be popular, and kombucha will show up in unexpected places like salad dressings.

Diets that emphasize fat over carbohydrates will continue to dominate. Instagram says video posts using the hashtag “keto” — the name of a high-fat, low-carb diet — grew fivefold over the past six months. Hannah Spencer, a registered dietitian who tracks the food service industry for the market research company Mintel, said the keto diet might be losing its edge. Still, she added, restaurants will add more low-carb options. The term “pegan” — a cross between a paleo and a vegan diet — will take hold. Pinterest says the number of searches for the term rose 337 percent in the past six months.

Cooking in foil packets is a technique expected to gain popularity in the coming year.CreditIlmoro100/Getty images

With barely any cleanup and a deep whiff of nostalgia (remember your first Scout camping trip?), cooking dinner in foil packets is poised for popularity. Pinterest notes that searches for “foil-pack dinners” have jumped nearly eightfold in the past six months.

At the bar, expect more natural wines, lighter drinks and cocktails without any alcohol.CreditLisa Corson for The New York Times

At the bar, lighter wines, natural wines and drinks with less or no alcohol will be popular. Americans ages 18 to 34 are more interested in spirit-free cocktails than any other demographic group, according to Mintel. As a result, bartenders will replace high-alcohol liquors like gin with lower-alcohol wines like Prosecco in mixed drinks, and make more use of shrubs, craft vermouths, botanicals and distilled nonalcoholic spirits like Seedlip. This may force bars to try to come up with better names than the no-jito or the no-groni. Outlier prediction: Forbes magazine is betting that the breakfast cocktail will be big.

With food delivery growing and waste reduction a priority for many consumers, restaurants will feel pressure to cut back on packaging and the use of plastic.CreditSunstock/Getty Images

The Case Against Waste

With the plastic straw and the plastic bag increasingly out of fashion, restaurants, food manufacturers and groceries will face new pressure to reduce other packaging waste. In a recent Mintel survey, 36 percent of diners said they wanted restaurants to cut back on packaging. (The number is even higher among baby boomers.) Restaurants that serve food on plastic with disposable cutlery will have an incentive to invest in reusable plates and forks. Cutting waste in the increasingly robust carryout and delivery markets will get new attention, too.

Restaurants will keep seeking ways to expand their brands beyond food; Dunkin’ Donuts has put its name on a Saucony running shoe, and KFC recently sold out of fire logs that smell like fried chicken. For higher-end restaurants, the vehicle of choice will be the customized Spotify playlist. David Chang has already issued one, as has Flour & Water in San Francisco.

Substantial vegetable entrees will become a fixture on restaurant menus, in the way that alternatives to dairy creamers became standard at coffee bars a few years ago. Many diners have started to eat less red meat or abandon animal protein altogether, whether for health, environmental or ethical reasons. A few corporations have banned meat consumption on their campuses. In Los Angeles, a member of the City Council this month proposed a law that would require a substantial vegan protein entree be available at movie theaters and other large entertainment centers.

Laboratory-grown proteins will enter the mainstream. KFC, Tyson Foods and Cargill are investing heavily, and the products are catching on so fast that ranchers have started campaigns to stop the engineered proteins from being called “meat,” Forbes reports. Prepare for the next generation of plant-based alternatives to dairy products: substitutes for cheese, butter and ice cream made with nuts, soy or coconut.

Salads made by robots like this one from Chowbotics can assemble a customized bowl of fresh vegetables in about two minutes. CreditChristie Hemm Klok for The New York Times

The Tech Advancement You’ll Hate Until You Need It

Salad-making robots will show up in hospitals and airports, where freshly made food is not easy to find at all hours. The systems rely on chilled containers of fresh ingredients that are restocked during the course of the day. Push a few buttons on a keypad and the robot makes a custom salad topped with dressing.

The Hope for Dope

Major food and beverage companies are researching ways to get THC, the psychoactive component of marijuana, and cannabidiol, a part of the plant that may have therapeutic properties, into more food and drinks. The authors of the federal farm bill have removed hemp from the list of controlled substances, and Gov. Andrew M. Cuomo is pushing to legalize recreational use of marijuana in New York.

The New ‘It’ Vegetable

It’s a tie between mushrooms — which have acquired what food marketers call a health halo and are expected to pop up in teas, desserts, jerky and cocktails — and sea vegetables, which most people just call seaweed. Consumption of seaweed is growing 7 percent annually in the United States, James Griffin, an associate professor at Johnson & Wales University, told Nation’s Restaurant News. It checks all the boxes: healthful, environmentally sound and full of umami.

Khachapuri, a traditional egg and bread staple of Georgia, is a ready-made Instagram star.CreditMorgan Ione Yeager for The New York Times

The New ‘It’ Cuisines

It’s a tossup. The market research firm Technomic says popular dishes will come from eastern Mediterranean nations like Lebanon, Syria and Turkey. Baum & Whiteman, a consulting firm based in New York, is betting on food from the “Stans” — Kazakhstan, Tajikistan and Uzbekistan. The global buyers for Whole Foods Market have money on flavors from the Pacific Rim. The San Francisco food consultant Andrew Freedman is calling it for Georgia, with its Instagrammable star, khachapuri — the cheese-filled bread boat topped with a runny egg. The prognosticators at the Kind food company are pulling for the flavors of Africa, though they did not specify a country.

The Cause of the Year

How a restaurant or food company cares for its employees, its purveyors, its customers and its community will move up the priority list in 2019, Mr. Freedman said. More chefs will become first responders, providing food at disaster sites. Companies will fine-tune training for how employees should treat one another. Immigrants and their role in American food culture will be front and center.

Sara Brito, a founder and the president of the Good Food 100 list, said in her 2019 trend report that customers will demand that restaurants tend to more than just how food tastes.

“They need to demonstrate they care about the whole system and story of food,” she said, “including the environment, farmworkers, animal welfare and inclusion in the workplace.” 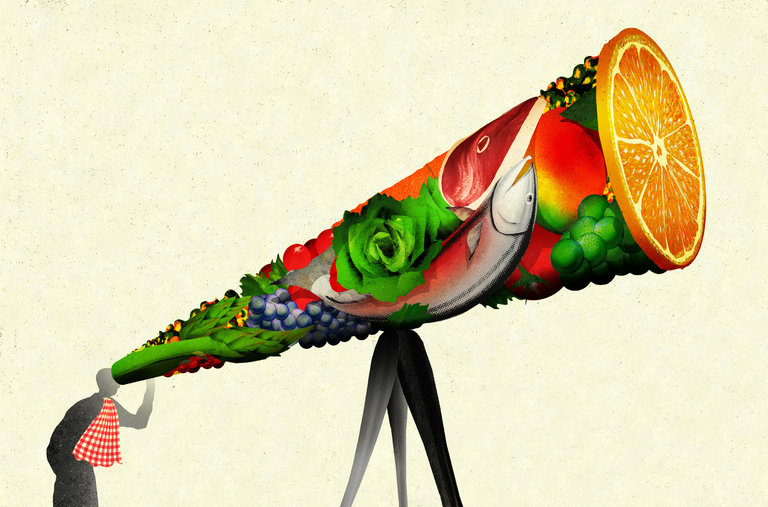 Bubble Tea? So 2002. A Sampling of Food-Trend Predictions 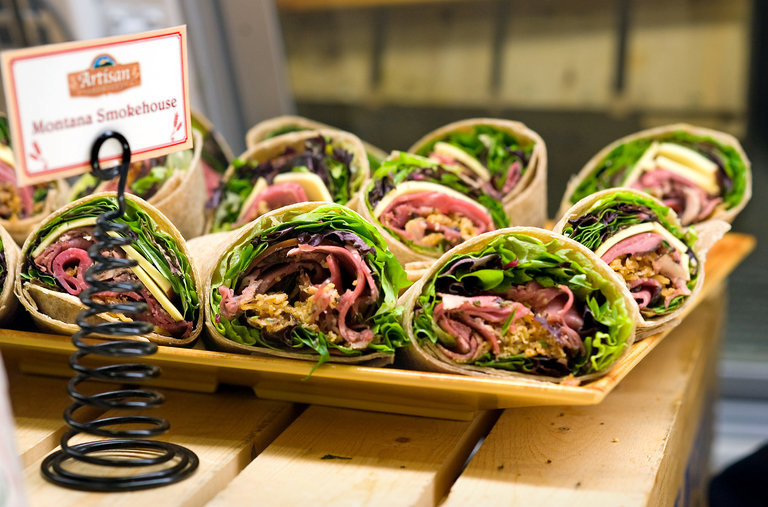 FacebookshareGoogle+sharePinterestpin it
Off the Menu: Thomas Keller Opens Another Napa Valley Spot. This Time, It’s a Taqueria.Guitarist Has Brain Surgery, and Strums All the Way Through
Latest