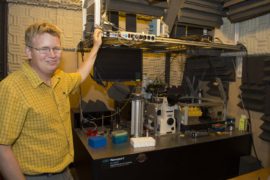 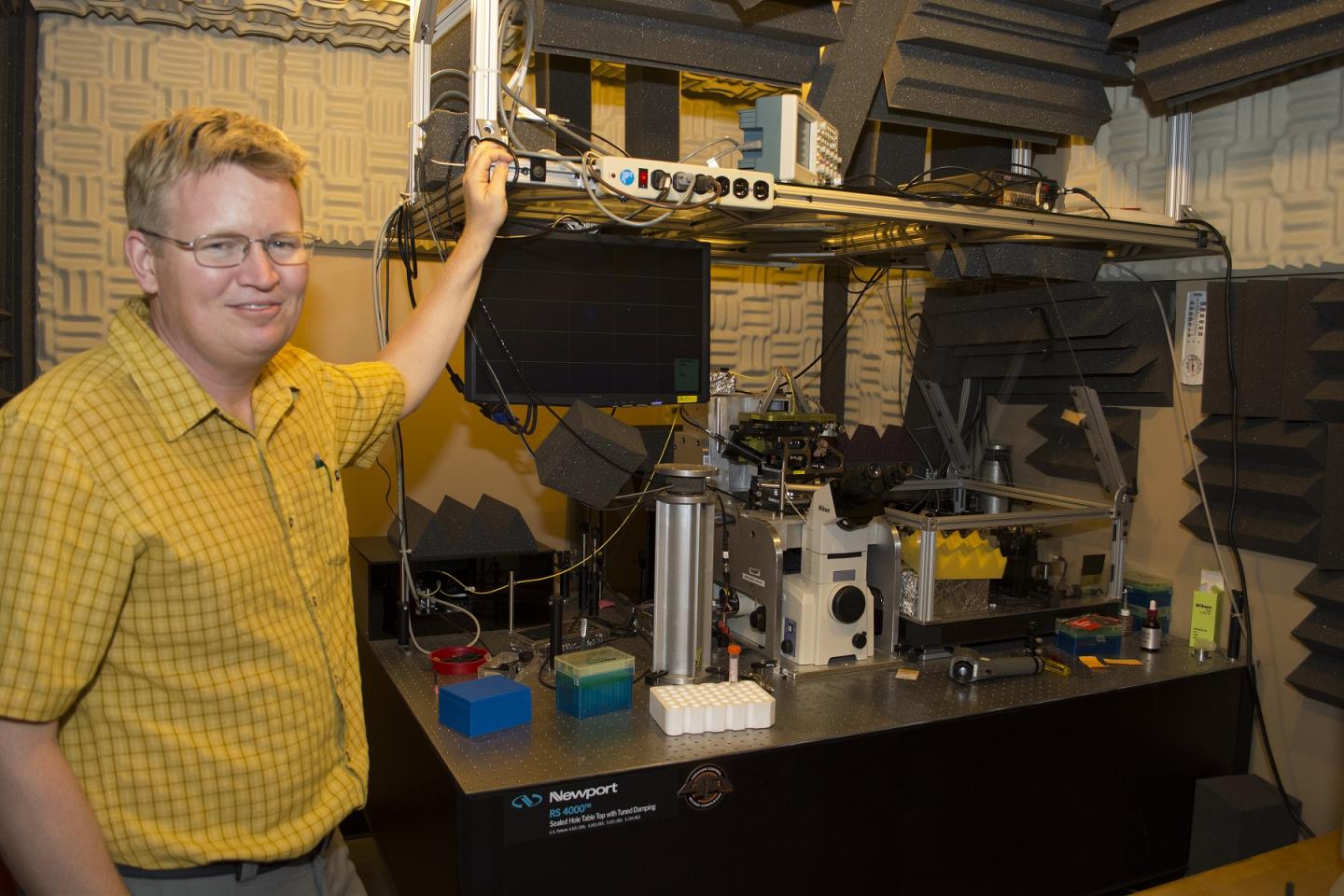 IMAGE: Gavin King and a team of scientists used this atomic force microscope, bottom right, to study the movement of the E.coli proteins. Unlike previous studies where proteins were frozen, the… view more

The flow of traffic through our nation’s highways and byways is meticulously mapped and studied, but less is known about how materials in cells travel. Now, a team of researchers at the University of Missouri is challenging prior theories about how material leaves the inside of an E.coli cell. This discovery could have important implications for how we treat diseases.

«Proteins are like vehicles that can carry information and materials in cells,» said Gavin King, an associate professor of physics in the MU College of Arts and Science and joint associate professor of biochemistry. «We focused on the cells of E.coli, which have two membranes. We observed that when proteins exit the cell’s inner membrane, the cell adjusts the way it transfers the protein through the channel depending on the type of protein being transported.»

King worked with Linda Randall, professor emerita of biochemistry. Randall verified the transportation function of E.coli cells outside of their natural environment. Once verified, the samples were sent to King where King’s team used an atomic force microscope to study the movement of the E.coli proteins. Unlike previous studies where proteins were frozen, the atomic force microscope allows researchers to observe the proteins moving in a fluid environment that closely resembles their natural environment.

«Before our study there were two ways of describing how proteins moved across the cell membrane — either a piston-live movement similar to a car’s engine, or a more perpetual motion known as the Brownian ratchet,» King said. «Neither model accounted for the differences based on the type of protein being transported. Just as different types of vehicles move differently so do different types of proteins. The maps we made to depict the proteins’ movement suggest nature might be more complex than previously thought.»

These findings provide basic knowledge on how a cell sends and receives material and information. For instance, a drug can pass through membranes in order to affect a cell, and similarly, some information must pass through membrane channels to exit the cell. While other cells besides E.coli may not have E.coli’s exact protein transportation system, King said a similar system exists in all cells.

The study, «Direct visualization of the E. coli Sec translocase engaging precursor proteins in lipid bilayers,» was published in Science Advances. Funding was provided by an endowment from the Hugo Wurdack Trust at MU, a grant from the National Institutes of Health (GM29798), a National Science Foundation CAREER Award (1054832) and a Burroughs Wellcome Fund Career Award at the Scientific Interface. The content is solely the responsibility of the authors and does not necessarily represent the official views of the funding agencies.