A Mexican Restaurant in the Bronx Prepares for an Asylum Case 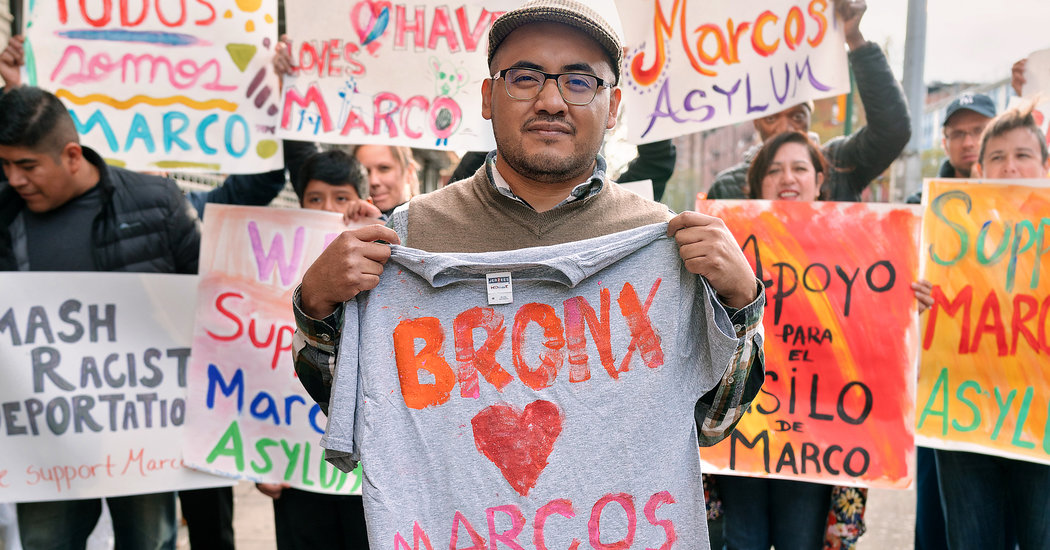 On Sunday afternoon, La Morada, a family-owned Oaxacan restaurant in the Mott Haven section of the Bronx, hummed with activity. Children ate tortillas, with fingers stained green and purple from acrylic paint, as their parents strategized over steaming mugs of coffee.

They had come to make signs in support of the owners’ son, Marco Saavedra, 29, who will appear Thursday morning in federal immigration court in Manhattan to petition for political asylum. Mr. Saavedra first came to the United States from Mexico with his parents, who are undocumented, at age 3.

In 2012, he turned himself in to border agents in Florida, and was detained, so he could publicize conditions from within a detention center. That effort put him in removal proceedings and resulted in the release of 70 immigrants. It was the subject of a documentary, “The Infiltrators,” which won two awards at the Sundance Film Festival this year.

“I had been hiding in the shadows for so long that I just reached a breaking point,” Mr. Saavedra said.

In 2013, he flew to Mexico and sought re-entry to the United States — as one of Dream 9, as the group called itself — to protest the treatment of migrants. Wearing his graduation robes from Kenyon College, he approached the border to request asylum as a human-rights advocate.

“We carry this fight in our blood,” said his mother, Natalia Mendez, 49. “My ancestors were never colonized, so wherever we are, we will be fighting for justice.”

Long before the current crackdown on unauthorized immigrants, the family have been vocal about their mixed immigration status: Mr. Saavedra’s younger sister and niece are American citizens, but he, his older sister and his parents are not.

“This is the kind of case that we’d have won 10 years ago, but now it’s uncertain,” said Damian Vargas, an immigration lawyer and regular customer.

Through La Morada, open since 2009, the family has fought gentrification, deportations and what they see as unjustified arrests. On its website, La Morada described itself as “undocumented-family owned.”

“There is a lot of fear here, fear of exposure, fear of being seen,” said Liza Austria, 41, a founder and the director of UpBeat NYC, a free music program for neighborhood children. “This family gives the undocumented community such a sense of pride.”

Her shirt read “Todxs Somos Marco,” a gender-neutral way to say “We are all Marco” in Spanish.

“Marco is an American hero,” said Marcial Godoy-Anativia, a regular customer and the managing director of the Hemispheric Institute at New York University, which connects artists, scholars and activists across the Americas. “His self-deportation is on the par with the greatest acts of American civil disobedience.”

On Sunday, La Morada, which makes Indigenous Mixtec cuisine, felt like a living room. Pozole, a Mexican stew served at weddings and christenings, flowed freely. At any given time, six different moles on the menu simmer for at least eight hours each. Only the youngest daughter, Carolina, knows the recipes.

“At this time, when there’s so much discrimination against Mexicans, this restaurant gives us a feeling of power,” said Lorena Kourousias, the executive director of Mixteca, an organization serving Latin American immigrants in New York. “It’s a little piece of Mexico in the Bronx.”

The South Bronx, which includes Mott Haven, has higher rates of adult obesity, diabetes and high blood pressure than the city overall, according to a 2017 report by the New York City Food Policy Center at Hunter College; many residents consider serving healthy and affordable food to be an act of resistance.

“Whenever I have to work with frozen food or food from a can, it’s like there are chains around my hands,” Ms. Mendez said. “Food is something sacred, something alive.”

Ms. Mendez makes a point to offer her neighbors assistance. If they need a cup of sugar, they can have one, no questions asked; if a family member is arrested, someone at the restaurant will know who to call. A lending library, which runs on an honor code, has books in several languages by former President Barack Obama, J.K. Rowling and Jean-Paul Sartre.

Mr. Saavedra does not expect to be detained or deported on Thursday, and he can appeal the Thursday decision if he is not granted asylum. As a visible defender of human rights, Mr. Saavedra would be in danger if he were sent back to Mexico, where activists have been targeted, kidnapped or killed.

“We are facing our worst fear,” said his older sister, Yajaira Saavedra, 30. “But whatever happens to my brother will happen to our whole family.”

If the unexpected happens, his entire family is prepared to close the restaurant and move to Mexico with him.

Over a decade of pozole, mole and café con leche, the restaurant has given the neighborhood shelter, community and a place to meet. That’s what the family wanted when they opened La Morada in the midst of the Great Recession. They chose the name from a favorite Bible verse: John 14:2.

At the hearing on Thursday, neighbors will be there, carrying hand-painted signs to offer them shelter in return.

“This restaurant is a lot more than a restaurant,” said César Barros, a regular and the director of Latin American studies at the State University of New York at New Paltz. “It’s also a sanctuary.”