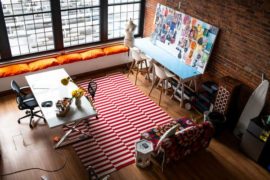 DETROIT — If you come from a place that has exported its tastes in design, architecture, fashion and music to a welcoming audience for well over a century; a place steeped in art made of broken glass and low-slung homes with triple-thick brick walls; a place where the bottom fell out in a dizzying way, but where retailers and hoteliers and college students and everyday workers are walking the comeback trail together, you have a healthy respect for adversity, and for problem solving.

You know that setbacks can arrive at any time, no matter how bright your current shine may be. They may knock you down for a bit, sure. But you can get back up.

Tracy Reese is such a person. And that place is Detroit.

But she is probably best known for creating the sleeveless pink jacquard dress that Michelle Obama, when she was the first lady, wore to the Democratic National Convention in 2012 — and for being one of the very few African-American female designers atop her own brand.

That brand dissolved last year, after a 20-year run. This spring she unveiled Hope for Flowers, a sustainable clothing line based in Detroit, where she was born. Followers of her work will recognize the bright colors, the generous lines, the flow that seemingly keeps flowing even when the body is still.

But they may not know it is also an answer to two questions that had nagged Ms. Reese for years: How can you slow it down and be profitable? And how could she involve Detroit?

After Parsons, Ms. Reese went through the rise and fall of her first house, a stint at Perry Ellis and the restart of her Tracy Reese label in 1996, in New York’s garment district. She took on an investor, Omprakash Batheja, and the business peaked in 2013, when it sold $23 million in wholesale goods. But as the fashion calendar became more demanding, requiring “stuff and more stuff,” she said, she started to wonder.

By 2018, the business was contracting. To spur sales, Ms. Reese said, her investor suggested that she go down-market. She disagreed, and the business continued to spiral downward. They are now in court to dissolve their partnership and determine who will own the Tracy Reese name.

Ms. Reese, pivoting, is already in a different place.

Her new line is priced from $250 to $425 and incorporates “organic cotton, organic linen and also Tencel,” said Ms. Reese, warm and relaxed at her Detroit office, using the brand name for lyocell, a fabric made from wood pulp gathered from sustainable tree farms. Her sense of color and flow is apparent at her work space, on the second floor of a gritty industrial block of former warehouses.

On the inside, it’s all reclaimed wood, loftlike ceilings and windows that take up an entire wall, decorated with bright orange pillows and a floral quilt draped over a settee. Several pieces from the new line hang from a rack along the wall.

“Some people need the purity and peace of white spaces, but that’s never inspired me,” Ms. Reese said.

This year, she started devoting more time to a house she bought in 2017 in the Midtown section of Detroit. Many of her family members live in the city, including a sister and several cousins.

She and her siblings were raised with a healthy amount of civic pride. Her mother insisted that the family spend its money within the city limits whenever possible. Now that Detroit is pushing ahead post-bankruptcy, Ms. Reese said she has been heartened by all of the entrepreneurs, artists and activists taking a stake in the city, and she decided, “This all can’t be happening without me.”

Ms. Reese has formed a partnership with Détroit Is the New Black, a label founded by Roslyn Karamoko that now showcases Hope for Flowers pieces and other designers at its anchor store on Woodward Avenue, Detroit’s main thoroughfare. She found a screen printer in Detroit to dye her fabrics for the Hope for Flowers collection, and she got the sewing center at St. Luke New Life Center in Flint, Mich., to stitch the pieces.

Ms. Reese first worked with St. Luke on an exhibit called “Flint Fit,” an installation for which the artist Mel Chin went to Flint during the water crisis, collected over 90,000 empty water bottles and had them recycled into thread and fabric.

Mr. Chin then asked Ms. Reese to design pieces for the fabric, and she created a rainwear and swimwear line that was sewn at St. Luke. Those pieces were a part of Mr. Chin’s exhibit “All Over the Place,” which was featured at the Queens Museum in New York in 2018.

A proud product of the Detroit public school system — she graduated from Cass Technical High School in 1981 — Ms. Reese has taught a few design workshops at a public elementary school, and is lobbying to bring arts classes back to the curriculums.

She is also a board member at the Industrial Sewing and Innovation Center, or I.S.A.I.C., a nonprofit Detroit-based institute planning to open a for-profit industrial sewing and manufacturing center late this year, on the third floor of the Carhartt flagship store in the city.

The space, which was a dusty defunct parking lot this summer, will gain walls and three huge skylights, providing natural light for the workers. I.S.A.I.C. plans to start with about two dozen people, training them in sewing, robotics, production, engineering and automation.

“She sees Detroit as a place to demonstrate how industry could and should operate,” said Jennifer Guarino, the chairwoman of I.S.A.I.C. and the vice president of manufacturing at Shinola, another Detroit-based business that has infused the city with a renewed fashion sense. “One that is diverse, inclusive and offers equity in growth for longtime Detroiters.”

Ms. Reese said she hopes the institute’s sewing project will act as both a model of a new kind of factory and an inspiration for other producers who may come to the city. She takes a similar view of Merit Goodness, the sewing circle at St. Luke’s, Détroit Is the New Black and other businesses such as Detroit Denim (whose co-owner Brenna Lane is also an I.S.I.A.C. board member), which she hopes will inspire more responsible consumption.

In June, Ms. Reese was a finalist in the CFDA/Lexus Fashion Initiative, a program that provides business support to help brands with responsible strategies. According to Steven Kolb, the chief executive of the CFDA, “What struck me in watching her go through the program was the emotion she had connected to her efforts, sometimes even with tears in her eyes. You could genuinely see it wasn’t just marketing.”

Ms. Reese splits her time between Detroit and New York, and she will be showing Hope for Flowers this fall to several wholesale accounts for spring 2020. Thus far she sells to consumers via two stores — Anthropologie and Détroit Is the New Black — which is just fine with her.

“My strategy is to go low and slow, to be very intentional about my footprint,” she said. “I always wanted to make beautiful clothes. Now I want to do it the right way.”