A Family’s Christmas, Filled With the Tastes of Jamaica 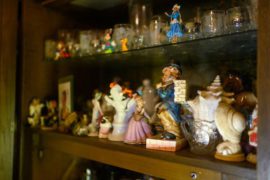 CENTRAL ISLIP, N.Y. — On a nondescript block in this placid Long Island town sits a house that is perennially ready for Christmas.

All year long, the couches, rugs, walls and even the upholstery on the dining-room chairs are a bright, festive shade of red. The pillows in the living room sport bears dressed in red and green. The crowded display cases contain antique Santa Claus figurines.

But the other night, the heart of the holiday preparation was taking place in the kitchen, where Hazel Craig and her daughter Jessica Craig were making curried goat, fragrant with turmeric and thyme, part of a test run for their Christmas feast. They fussed over silky sweet potato-and-coconut pudding and spice-coated callaloo, a sturdy leafy green stewed with tomatoes and onions.

These dishes are fixtures of the holiday meals in Hazel’s native Jamaica, where Christmas is a full-on party, complete with parades and markets.

Hazel, 70, immigrated to New York from Jamaica in 1970. Here, she raised her nine children, including Jessica, 34, her third-youngest, who is now the head pastry chef at L’Artusi, a contemporary Italian restaurant in the West Village of Manhattan.

Hazel’s curried goat — a staple of the family’s holiday meal — includes potatoes, onions, a sliced Scotch bonnet chile, and curry powder made by a friend in Jamaica.CreditDaniel Krieger for The New York Times The sweet potato-coconut pudding is topped with raisins that Hazel soaks in water to make them plumper.CreditDaniel Krieger for The New York Times

Hazel’s kitchen is cluttered with objects she has picked up at garage sales and thrift shops: a fork inscribed with Bible verses, a figurine of a mouse dressed as a baseball player. Jessica soaked raisins to top the sweet potato pudding, while Hazel stood nearby, washing the callaloo. Hazel put her glasses on to peel the tough outer skin of the stalks with a deft flick of her small, machete-like knife.

The two worked diligently, exchanging quiet smiles, Jessica playfully reminding their mother every so often that she needs to cull her collection of trinkets.

“I can’t do everything from Jamaica because this country is a different country,” Hazel said. “But Christmas is the tradition I wanted to bring my kids.”

Celebrating Christmas together, to the hilt, has been one of the few constants during the family’s often troubled time in the United States. 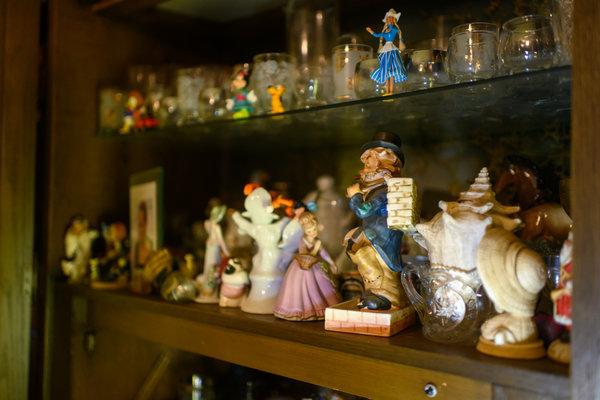 Hazel’s house in Central Islip, N.Y., is teeming with trinkets she picked up at garage sales and thrift shops, including a few vintage Santa Claus figurines. CreditDaniel Krieger for The New York Times

Hazel and her first husband, Vincent Lawrence, moved to this country because they had been told it was a “paradise,” she said. “When I first came here and saw it raining, I turned to my husband and said, ‘I didn’t know it rained here!’”

They lived in Queens. After Vincent died, she married her second husband, Gregory Craig, in 1978. A few years later, the family moved to Central Islip.

The Craigs were the first black family in the neighborhood, and they did not receive a warm welcome. Hazel says she was regularly pulled over by the police for no reason. As a teenager, her son Everton Lawrence had a hose turned on him by a woman he had asked for directions to the nearest store.

The family was riding in their car once when a bottle hit it, thrown from another car. “My husband pulled over, and the kids wanted to fight him, and they were calling him names,” she said. “I called the cops, and one of the cops said to me, ‘Some of us are still not overcome,’ meaning that some people still can’t get used to … “ Her voiced trailed off.

In 1989, their house burned to the ground. Hazel believes it was arson, as someone had spray-painted racial slurs inside the garage. “We lost everything,” she said.

Her husband had left her not long before the fire; now a single mother, she moved her family to a trailer and worked three jobs. The Craigs had no furniture or clothes — Hazel kept the children out of school for weeks because they had nothing to wear.

But that didn’t stop her from celebrating the holidays.

Two years after the fire, the family finally moved into their rebuilt house. “It was empty and it wasn’t finished, so we slept on the floor together,” Jessica recalled.

“I can’t do everything from Jamaica because this country is a different country,” Hazel said. “But Christmas is the tradition I wanted to bring my kids.” CreditDaniel Krieger for The New York Times

But once again, come Christmastime, Hazel put up a tree and cooked. That’s all she needed to evoke the holidays. “I wanted to instill that in my kids — just the fact that we were together,” she said. “After the fire, we grew much closer.”

In Jamaica, the season is hailed with vast markets where local bands play, and street vendors sell boiled corn and jerk chicken. Jonkonnu, a parade of African masked dances, dates back to the days of slavery. People drink sorrel, a beverage made with dried hibiscus flowers and ginger, and eat rice and peas.

“I remember going to these elaborate parties, baking cakes, and going from place to place with next-door neighbors to visit relatives,” said Nigel Jones, 60, a Bay Area chef who was raised in Jamaica. The co-owner of Kingston 11, and the chef and a partner at Kaya, Mr. Jones said that Christmas on the island “is more of a family activity and about community socialization. Here in the U.S., it has become a big commercial holiday.”

Hazel Craig said that as a child growing up in Spanish Town, she felt happiest at Christmas. “It was a lot of festivity,” she said. “People would dress up and play the drums and walk in the streets and dance. There were games.”

Her grandmother would always make Hazel’s favorite dishes, which included curried goat and a fruitcake with cherries and raisins that had been marinating in rum since the previous Christmas.

Her own children are now scattered across the country, but they all return to Central Islip on Christmas morning. They exchange gifts, and Hazel prepares a profuse feast of Jamaican specialties that keep everyone full for the whole day. They include festival — fried dumplings made of cornmeal — and a rich drink of carrot juice, condensed milk and nutmeg.

“Christmas is one of the few times that the whole family actually gets together to have our comfort foods,” Jessica said. “It makes my mom super-happy to feed us. Those foods mean a lot.” (This year, their gathering will be smaller: Everton died in August of a heart ailment, leaving a wife and two children.)

In her kitchen, Hazel tasted the callaloo as it stewed away. She asked Jessica to hand her the salt. “When I say salt, I always mean seasoned salt,” she clarified, as in Lawry’s, the popular blend laden with paprika and garlic. She grated the nutmeg for the sweet potato pudding, and chopped the batata sweet potatoes, a white-fleshed varietal that bolsters the starchy, dense texture of the dish.

The Christmas spread at the Craig house encompasses many dishes that are fixtures of holiday meals in Hazel’s native Jamaica — like rice and peas, and callaloo, the sturdy green cooked with tomatoes and onions.CreditDaniel Krieger for The New York Times

Last, in a small pot Hazel combined the ingredients for the curried goat, which included a sliced Scotch bonnet chile (she did not remove the seeds), potatoes (her trick to a thick, hearty broth) and curry powder made by a friend in Jamaica. She insisted that the best way to prepare goat is not to brown the meat first, but to cook everything all at once in the same pot. “When you heat everything up together,” she said, all the flavor “gets locked in there.”

At L’Artusi, Jessica makes olive oil cakes and panna cotta. But she talked excitedly about someday opening an all-day cafe that serves some of the dishes from her childhood, like beef patties and banana fritters.

Her mother wasn’t thinking that far ahead. All that was on her mind as she placed the goat in the refrigerator to marinate was Dec. 25, when her children will show up at her door with their spouses and children in tow. They’ll tear open presents and reminisce over callaloo and sweet potato pudding.

Life in America hadn’t turned out exactly as she imagined when she left Jamaica 48 years ago. But Christmas has. 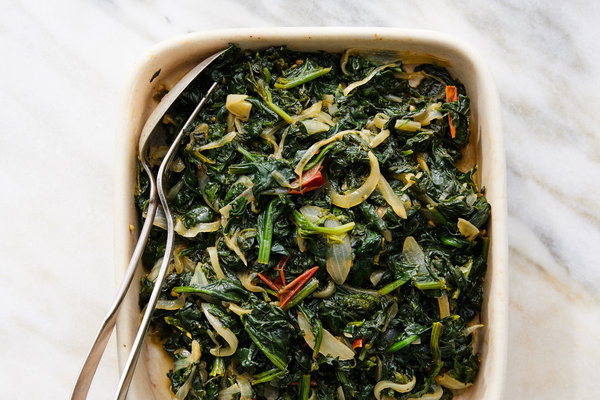 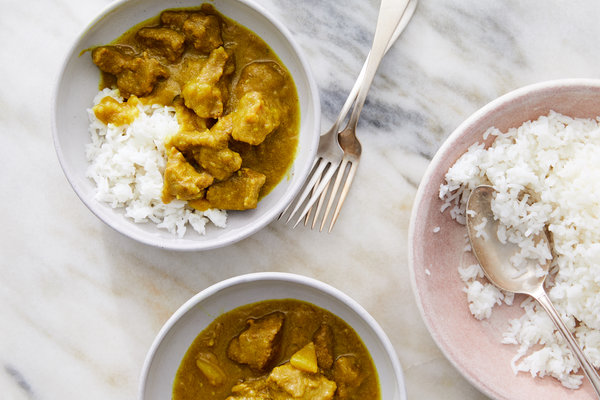 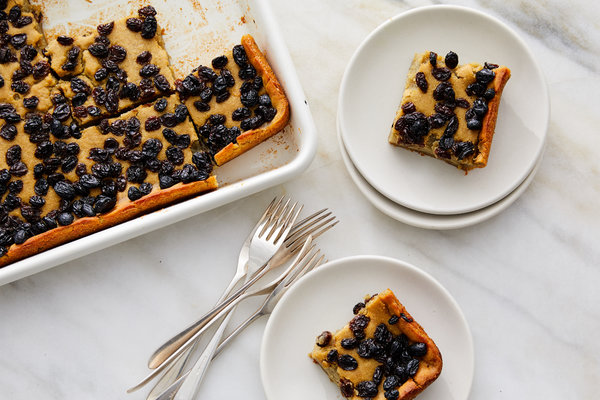 FacebookshareGoogle+sharePinterestpin it
noted: The Laundromat Is Hot!Restaurant Review: What If Brexit Were a Restaurant?
Latest