A Dad by Any Other Name 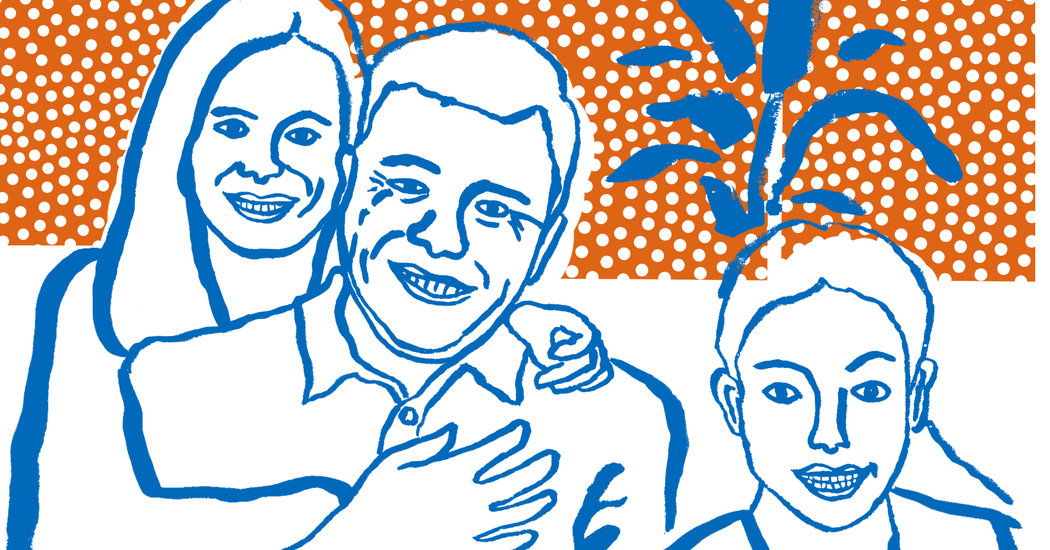 After the divorce, my daughter Marisa started calling me Bill.

“It’s Dad,” I’d hiss through clenched teeth, smiling at the checkout clerk and miming a kids these days expression. “O.K., Bill,” she’d reply and walk off, coolly aloof, as only an offended 14-year-old girl can be.

Initially, I attempted to ignore this change. One, I didn’t want to rock the boat. Our relationship was in a new and precarious position. Two, I figured that as children enter adolescence, they begin to understand that their parents are just people.

“She’s exploring her boundaries. It’s natural,” I told my mother when she first overheard this and cocked her head, one eyebrow arched.

“It’s disrespectful,” she replied and then seeing my expression added, “Well, I’m not going to tell you how to raise your children. You’re a good dad.”

Was I? The truth is, after the divorce, I was rudderless. I was no longer a husband, and even my role as a father was modified. I was the dad who came out — the gay dad.

The dual emotions of guilt and shame I felt after coming out and getting divorced worked as powerful allies against me. I was also beginning to understand that queer people are often relegated to a subset of common terminology; i.e., same-sex marriage instead of just marriage, partner instead of boyfriend or girlfriend, spouse instead of husband or wife. And so I came to accept the name Bill, not Dad.

It’s difficult enough to navigate the turbulent waters of the post-divorce relationship with your children. But mine was complicated even more so by the 700 miles between us when my ex-wife and daughters moved away, and the gulf of acceptance my daughters would need to cross after the revelation of my sexual orientation.

Each 48-hour visit felt like a first date. I wanted the time with Sophie, my 16-year-old, and Marisa, my 14-year-old, to be perfect — dinner, movies, laughter and long walks while discussing deep and meaningful topics. But how could I expect teenagers to agree on a movie without arguing, or answer the question “How is school?” with anything other than “I dunno”? And often the condensed time we spent in my mother’s small house, which she graciously opened up to us for weekend visits, felt like a pressure cooker brimming with too many ingredients that would explode.

“You’re not my father,” Sophie once screamed, and Marisa added, “You don’t even look or dress like my dad anymore.”

This was also true. I had gained 40 pounds through a new bodybuilding routine, shaved my head and grown a goatee — dyed jet black. I was searching for my identity in the gay community, trying on different visages. If the Village People staged a reunion, I could have stood in as the middle-aged biker. And if dates with my daughters felt odd, dating men for the first time was like entering a foreign country with no map, attempting to navigate its twisted streets and decipher its secret language. After a few tragic encounters with other men, I met another gay father named Paul.

Wearing a barn coat and a Brooks Brothers shirt, Paul was the soccer dad next door type who didn’t realize how handsome he was. In person, he looked just like his profile picture, better actually. His dad jokes made his three kids roll their eyes, but I could sense a deep and abiding respect and love that they felt for him. It was eye-opening to me that another gay dad could be — well — just a dad. I was smitten. For the first time in a long while, a tiny glimmer of hope flickered, and I imagined an identity that I had never before considered: being Paul’s husband.

One evening, after we had dated for a few months, Paul watched my face drain of color when my ex-wife called. She had discovered Marisa crying alone in her bedroom. A classmate had scrawled Marisa’s Dad is a faggot on the blackboard.

“I feel like my father has died,” Marisa sobbed.

Paul took my hand and told me to breathe.

“Be the rock, their constant,” he said. “Don’t you think the girls miss their father?” he added.

He was pointing to my shaved head and tugging on my goatee as if to say it was the change in my appearance they were missing, but I understood what he meant.

I stopped shaving my head and started shaving my face, and I started insisting again that my daughters call me Dad, reprimanding them when they misbehaved. They responded with silence. My calls went straight to voice mail. My text messages were left unanswered.

“They do need you,” Paul replied. “Didn’t you have to teach them when they were babies how to sleep on their own by allowing them to scream and cry a little?”

After I disabled their phones, they responded with anger. But at least there was a response. When I picked up my daughters for the Christmas holiday and brought them again to my mother’s house, Marisa narrowed her eyes and said, “You’ve changed.”

I thought about the different ways I could respond, and the first two that bubbled to the surface were silence and anger. It was how I had responded for most of my life, silent about who I was, and angry at the world for not accepting me. What did that teach my children? If I wanted my daughters to understand me, I had to claim my identity and my pride. I needed to accept myself.

When Marisa was a toddler, at night, she used to run into our bedroom and hop into our bed. After many sleepless nights, we put a sleeping bag next to the bed and told her she could sleep there and not disturb us. Somehow we always found each other in the dark, my arm dangling over the bed, her hand in mine.

Late at night over that Christmas holiday, I lay in bed in the tiny upstairs bedroom of my mother’s house, staring through the window at the crescent moon cradled in the arms of a pine. I called Paul and lamented the passage of time and the years lost, never to be regained.

“Dad?” I heard a tiny voice and a gentle knock on my bedroom door.

“Did you hear what she called you, Daddy-O? Call me later,” Paul said and hung up.

Marisa opened the door, ran to my bed, and jumped in.

As I held her small hand in mine, I wondered if perhaps there was some secret part of me that had wanted my daughters to call me Bill. Not because I believed that they were beginning to understand I was not always a father, but because I wanted to believe that they had grown into young adults.

I was forging ahead, exploring an identity that threatened to overtake the man my daughters had always known.

By permitting my daughters to call me Bill, instead of Dad, I hadn’t been preventing the boat from rocking; I was stepping out of it. How terrifying that must have felt for them, and how dismissive it was of me. They needed me to insist that they call me Dad so that they, and I knew they still had one — not just some person — just plain old Dad.

William Dameron is the author of the forthcoming book “The Lie: A Memoir of Two Marriages, Catfishing and Coming Out.”

FacebookshareGoogle+sharePinterestpin it
In San Francisco, the Revival of the Hotel BarLong Before ‘Drag Race,’ There Was Mr. Dan
Latest