A Classical Duo ‘Nerding Out’ on the Cosmos 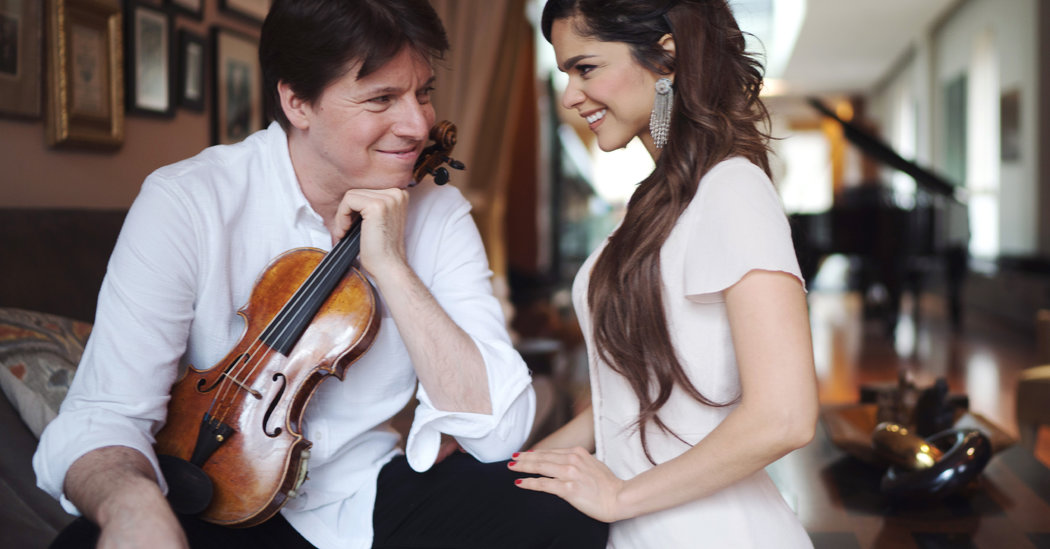 Larisa Martinez and Joshua Bell were married Oct. 5 at their home in Mount Kisco, N.Y. David Brooks, a friend of the couple and a New York Times columnist based in Washington who is a Universal Life minister, officiated.

The bride, 32, a soprano, is a frequent recital partner of the Italian opera singer Andrea Bocelli. She has performed at the Hollywood Bowl, the Kennedy Center and Madison Square Garden. On Oct. 10, she is to make her Carnegie Hall solo debut in Mahler’s “Symphony No. 2” with the Athens Philharmonic and the New York Choral Society. She studied vocal performance at the Music Conservatory of Puerto Rico, graduated with high honors from the University of Puerto Rico and received a master’s degree in voice performance from Mannes the New School for Music.

She is the daughter of Luisa Torres of Toa Baja, P.R., and Dr. Daniel Martinez of Miami; and the stepdaughter of José J. Avilés.

The groom, 51, is the concert violinist and a Grammy Award-winning recording artist who has made more than 40 recordings. He is the music director of the Academy of St Martin-in-the-Fields, the London chamber ensemble. He graduated from Indiana University.

He is the son of Shirley Bell of Bloomington, Ind., and the late Alan P. Bell.

The couple are advocates for classical music education and are among musicians affiliated with Turnaround Arts at the Kennedy Center in Washington and Education Through Music in New York.

Ms. Martinez met Mr. Bell on Dec. 30, 2011, backstage at the Blue Note jazz club in New York after Chris Botti, the trumpet player, and their mutual friend, performed that evening as part of his annual holiday residency.

“I happened to pick the right night,” Mr. Bell said. “I walked into the room and Larisa was sitting on the couch.”

Ms. Martinez was in New York on vacation from Puerto Rico with her best friend, and even made time for a few voice lessons with a teacher at Mannes. She walked right up to Mr. Bell.

“I went to say hello because I knew who he was,” Ms. Martinez said, and told him she had heard him play in San Juan. “He was down-to-earth and engaging,” she said, and when asked, she told him she was a classical singer.

Mr. Bell found her engaging too, but reserved judgment on her singing. “Yeah, yeah O.K., everyone’s a singer,” he recalled thinking.

On New Year’s Day they met for dinner at SushiSamba, a restaurant that was in the Gramercy Park area.

“We were nerding out,” said Ms. Martinez, who had studied environmental science in college, and was in the middle of reading “The Fabric of the Cosmos” by the physicist Brian Greene. Mr. Greene is a friend of Mr. Bell (and to impress her, he later introduced her to him). “We talked about music. We talked about Brian Greene.”

“We laughed a lot,” she added. “He likes puns and jokes and wordplays. I was impressed with how his brain works.”

Mr. Bell took note of the fact that the conversation never flagged. Her living in Puerto Rico was also never an issue.

“I felt like we started something,” Mr. Bell said. “I travel so much, distance doesn’t mean anything.”

When she got back to Puerto Rico they spoke between his concerts, at least once a week. “It was a party every time he would call,” she said. “We would laugh,” and a month later when he played a concert in Florida, she flew out to meet him.

She also had some idea of what a relationship with him could be like. “I understood his lifestyle and art,” she said, and six months later when she started studying at Mannes they were boyfriend and girlfriend.

But one thing still weighed on him. “Music is my life,” he recalled thinking. “I worried about waiting to hear her sing. What if she’s tone deaf?”

He soon got his answer when she sang a Mozart aria, a cappella, to him alone. “It was so beautiful,” he said. “I was relieved, and way beyond. She sang like an angel.”

“She’s really got it all,” he said. “We never run out of things to say. Sometimes when I suggest we watch ‘Homeland,’ she says ‘How about we read some poetry and decipher it. We enjoy ‘Homeland’ too.”

On their seven-year anniversary, Mr. Bell proposed to Ms. Martinez in Chris Botti’s dressing room at the Blue Note.