A Brooklyn ‘Green’ Builder and His Wonderwall 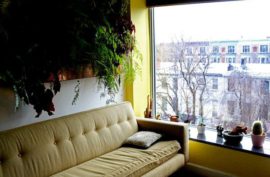 While many townhouses in Carroll Gardens, Brooklyn, are tricked out with glowing Santas and elaborate Nativity scenes, one homeowner has put forth a different decorative concept. Gennaro Brooks-Church, 47, a “green” builder, has covered his house with a patterned wall of plants. He maintains that it is one of the first living facades in New York.

At his house, instead of twinkling lights, rhododendrons, brass buckle, sprinter boxwood and heuchera black pearl celebrate the onset of winter. When the inflatable Mickey Mouse elves go back into storage, Mr. Brooks-Church’s display, completed just before Thanksgiving, will last year-round, with minimal care. An added benefit: as opposed to sucking electricity, the plants will help insulate the home, reducing heating and cooling bills.

The 600-square-foot green exterior is the latest addition to Mr. Brooks-Church’s show-home, which includes a stream on the roof. He lives there with his three children and the family dog.

This is an edited and condensed version of a recent conversation with him.

Q. What inspired you to create the wall?

A. It was a spiritual thing. The magic of nature for me is really strong. People don’t realize how starved for nature they are in this city.

I was reading a lot about global warming, and it was making me depressed. I decided I was going to create my own little world, and in that world, just do positive stuff. That’s why I created this oasis.

I’ve wanted to do this for 10 years, but the technology wasn’t there.I mean, I had a lot of living walls fail on me. The learning curve has been huge. An interior wall has been going strong for seven years.

I put a test wall outside for a year and a half and it worked.

How does it survive the winter?

We picked evergreens habituated to the Northeast climate of hot summers and cold winters. They go semi-dormant, but don’t lose their leaves. When spring comes they pop right back.

The main thing is, I needed something to insulate the roots. They’re in a three-inch substrate of coconut coir, or fiber, and binder. The binder is some sort of silicon that is food-safe, safe to grow food in. I call them brownies because they look like brownies. They hold eight times their weight in water. I can go a week without watering and they are O.K.

How much water do you use?

This system is hooked into the water main, with horizontal irrigation along the roof and above and below the windows. The water is turned on for five minutes, twice a day. It’s kind of like having your kitchen faucet turned on. It’s definitely less than a shower. 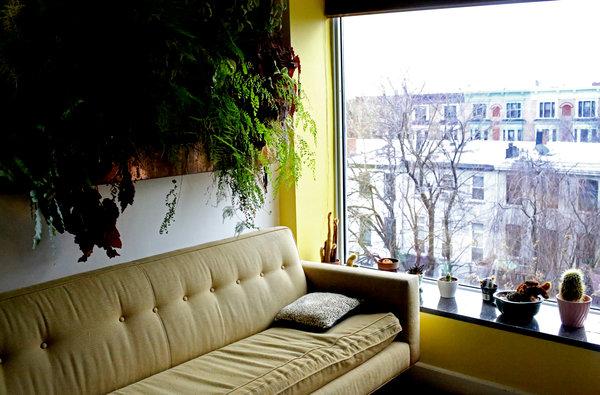 Mr. Gennaro Brooks-Church has had an interior wall for seven years.CreditYana Paskova for The New York Times

I built it so that the water never touches the brick. There is a two-inch space between the living wall and the brick. This allows air to flow. Keeps moisture away. The brick is no longer exposed to the elements, so it’s protected and will last longer.

Why are you doing this?

When I started my building company, I wanted to contribute to making New York City green. I do it through soil remediation and creating living walls.

We bought this house in 2008, and it needed a gut renovation. I did all of it with salvaged materials. People found me online and asked me to renovate their houses. Flooring, kitchens, roofs, insulation, I did it all.

How much would a living wall cost a townhouse owner in New York City?

About $60,000. That’s a lot, but it’s about the same cost to redo your exterior. Including the plants and irrigation, and six months’ free maintenance. After it’s been installed, we need to get up there twice a year to clean up and replace dead plants. It’s about $300 a visit.

What are the pros and cons?

My sex appeal has definitely increased. I’m on social dating apps and they love my living walls.

We haven’t talked about the cons. The plants are living creatures. They require some attention. For example, if there is a break in the timer or clog in the irrigation lines. Some walls require almost no maintenance, and some require more. People are afraid of bugs and wildlife. But we need lots of bugs and birds and butterflies. Diversity should extend further than the color of your skin. It should be diversity of creatures.

My secret desire is for a stork to make its nest on my facade. They make these really cool nests and come back every year. I’m dying for that to happen. Or a falcon.

Besides attracting large nesting birds, what is your goal?

For living walls to cover the city. Living walls are perfect for New York City. We have all this wall space and we aren’t taking advantage of it.

The wall in the morning light.CreditCourtesy of Gennaro Brooks-Church
FacebookshareGoogle+sharePinterestpin it
Medical News Today: What to do when a pill gets stuck in the throatThe Pour: Great Bubbly From England, Believe It or Not
Latest