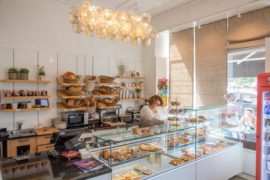 It’s easy to forget that Geneva, a city that’s practically synonymous with international diplomacy, has an identity quite apart from its status as a global hub. But Geneva’s historic heart was already a couple of thousand years old when the United Nations came to town, and the city’s residents — newcomers and natives alike — still fiercely embrace traditions that have been celebrated here for centuries. Paris or Rome it isn’t, but then Geneva isn’t vying to be one of the megastars of Europe. At once deeply Swiss and intrinsically international, the city has carved out its own place in the world, which it occupies with pride.

1) 4 p.m. A victory worth celebrating

Start your visit with a tour of the Maison Tavel, a small museum in Geneva’s Old Town that tells the story of the city through the centuries (free entry). Two highlights: the absorbing audiovisual display on the ground level; and, on the top floor, an architect’s replica of the city center, which occupies an entire room. A recurring theme here is the Duke of Savoy’s surprise attack on the city during a December night in 1602. The Genevois pushed back the invading army, thanks in part — or so legend has it — to a local woman who poured a caldron of hot soup on the French soldiers as they tried to scale the city’s walls. Locals still celebrate this victory every year on a weekend in December, when Old Town’s cobblestone streets reverberate with cannon booms and fill with people parading around in 17th-century dress. This year’s celebrations will take place from Dec. 6 to 8; details www.1602.ch.

Wander downhill from Old Town to Geneva’s first botanic garden, the leafy Parc des Bastions. Near the entrance to the park, and just next to a cluster of giant, outdoor chess boards, you’ll find your destination for dinner: Le Café Restaurant du Parc des Bastions. The restaurant’s greenhouse-like building hosted concerts in the 19th century, and was later transformed into a cinema. Today, it’s a romantic spot for a meal, with an elegant atmosphere and a sophisticated menu that includes beef tartare, housemade foie gras, and perch from Lake Geneva. Dinner for two, from 100 Swiss francs, about $102.

Walk out through the park’s main entrance and catch the tram to Carouge, a stylish neighborhood that was built as a separate city — complete with neo-Classical architecture and a well-planned grid of streets — by the King of Sardinia in the 18th century. Sample the natural wines at Vert Bouteille (from 7 francs per glass), then go next door to catch some live music — anything from jazz to indie to electro-pop — at Le Chat Noir (entry price varies; cocktails from 15 francs). If you get hungry, cross the street for tapas (from 7 francs) with the local crowd at La Plage, or walk a few blocks to Café Équinoxe for a late-night dessert (12 francs).

Geneva’s large Portuguese community has made its mark on the local food scene. Get a taste at L’Epi Doré, a busy, Portuguese-owned cafe that serves homemade pastries to a devoted clientele. Order a café renversé (the Genevois term for a coffee with milk, 3.90 francs) to go with your pastel de nata (2.50 francs), the classic Portuguese custard tart, served here alongside a shaker of cinnamon sugar.

Geneva has a well-deserved reputation for being expensive, but don’t let that scare you off. The Plainpalais neighborhood — a diverse district not far from Old Town — is a good place to look for deals, or at least reasonable prices. On Saturdays, Plainpalais’s locally famous flea market overflows with antiques, clothes, jewelry, and bric-a-brac, with plenty of treasures to be hunted. A few blocks away, you can browse high-end kitchenware and other home goods at Grain de Sel; find a chic baby gift at Poisson Rouge; and shop for classy women’s wear at Pourquoi Pas.

More on traveling in Switzerland …

Restaurants in Geneva tend to be either starchy, white-tablecloth dining rooms or kebab shops. Chez ma Cousine, which has four locations in the city, is a glorious exception. Here, the atmosphere is warm, the food hearty, and the prices reasonable, at least for Switzerland. Order the restaurant’s signature dish: half a roast chicken, served alongside a pile of chunky, well-seasoned roasted potatoes and a heap of perfectly dressed salad greens (15.90 francs). It’s best to book ahead for Saturday lunch, although the smallest location, in Old Town, doesn’t take reservations.

You could argue that Geneva arrived on the global stage in 1863, when the Genevois Henry Dunant and four other Swiss men set up what we know today as the Red Cross, an organization whose emblem — the inverse of the Swiss flag — has become a universal symbol for medical aid. Explore this history, and the Red Cross’s role in assisting soldiers, prisoners, and endangered people around the world, in the small but engrossing International Red Cross and Red Crescent Museum (entry, 15 francs). The museum’s immersive exhibitions explore three pressing humanitarian challenges: defending human dignity, restoring family links and reducing natural risks. Look out for the moving video testimony of a former detainee at Guantánamo Bay.

Set off downhill from the museum and walk around the corner to the Broken Chair sculpture, which sits at one end of a long row of flags leading to the Palais des Nations, the European headquarters of the United Nations. Carry on down the slope to the enchanting and often-overlooked Botanical Garden, where dahlias, asters and autumn daffodils come into bloom as summer draws to a close. At the bottom of the garden, look for the small underground walkway that takes you below the traffic on Rue de Lausanne and straight to the edge of Lake Geneva (or Lac Léman, as it’s called in French). Keeping the lake on your left, walk past the lawn of the World Trade Organization, continue through the landscaped Parc Mon Repos, and finally stroll along the Quai Wilson, where you can take in a view of Geneva’s 460-foot-tall fountain, the Jet d’Eau, across the lake.

Let’s hope the walk has warmed you up, because it’s time to disrobe: You’ve arrived at the Bains des Pâquis, a jetty sitting atop Lake Geneva that hosts a popular sauna and bathhouse from mid-September to the end of May. You can wear your bathing suit if you’re squeamish, but you’ll be in the minority, as most Genevois — especially the men — enjoy their bain completely in the nude. Start off in the steam bath (hammam), then roast in the sauna before taking a jump in the lake, which on a typical day in mid-September hovers around 68 degrees Fahrenheit (entry, 20 francs, plus 5 francs to rent a towel).

Yes, it’s true: The Swiss enjoy a good fondue. And you can too, at the casual, semi-outdoor restaurant, La Buvette des Bains, that’s a few steps from the sauna. Just make sure you follow the rules: never have a fondue if the weather’s warm, unless you want to immediately identify yourself as a tourist; drink only white wine or herbal tea as you eat, never beer or water (the Swiss swear this will help you avoid a post-fondue stomachache); and finally, at the end of the meal, be sure to scrape off and savor what the Genevois call la réligieuse, the golden, crunchy crust on the bottom of the pot. Stagger out of the restaurant, then do your best to make it to bed before the cheese coma hits (fondue, 25 francs; call ahead to reserve).

Most places in Geneva are closed on Sundays, so follow the locals and head for the hills. Your destination this morning is Mont Salève, the small (by Alpine standards), but statuesque, mountain that serves as the backdrop to most photos of the city’s skyline. To get to the base, either drive or catch the Number 8 bus to Veyrier, then walk across the border to France (that’s right, Salève is not actually in Switzerland). Buy a ticket for the cable car, the Téléphérique du Salève (return trip 11.90 euros, or about $13), which will whisk you up to 3,600 feet. Enjoy the expansive views of the city, its lake and the Jura mountains in the distance, then set off on the two-hour “balcony” hike, a gentle walk through forest and farmland that will reward you with views of Mont Blanc, if the weather’s good. (Ask for a hiking guide when you buy your cable car ticket.)

Wrap up your wanderings at L’Observatoire, a cozy restaurant that’s about a 25-minute walk from the top of the cable car. Dive into a generous burger and fries as you rest your legs and take in the views. It’s a popular spot on the weekend, so be sure to call ahead; ask for a table by the window. Lunch, about 20 to 25 euros.

If you’d like to brush shoulders with some international pooh-bahs, then book a room at the InterContinental, Geneva’s go-to spot for high-level peace talks and news conferences. Double rooms without breakfast start from 367 francs.

For a homier stay, consider the Hôtel Auberge Communale in Carouge, which offers double rooms for 180 francs, breakfast included.

Or to feel like a local, rent an apartment in either Plainpalais or Carouge, both lively and walkable neighborhoods with good transit links. Prices on Airbnb in those areas start from around 100 francs per night.